Emanuel a "skeptic" of saying right thing about Manhattan mosque 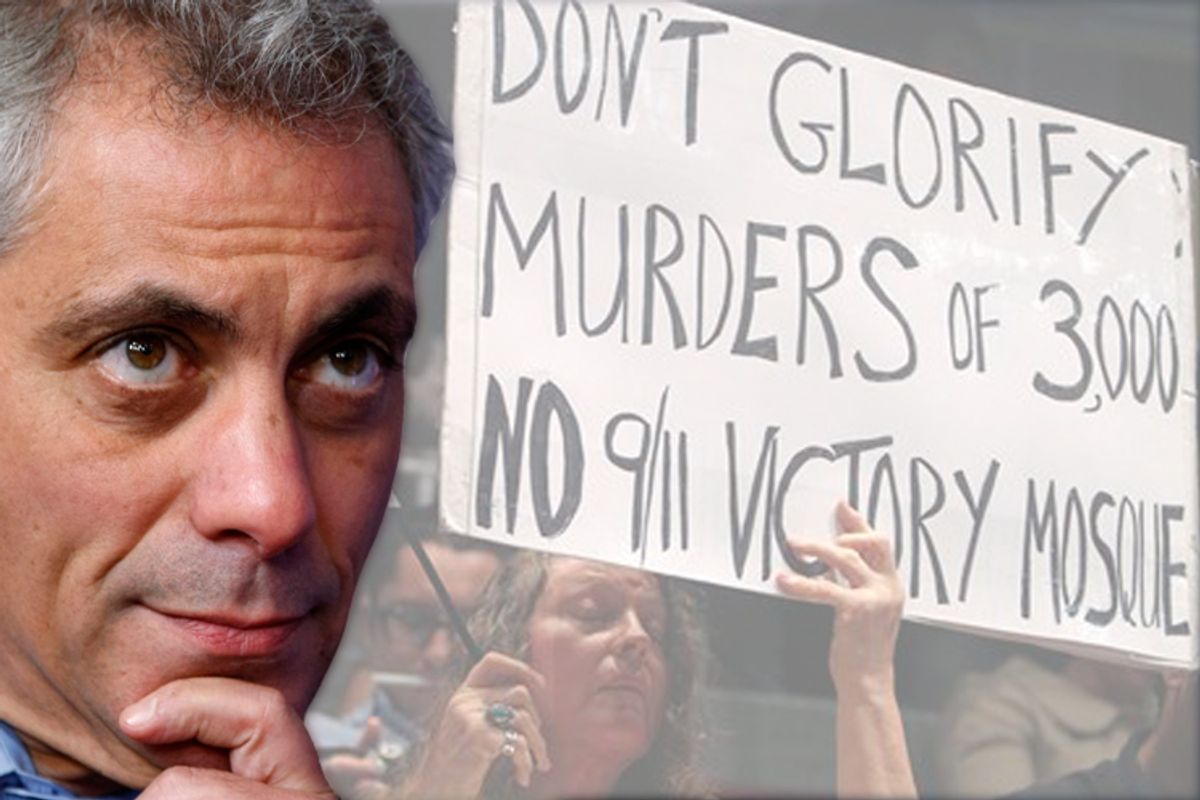 Shocker: According to the Daily News, White House Chief of Staff Rahm Emanuel urged President Obama not to say anything about the Park 51 project, a proposed Islamic community center and place of worship to be built in lower Manhattan, near the former site of the World Trade Center.

The president explained that Muslims have as much a right to build places of worship on private property as anyone else, which is a very controversial statement, because Sarah Palin said "9/11" a hundred times on Twitter.

We probably shouldn't read too much into this vague account, but on the other hand, it does jibe with basically everything we know about Emanuel:

Obama went ahead with the Ramadan dinner remarks even though his top political advisers had not reached a consensus on what he should do. Emanuel was one of the skeptics.

The president has been blamed for making the controversy over the project into a national issue, because he said something reasonable after Newt Gingrich had been squawking hysterically about it for weeks.

Meanwhile, Park51's "social media consultant" has come under fire for operating an insufficiently deferential Twitter account. Anti-Park 51 activists from as far afield as the Netherlands will gather at the actual site of the World Trade Center, on 9/11, to protest the existence of Muslims in New York City. Clownish perennial New York Republican candidate Rick Lazio is now just straight-up using footage of the smoking wreckage in a campaign ad. Rand Paul is against the project, though not, like, seriously against, it, just enough against it to register his discomfort with Muslims building things in New York City. In Ohio, the Democratic Senate candidate said this is an issue for New Yorkers to deal with, but freedom of religion makes America great. The Republican candidate said the Muslims are disrespecting 9/11 families, and called Park Place between West Broadway and Church Street, in Manhattan, "sacred ground." The National Review praises the Republican candidate's statement, arguing that it "probably sums up the feelings of most Ohioans on the subject" of the sensitivity toward 9/11 victims, or lack thereof, of a proposed construction project that is not in Ohio.

Ben Smith notes that we are not all New Yorkers, anymore. (Honestly, we are maybe all Staten Islanders, now.)