Who will stand up to the GOP's war on Islam?

If we don't stop the hysteria soon, bin Laden will score one of his biggest propaganda victories yet 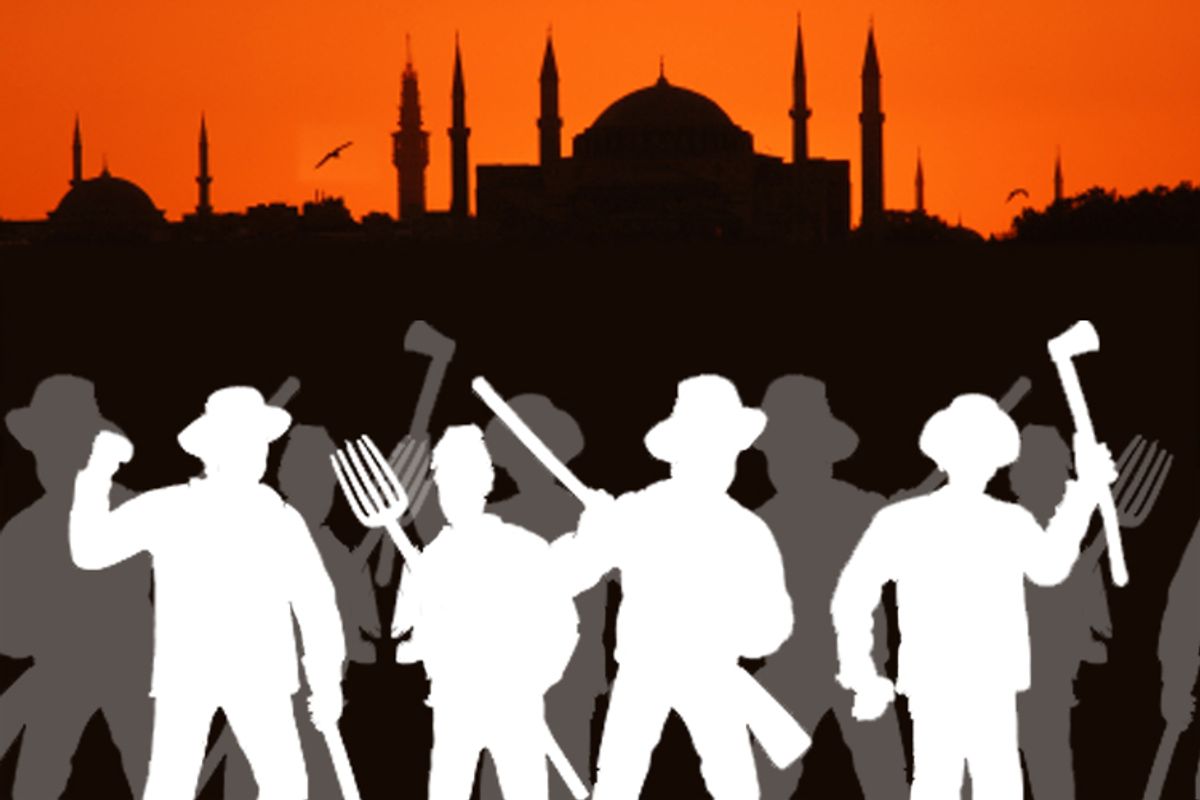 "It does me no injury for my neighbour to say there are 20 gods or no god. It neither picks my pocket, nor breaks my leg."

Maybe Republican savants who want to repeal the 14th Amendment should refudiate the First Amendment while they’re at it. That would simplify things enormously. No more of this foolishness about due process and equal protection of the law. A citizen would be anybody Sen. Lindsey Graham and Newt Gingrich deem worthy.

Religious rights could be left to Sarah Palin. The First Amendment clearly confuses and annoys many of her followers. "Congress shall make no law respecting an establishment of religion, or prohibiting the free exercise thereof." "Respecting"? "Thereof"? It kinda sounds like some of that Washington elitist talk there we’ve been hearin'.

Palin could post a new amendment on Twitter: "Our God is red hot; your God ain’t doodley squat."

OK, enough jokes. Even granting that more people are nuts on the subject of religion than all other topics combined, this entire ginned-up controversy about the planned construction of an Islamic cultural center in the vicinity of ground zero in Lower Manhattan illustrates the Founding Fathers’ wisdom like no other. No establishing, no prohibiting, period.

Also, alas, it highlights the sheer cynicism of the GOP politicians pressing it as an election-year "wedge" issue.

Regardless of how hard they try to disguise it, if only from themselves, those who would forbid the project express an essentially tribal view of Americanism specifically repudiated by the U.S. Constitution. "Is there any reason to oppose the mosque that isn't bigoted, or demagogic, or unconstitutional?" asks Michael Kinsley. "None that I've heard or read."

Make that two of us. Regardless of motive, it’s all about "prohibiting the free exercise" of somebody else’s religion. The End.

Actually, I’d go further. Are there any arguments against the project that don’t also violate the elementary distinction between "some vs. all" we were all supposed to learn in sixth grade? None that I’ve seen. Broadly speaking, the loftier the rhetoric the more craven the appeal to primitive concepts like the collective guilt of the world’s 1.4 billion Muslims for 9/11, a deranged act of mass murder committed by a tiny heretical sect.

Take, for example, the Washington Post’s Charles Krauthammer. In the course of designating ground zero "hallowed ground," which few would deny, the columnist likens 9/11 to the Holocaust. "Islam is no more intrinsically Islamist than present-day Germany is Nazi," he concedes, "yet despite contemporary Germany's innocence, no German of goodwill would even think of proposing a German cultural center at, say, Treblinka."

No, but that’s because Treblinka’s in Poland. In contrast, the Muslims proposing to build Cordoba House are American citizens, just like Krauthammer (Canadian by birth) and me. Come to think of it, the Nazis were also nominally Christians. But let’s not go there. Krauthammer’s analogy fails at the most elementary level, a transparent attempt to shift blame from al-Qaida to Islam while pretending otherwise.

That said, as President Dagwood Bumstead ... um, make that Barack Obama hinted by "clarifying" his ringing declaration that "Muslims have the same right to practice their religion as everyone else in this country," few would object if they practiced it a bit farther away. (Never mind that there are mosques inside the Pentagon, also struck on 9/11, to accommodate Muslims engaged in fighting terrorism.) How far from ground zero would be appropriate?

To ask the question is to demonstrate its absurdity. Presumably the answer would be somewhere between the 2.5 dense city blocks where Cordoba House is planned on the site of an abandoned garment factory, and 10 blocks away in Tribeca where Imam Faisal Abdul Rauf has led a congregation for 27 years. Either way, the proposed mosque would be invisible from ground zero and vice versa.

Regardless, now that the issue’s joined, President Obama’s stuck with it. Insulting our Muslim allies and giving Osama bin Laden a huge propaganda victory by making the struggle against terrorism appear to be a war against Islam -- exactly as he claims -- would be a strategic disaster.

Recognizing that very danger, Joe Conason points out, was always one of President George W. Bush’s virtues. Generally speaking, silence has become him since January 2009. But his party has now gone badly astray, and he owes it to the country to say so.