Heroes, villains and cowards of the so-called "ground zero mosque"

Who's defended religious liberty, who's been too scared to, and who truly hates our founding principles? 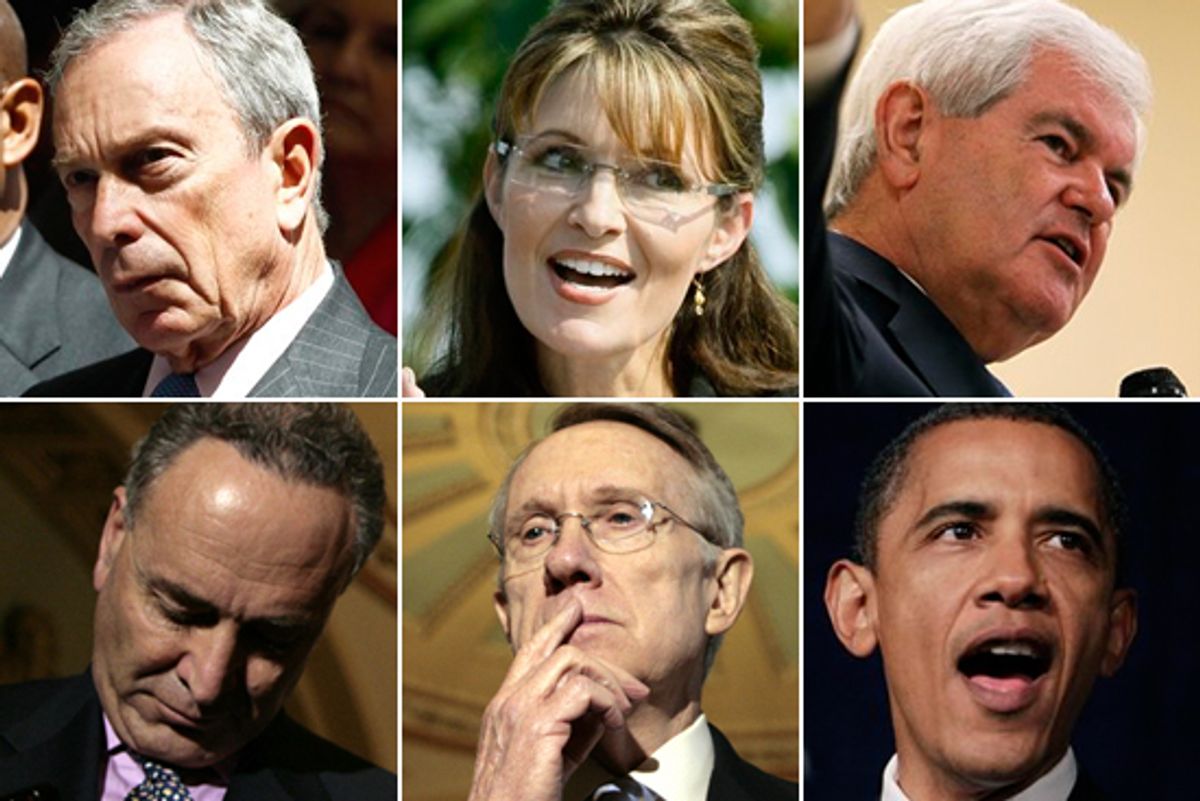 The bizarre, ginned-up controversy surrounding the Park51 project -- a proposed Islamic community center, like the 92nd Street Y, including a space for worship, to be built at the site of an old Burlington Coat Factory (which is a store, not a factory) on Park Place in lower Manhattan, near, but not in sight of, the site of the World Trade Center -- has exposed not just the blatant Islamophobia (and cheerful willingness to exploit bigotry) of many luminaries of the right, but also the cowardice of many supposed liberals. Just so we know where we stand, and using, as criteria for placement, my own inexact impressions of their public statements, I present the official War Room lists of "ground zero mosque" heroes, villains and cowards.

It's not a particularly hard case to make: The Constitution guarantees the right of the Cordoba Initiative to construct a house of worship on private land without any interference from the government, "Muslims" as a whole did not attack "us" on 9/11, Feisal Abdul Rauf is a well-respected, progressive imam with a history of performing outreach for the Bush administration, and even if the project was a "ground zero mosque," celebrating its construction would demonstrate an admirable commitment to the founding ideals that we are supposedly fighting for Over There. At a time when Islamophobia appears to be on the rise, in part because xenophobia always tends to get louder during periods of economic uncertainty, liberals and progressives should be forcefully making the case for tolerance and liberty. But only a couple have bothered. Still, we should celebrate them!

Rep. Jerry Nadler, whose district actually includes ground zero, has been a loud and unflinching supporter of the project. He makes the case well, and without tossing in wishy-washy qualifications:

Mayor Michael Bloomberg's speech in support of the Park51 project has been rightly celebrated as a courageous moral and intellectual defense of religious freedom.

Outside of New York, Sen. Russ Feingold accused mosque opponents of "gutter politics" and affirmed his support for "freedom of religion," the simple answer that all Democratic politicians and candidates should give. Minnesota's Al Franken also attacked opponents, and even cracked a joke.

I think the best response for a non-New York politician to give is probably Sherrod Brown's. Brown said, first of all, that it's a local, New York issue, which it is, and also said, "We're not at war with a religion," which is the sort of thing that needs to be said, constantly, by people with consciences, in order to rebut assholes like Gingrich.

Pennsylvania candidate Joe Sestak has been accused of "dodging" the question, but his answer seems straightforward to me: He believes it's a New York issue and he supports the Constitution. (He has received the endorsement of Michael Bloomberg.)

Some perhaps surprising heroes include Grover Norquist, who makes the political case for supporting the project, and Ted Olson, a longtime Republican attorney whose wife died on 9/11. Olson forthrightly said, "We don't want to turn an act of hate against us by extremists into an act of intolerance for people of religious faith."

The coward's usual formulation of wishy-washy nonsupport is to proclaim that "they have a right to build it, but ..." While I'd argue that even if you don't feel like issuing a spirited defense of the specific project being debated, you can simply stop at "they have a right to build it" and retain some dignity, these politicians seem to think that they have to balance their respect for the Constitution with a healthy dose of skepticism about Muslims and acknowledged sympathy for hysterical opponents whipped up into a frenzy by lying propagandists.

Harry Reid decided to point out that while the First Amendment protects the rights of religious minorities to practice their religion, that doesn't mean that they should practice it where it might upset someone.

Howard Dean, too, thinks that religious minorities should respect the wishes of majorities of Americans and not go around building houses of worship in places where Americans don't want them. (Memo to Gov. Dean: One of the reasons so many Americans polled about the subject are opposed to it is because right-wing liars defined the entire debate from Day One. If you'd polled everyone in the nation back in, say, March, and asked, "Should there be an Islamic community center with a pool and an auditorium in lower Manhattan near City Hall and, yes, the WTC site?" I'm guessing it would've been a three-way split between support, oppose and don't give a shit. And even if "oppose" had still won that theoretical poll, it still wouldn't have been a good reason for the organizers to be more "sensitive" and find a new building.)

Some New York Democrats are just completely punting on the issue. Anthony Weiner refused to say anything about it for weeks, then issued a baffling letter that says nothing. Chuck Schumer, a man who stands no chance of losing reelection, and from whom a defense of religious liberties would've been celebrated and important, will only say he isn't opposed to the project.

They are mostly the obvious ones: Sarah Palin, Newt Gingrich, Rudy Giuliani -- all Republicans with a history of exploiting racial and ethnic tensions and resentments without regard for the consequences.

New York Democrats John Hall, Tim Bishop, Mike McMahon and Mike Arcuri all decided their best shot at reelection was joining the chorus against the project. Cowardice may have inspired them, but Arcuri's move, in particular, seems more villainous.

Rand Paul, supposed libertarian, thinks Muslims should give money to 9/11 memorials, presumably because of collective guilt, rather than construct community centers in their communities. (His opponent, Jack Conway, is a simple coward.)

Supposed Democrat Jeff Greene proved his independence from the party bigwigs by being grossly bigoted in the name of sensitivity to 9/11 victims he invented, in his head, while mangling the geography of lower Manhattan.:

The proposed $100 million Muslim center offered one such contrast. Greene echoed President Barack Obama's recent defense of religious freedom but said, "When those families go to mourn their losses, they shouldn't be looking at a mosque right there.''

(His opponent, Kendrick Meek, merely said he wouldn't "step in front of a decision that's already been made in New York City," which is halfway between cowardly and acceptable.)

The Confused, and Confusing

I think New York politicians have a responsibility to defend the project itself, while I'll let most non-New Yorkers off the hook for stopping at a defense of the principles involved (as long as they don't add a Reid-ian "but ...") and an acknowledgment that it's a "New York issue." But what about New Jersey politicians?

Well, who can even say where Chris Christie stands. The Republican New Jersey governor was celebrated for seeming to support the mosque, but his statement was actually just a defense of how independent and awesome Chris Christie is with a stupid and nonsensical "pox on both houses" line thrown in.

New Jersey Sen. Robert Menendez supports the Constitution, but then changes the subject to jobs, the economy, etc.

Back in New York, Carolyn Maloney and her primary opponent, Reshma Saujani, both signaled their support for the project, but Saujani (a born panderer) supports it super hard, and claims Maloney only kinda supports it. I'm not convinced by Saujani's argument, but you can read Maloney's statement for yourself.

I might need to invent a separate "I think he actually means well but what the hell" category for Gov. David Paterson, who is, I think, trying very hard to be a peacemaker, as part of his "fuck it, I'm out of office soon anyway" tour '10. But his claims that he will give state land to the developers (which would be constitutionally iffy) and his repeated insistence that he's meeting with Cordoba Initiative representatives about moving the site (which they keep disputing) are just serving to support the idea that there's some compelling reason why they should move.

Kristen Gillibrand's support for the project seems halfhearted and overly cautious, but it's there.

And, yes, then there's the president. Had he stopped at his Friday night statement, a simple defense of religious liberty, I'd happily put him in the heroes category. But his Saturday non-clarification, stressing the fact that he doesn't explicitly support the project, completely muddied the issue. Was it a walk-back? Sort of! But also not quite! His response is a Rorschach test, and interpretations of it necessarily depend on impressions of the president himself.

The heroes list is depressingly short, the cowards and villains lists populated with people I wish weren't included, and while I understand that defending the project could be interpreted as "politicizing" the issue, I'm still depressed at how few "progressive" leaders are unable to mount simple, surprisingly necessary defenses of the fundamental rights of Americans to worship, or not, as they see fit.