For Indian-American pols, the "What are you?" test

How "American" do you need to be to win an election? 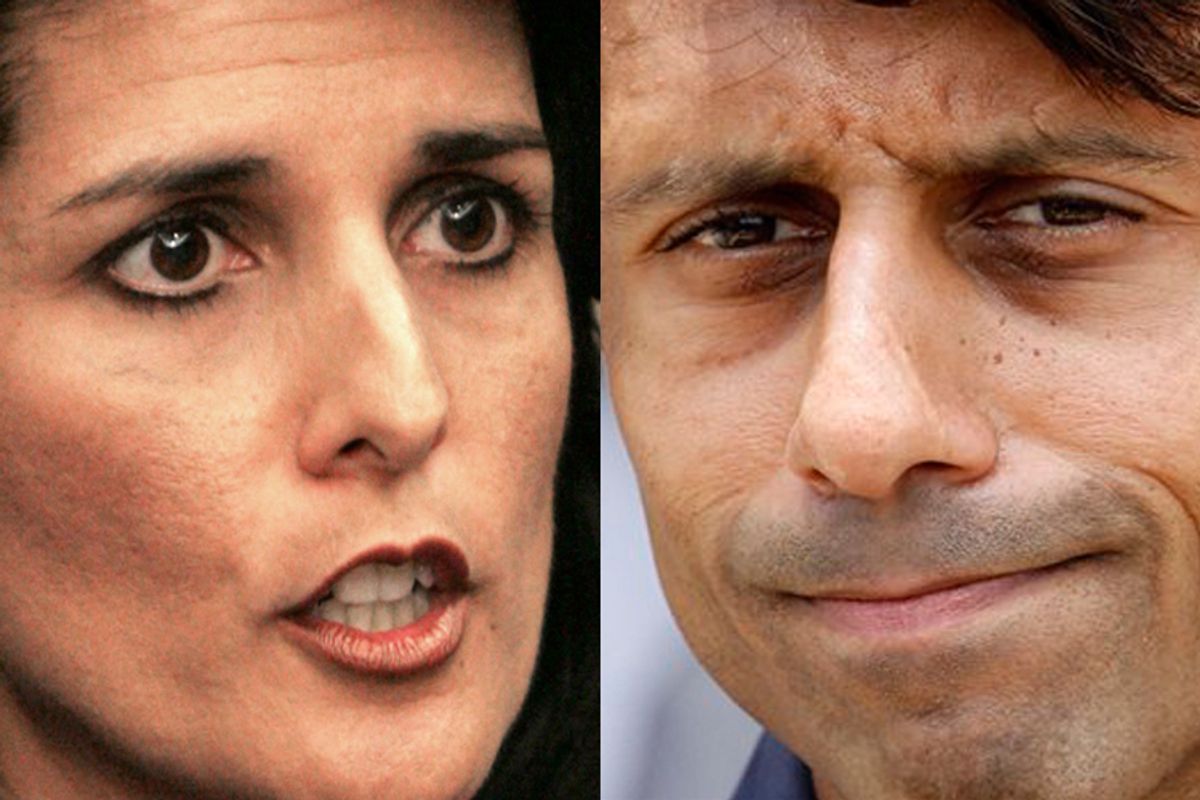 She Anglicized her name, became a Christian, and was heralded as a Mama Grizzly by Sarah Palin -- and now Nikki Haley is the overwhelming favorite to be the next Republican governor of South Carolina.

"You learn to try and show people how you’re more alike than you are different," Haley, who was born Nimrata Randhawa into an Indian Sikh family, admitted to the New York Times earlier this year.

Bobby Jindal, raised in an Indian Hindu family in Baton Rouge, changed his name and converted to Catholicism. Now, Louisiana’s Republican governor is regarded as a potential candidate for his party’s presidential nomination.

When asked by "60 Minutes" last year if they follow any Indian traditions, Jindal and his wife insisted that "we were raised as Americans, we were raised as Louisianans, so that’s how we live our lives."

There’s no doubt that the religious conversions of Haley and Jindal, the two most prominent Indian-American politicians, have powerful personal and spiritual roots. But it’s also inarguable that being Christians with Anglicized names has made it easier for them to create bonds with the overwhelmingly white and deeply religious voters who dominate Republican politics in the South.

That basic imperative, to project an identity that voters aren’t threatened by, is one that all minority candidates in all regions of the country can relate to. But for Indian-Americans, who are only now stepping into American politics in sizable numbers, figuring out how to do so is still a work in progress.

Indian-Americans, the fastest growing Asian group in the United States, make up a little over three million of the country’s population. But only two -- Jindal and Dalip Singh Saund, A Democrat who represented a California district from 1957 to 1963 -- have ever served in Congress. This year, though, there are an unprecedented six Indian-American candidates, all Democrats, are running for the House. And with Jindal and Haley generating national attention, the prominence of Indian-American politicians has never been greater.

And while one might assume that cultural conformity would be more important to Republicans, given the party’s conservative, tradition-minded base, Indian-American Democratic candidates can be just as quick to prove their American assimilation to voters.

When House candidate Raj Goyle was asked about his background, the first sentence out of Kansan Democrat’s mouth was, "I’m a native." He went on to describe his parent’s immigration to the states in 1970 and his six-month old daughter, who was born "right here in Wichita." He also pointed out that his mother, who runs a medical clinic with his father, has delivered over 5,000 Kansans.

Political experts like James Pappachen, an Indian-American raised in the South who now runs a Democratic political group, say there’s a need for Indian-American candidates to emphasize shared similarities.

" In the Indian-American community, especially where there aren’t a lot of folks that look like us, there’s sort of this struggle to say ‘I’m like you, I’m not an outsider,’" he says " It’s more of a struggle to prove affinity to prove that you are, in fact, " white" like the others, that you’re just a good neighbor."

Though candidates try to downplay the still strong presence of identity politics, it’s clear that that there are still some racial tensions to overcome. After all, Haley this spring was derided as a "raghead" by a fellow South Carolina Republican, while Goyle was branded an "evil" "turban topper" by his Republican foe, Mike Pompeo.

Another image-crafting challenge involves building a narrative that answers the question of ethnic ambiguity.

Obviously aware of this, Reshma Saujani, who is challenging incumbent Democratic Rep. Carolyn Maloney in New York, has the following tagline on her campaign website: I am a dedicated Democrat, a community activist, a Yale University legal scholar, and an attorney in New York City. But first and foremost, I am the daughter of political refugees whose story embodies the promise of life in America.

"I’m a New Yorker first," Saujani says when asked about her Indian-American background. "I don’t have a hierarchy. I think people have multiple identities who make up who they are."

Because Indian-Americans have all sorts of features and complexions, they also have to figure out how to answer the "what are you?" question early on. Preeti Kulkarni, a board member of Asian Pacific Americans for Progress, recalls a discussion with friends from her days at Duke University in North Carolina.

"One guy said in this discussion, I just think of my Indian girlfriend as a white girl with a tan."

Haley has been able to strategically place herself in the "white" or "non-white" category at her convenience. For instance, when the NAACP mounted a campaign to remove the Confederate flag from the front of the South Carolina State House, Haley said she would not succumb to the pressure to re-address the issue -- a stance that endeared her to many white conservatives. But later, when discussing the issue in a YouTube video, she played up her ethnic background: "I think I’m the perfect person to deal with the boycott because as a minority female I can go and talk to them. And I’m gonna go and let them know that every state has their traditions and every state has certain things that they hold as part of their heritage."

If anything, Kulkarni notes, Haley’s ethnic roots helped her on this issue. "For Republicans, it’s nice to have a candidate who can tell you they want the Confederate flag on the state house, and it’s even better to hear that from a person of color."

The receptiveness of white South Carolinians to Haley and her campaign is particularly remarkable when one considers the stark racial gap in 2008, when Barack Obama won 96 percent of the black vote in South Carolina and just 26 percent of the white vote. (Overall, he received 45 percent of the statewide vote.) Haley, by contrast, snagged 65 percent of the vote in this year’s GOP gubernatorial runoff, a contest in which white voters dominated the electorate, and she’s running 14 points ahead of her general election opponent in a recent poll.

Kulkarni says Jindal and Haley have achieved their success without significant support from the Indian community, and without subscribing to the politics that ,she says, are generally representative of the community.

But Anil Mammen, a Democratic political strategist who has worked with numerous Indian American candidates, notes, unlike other minority groups, most Indian-Americans haven’t needed the Indian vote to win. Hispanic candidates, for instance, often run in places with high Hispanic voting age populations. But Indian-Americans don’t account for a large share of any states or districts.

What makes this year so exciting for Indian-Americans is the high quality of candidates running, according to Dino Teppara, the chairman of the Indian-American Conservative Council. Many credit this to Indians finally "coming of age" politically. Chaudhuri says many of this year’s Indian candidates were inspired by Obama and the race politics he overcame. "Add to that gains in strength, political sophistication, institutional capacity and an expanded coalition and it’s a perfect storm," he says.

Mammen says he can’t pinpoint the success of Indian-American candidates in this year’s primaries, but he does point out the simple math: Immigrants first came in the 1960s, followed by big spurts in the ‘70s. Their children, who are now in their 30s and 40s, are finally coming of age to run for office. And those who are born here, Mammen believes, are far more likely to run for political office.

"It takes a generation before you develop the economic means and cultural sense of security before you can put yourself in a position where you can make the claim that you can represent these districts," he says.

Plus, as Kulkarni points out, this year’s Indian-American candidates have "come up through the ranks," garnering significant grassroots support, which has been critical in their campaigns.

And this year’s bumper crop of Indian candidates may just be the start.

"There’s a much, much larger wave of Indian-Americans coming, which is going to make what we currently have look very, very small," says Sanjay Puri, Chairman of U.S.-India Political Action Committee. "It used to be that Indian Americans wanted to be doctors or engineers. That’s long gone. It’s hip and cool to be in politics now."