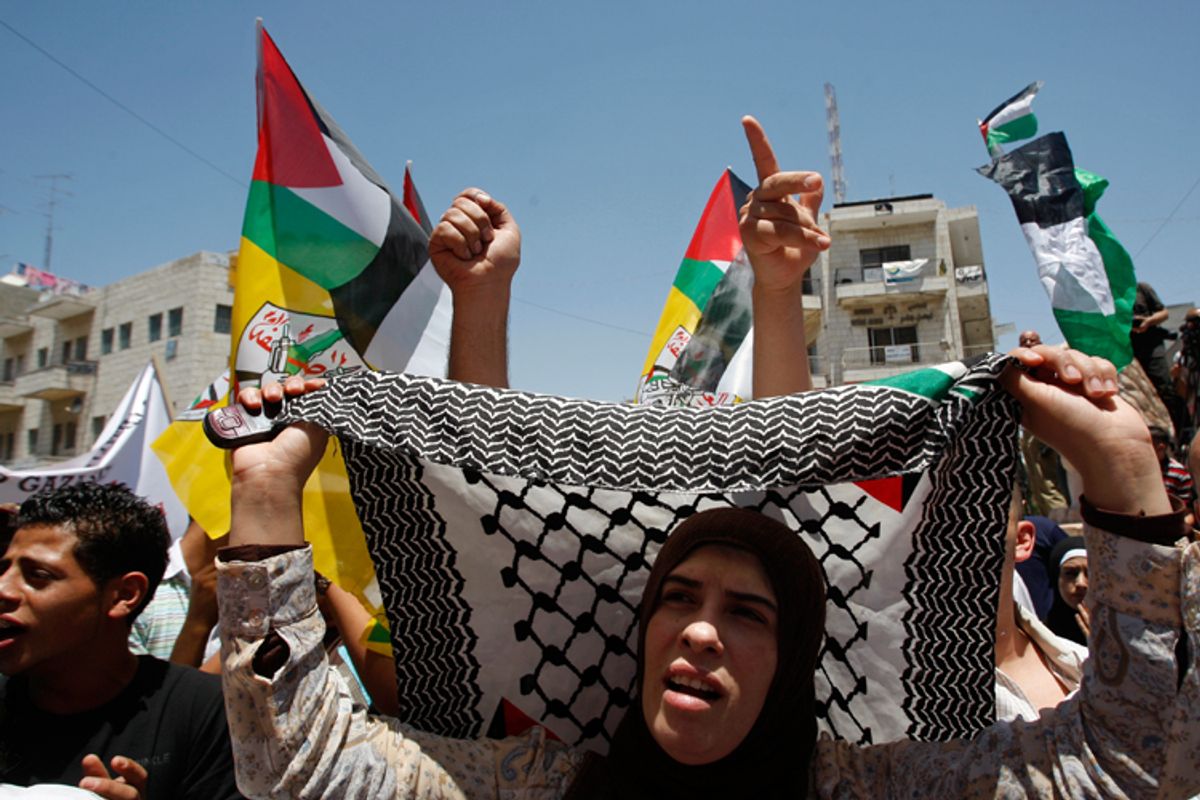 The refrain from Israeli politicians and the country’s allies and apologists is familiar: There can be no peace deal until the Palestinians "recognize" Israel as "a Jewish state." While this can sound reasonable to the casual listener in the West, this demand actually points to critical flaws in the "peace process" and the way in which the international community approaches the Palestine/Israel question.

This is because such a demand, and understanding why it is so unacceptable to Palestinians, means going back to 1948 -- when hundreds of Palestinian towns and villages were destroyed, their inhabitants forbidden from returning by the new Jewish state -- and throwing the spotlight on two groups of Palestinians that the so-called peace process has ignored or marginalized: the refugees of '48 (and their descendants) and the Palestinian minority that's left inside Israel. The unpleasant reality is that Israel as "a Jewish state" means the permanent exile and dispossession of the former, and the colonial control of the latter.

In the West, even talking about Palestinian citizens inside Israel risks confusion, since for so long they have been referred to as "Israeli Arabs" or "Arab Israelis." This is a formulation intended to obfuscate their Palestinian identity, a discursive erasure symbolic of far more brutal methods (some of which are described below). The lack of attention paid to the issues faced by Palestinians in Israel by Western politicians and pundits is unfortunate, since their historic and contemporary reality radically undermines the well-worn cliché that Israel is "the only democracy in the Middle East."

The Palestinian minority (around 20 percent of the population) are those who managed to remain inside the Jewish state after the expulsions of 1948, events described in Arabic as al-Nakba, or "The Catastrophe." With their society shattered -- at least 85 percent of Palestinians in what became Israel were expelled -- the minority was then subjected to military rule until 1966. This martial law combined with legislation passed in the Knesset to effect what is perhaps the defining dynamic in the relationship between the Jewish state and its Arab minority: land confiscation.

By the mid-1970s, the average Arab community inside Israel had lost between 65 and 75 percent of its land (see, for example, Ian Lustick’s 1980 study "Arabs in the Jewish State"). Policies that nowadays most people associate with Israel’s regime in the West Bank -- seizure of Palestinian land in order to build Jewish settlements -- have been routine inside Israel with regards to the Palestinian minority. Since 1948, around 1,000 Jewish communities have been created in Israel -- but not one Arab town. Arab municipal communities make up 2.5 percent of state land, though the Palestinian minority has grown seven-fold.

The legislative and legal processes that the Israeli state implemented in order to expropriate the land of the Palestinian refugees also meant that some citizens -- about one in four of the Palestinian minority -- became known as "present absentees." This means that their property was confiscated even though they remained in the borders of the new state. Meanwhile, across Israel, tens of thousands of citizens live in "unrecognized villages," a result of planning and zoning by the state that categorized land as non-residential despite the presence of Arab villages. Many of these communities can be found in the Negev, where Bedouin Palestinians live unconnected to basic utilities, and at risk of home demolitions.

Just recently, the entire unrecognized village of al-Araqib was destroyed repeatedly, at the same time as the Israeli Knesset approved legislation intended to legalize and facilitate Jewish farms that had been established in the Negev. The context here, as well as in the Galilee, is the strategic aim of "Judaization": increasing the Jewish presence in regions of the state deemed to have "too high" a proportion of Palestinian citizens. In the words of Haim Yacobi of Ben Gurion University, it is a "[project] driven by the Zionist premise that Israel is a territory and a state that 'belongs' to, and only to, the Jewish people." Yeela Raanan, of the Regional Council for the Unrecognized Villages, surveyed the ruins of al-Araqib and said: "Redeeming the land is part of the Zionist project. Any land held or claimed by Arabs is a problem."

A political party or movement that calls for more of the "right" people in a particular area because there are too many of the "wrong" people is rightly considered fanatical. Yet in Israel, this has been policy at a state and local level for over 60 years and it is part of mainstream discourse to talk of the Arab minority as an intrinsic "threat." Netanyahu, as finance minister in 2003, described Palestinian citizens as a "demographic problem." Last year, Israel’s housing minister declared it a "national duty" to "prevent the spread" of Palestinian citizens, since in the Galilee "populations that should not mix are spreading there."

To document all the ways in which Israel’s regime of control keeps Palestinians as second-class citizens is beyond the scope of this article: It is far deeper and more systematic than the "complaints of discrimination" that the likes of the BBC and CNN tack on at the end of news items. Take "selection committees," for example, which decide who gains admission to small communities based on criteria like "social suitability," a setup that operates in hundreds of agricultural and community towns (over two-thirds of all the towns in Israel). Its use as a tool to exclude Palestinians has been made more explicit recently, with legislative efforts intended to "allow the rejection of Arab residences in small Jewish communities."

This is only one of a recent rush of racist bills in the Knesset (the indispensable Adalah have also compiled a list of "10 Discriminatory Laws"). The same Knesset has stripped Arab MK Haneen Zoubi of parliamentary privileges, by way of punishing her for participating in the Gaza flotilla. Zoubi was almost physically assaulted in the chamber, as she faced cries of "Go to Gaza, traitor." Other Palestinian members of the Knesset received an e-mail from MK Michael Ben-Ari announcing that "after we take care of her [Zoubi] it will be your turn."

In Israel in 2010, human rights defenders are persecuted. Three months ago, Ameer Makhoul, director of Arab NGO network Ittijah, was snatched from his house in the night, and for almost two weeks, prevented from meeting his lawyers. A year before, Makhoul had been told by a Shin Bet agent (Israel’s domestic intelligence agency) that "next time" he will "have to say goodbye to his family since he will leave them for a long time." In 2007, the Shin Bet confirmed they would "thwart" those who "harm" the Jewish character of the state, "even if such activity is sanctioned by the law." As Makhoul’s wife, Janan Abdu, told me in Haifa recently, her husband had become well-known for what he has been saying about Israel -- "the land regime, citizenship issues, what’s happening in the Negev, about the contradictions between being 'Jewish' and 'democratic.'"

This is the question that many Western media outlets won’t touch, and most politicians dismiss with platitudes. The Palestinians in Israel are forgotten, particularly in terms of the international community’s peace process, despite -- or realistically, because of -- the way in which their struggles relate to what happened in 1948 and the meaning of creating a Jewish state in Palestine. This is the conversation that needs to take place, and increasingly is, from academia to activists. Talking with Haneen Zoubi at her home in Nazareth, the MK made an observation that needs heeding in Washington: "Israel’s treatment of its Palestinian minority is the more credible test of chances for a comprehensive peace." So far, it doesn’t look good.

Ben White is a freelance journalist and writer, specializing in Palestine/Israel. His articles have appeared in The Guardian online's "Comment is free," Al-Jazeera English, New Statesman, Electronic Intifada, and Middle East International.