I'm an unemployed dad without much power. But there's one place I can exert control: The checkout line 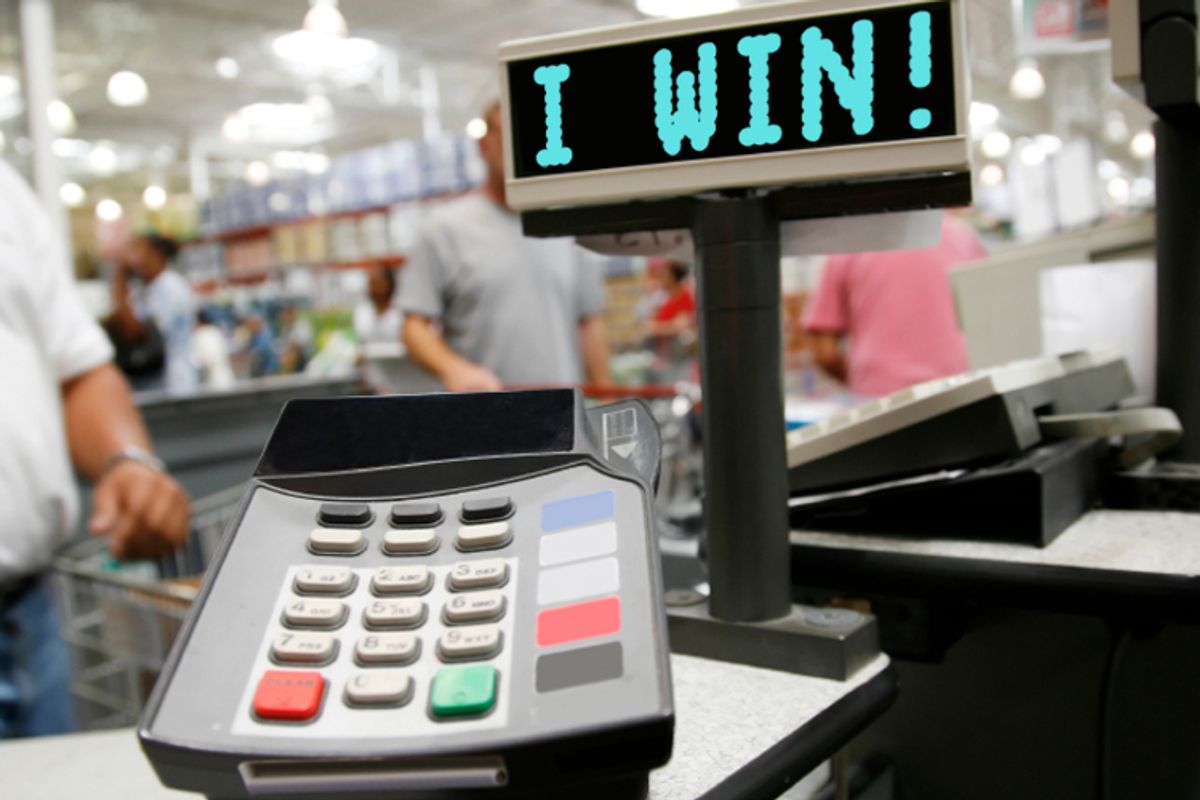 But some of my coping mechanisms manifest themselves in funny little ways. One game, in particular, is extremely special. It's also brazenly immature.

I positively, absolutely, never ever use the one singular device that defines us as a higher species. That all-important plastic strip that maintains order in the chaos of the grocery story checkout line. To the best of my knowledge, this instrument has no official name. To me it's always been known as "the bar." It's quite an ingenious little widget, actually: A portable barricade that keeps your own food purchases snugly isolated from everyone else's, a thin black line between your ice cream and another man's Depends.

Well, I say screw the bar.

As far as I'm concerned, the grocery checkout line is my stage. The beauty of my craft is that it works on everyone, from the retired to the college kids and those in between. And after months of practice, my brand of bar terrorism is down to a precise science. Let me tell you my carefully rehearsed routine.

First, after acquiring all of the items on my shopping list, I search for a checkout line where a customer is just about finished unloading his groceries. I start emptying my shopping cart and place all of my items, very slowly, on the conveyor belt.

I never make eye contact with the shopper in front of me. This is very important. I see myself as a trained prizefighter psyching out his opponent before the bell goes off in the ring, my gaze fixed solidly on my own groceries. Months of training have prepared me for this moment. I can feel the person's eyes darting about. Then, with all of the majesty of a glacier drifting inevitably toward the open sea, my box of Cap'n Crunch slides ever closer to his all-grain whole-wheat pasta container.

That's when it arrives: The first mild glance of annoyance.

Now, my mission is dependent on an unwitting accomplice in my drama -- the cashier. Lucky for me, he or she has no interest in any sort of orderly procession and is all too willing to keep the purchases zipping by. After careful scrutiny, I've come to the conclusion that all cashiers undergo a rigorous training program to help keep their foot on the conveyor belt accelerator at all times. They have honed an utter disregard for the laws of physics.

By now four or five of my items have merged, and the rube in front of me is beginning to cast about nervously for his plastic barrier. I brace myself for what comes next. I call it The Push.

Because I have the temerity to violate someone's personal shopping space, the rules of engagement have changed. Dad loses any inhibition he might have had about invading my space. With a jab that would do the great Sugar Ray Robinson proud, he shoves my grocery items back and turns to either his shocked shopping partner or the cashier for some kind of validation. Theirs is a look that says: "Didn't anyone teach that rude unshaved bald man any basic shopping etiquette?"

The violated shopper physically transforms and inflates in stature. He's fought the good fight and has triumphed. Dignity, order and plastic boundaries are still the law of the land.

But little does he know this is just a prelude. That I've been controlling this little dance like a seasoned Geppetto.

Now I take my game to the next level. I upload my groceries onto the belt at triple the normal speed.

And then the sublime happens. The big payoff.

Out of options and out of patience, the irritated patron turns around to face me and slams the bar directly in front of my procession of groceries. The violence of the act even breaks the living undead stare of the cashier and reality is placed momentarily on pause.

Only then do I awaken from my shopping cart coma and look up. Standing there in absolute silence I experience a rebirth. It's as if the gift of sight and sound has suddenly been bestowed upon me. The utter indignation, the anger, the confusion, the desire for some sort of physical confrontation, all of this and more swirls about me. I soak it in and gain strength from the bar tantrum.

The real skill is to convey a look that tells the bar slammer that he has done me a favor. In that moment I force myself to think, "Thank God my groceries are not going to be mixed up."

After the line of plastic has been drawn in the belt, I stare directly at my accuser, and visualize that I've just finished the most satisfying dump of my life. And then when that image is locked in my eyes I mouth a silent, "Thank you."

After this transformation, I reload my groceries, now safely behind the bar, one item at a time.

The joy, the heavenly pleasure, that for just this one instance in my life I can control someone else's behavior is blissful. I have discovered the power to make people use the bar almost at will. I can count on my one hand, without using my thumb, the amount of times people have not used the bar when faced with a tsunami of my food inching toward theirs.

I don't question why this pathetic act authenticates my existence. It just does. I walk out of that grocery store, not as someone who has been pronounced redundant, but as a man among men with his dignity and power intact.

And the real beauty of this subversive act? It works both ways. The aggrieved person strides out of that store like he's stopped the invading Huns. That night around the dinner table his act of bravery will be celebrated with his family and friends. While for me, I can go home and face yet another Disney onslaught and take pride in that pickerel that I am going to serve my girls that night.