The politics of sore loserdom

Artur Davis's once-promising career was derailed in June. What he's done since then is just pathetic 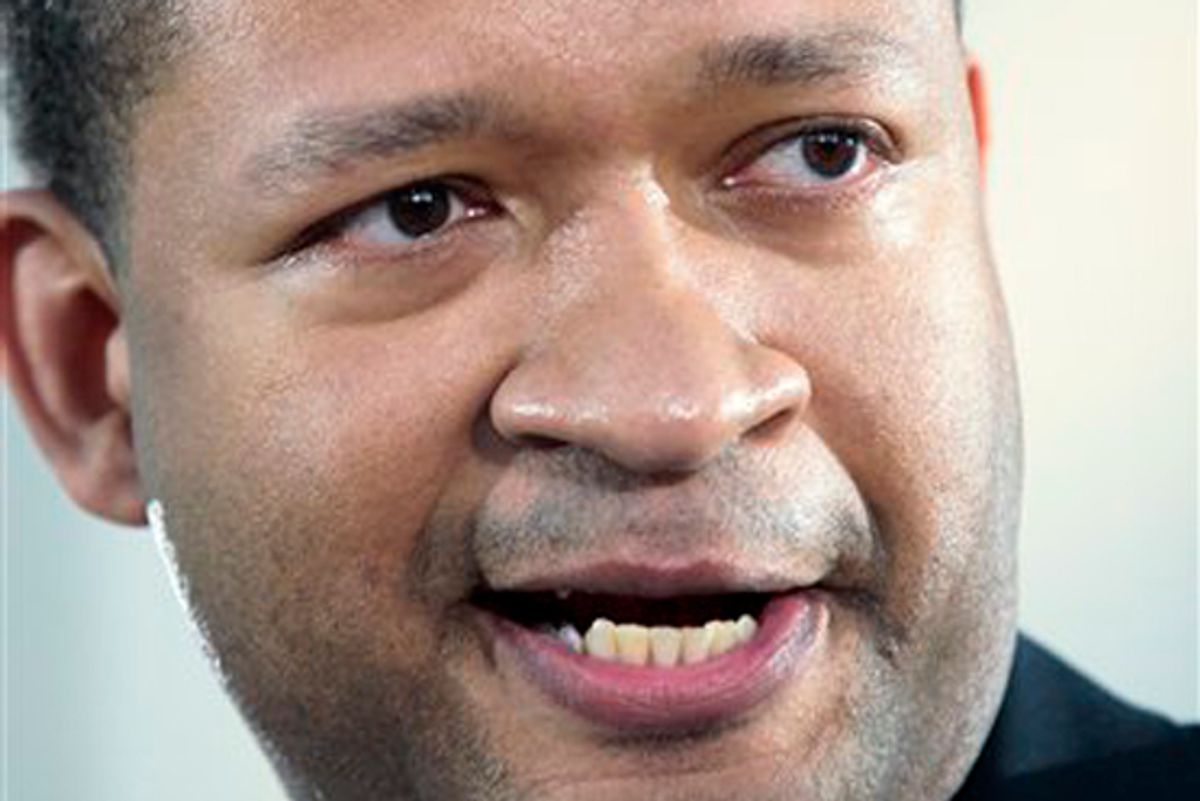 FILE - In a Friday, Feb. 6, 2009 photo, Rep. Artur Davis, D-Ala., announces his candidacy for governor during a press conference in front of the Archives and History Building in Montgomery, Ala.(AP Photo/Dave Martin, File) (Dave Martin)
--

In an extraordinary display of gracelessness, Artur Davis, the Alabama congressman who was badly defeated in his party's gubernatorial primary in June, has penned an Op-Ed attacking the man who beat him, Ron Sparks.

The piece, which ran in Monday's Montgomery Advertiser, is framed as a principled critique of Sparks, the state's agriculture commissioner. But Davis’ words drip with disdain and lingering bitterness, providing a pathetic and potentially final note to a political career that was once noted for its fast ascendance and seemingly limitless potential.

In withholding his support for Sparks, of course, Davis is essentially endorsing the Republican nominee, Robert Bentley. But in the Op-Ed, Davis attacks Sparks for his opposition to charter schools, while ignoring Bentley’s similar stance. He also comically concedes that there's "no evidence that Sparks is corrupt" -- but then questions Sparks’ integrity. And he whines about "smears" supposedly perpetrated by Sparks' camp in the primary, while leaving out any mention of the highly negative campaign that Davis himself waged to win his House seat back in 2002.

The entire piece reeks not of principle but of score settling. In fact, Davis has been sniping at Sparks since June, displaying unusually poor post-primary behavior. And his attitude is all the more galling when you consider how long ago the primary was and just how badly Davis was beaten, a showing more indicative of his own flaws than any other factor.

When he was elected to the House in '02, some heralded him as an up-and-comer who might someday be the country's first black president. Barack Obama ended up getting there first, but winning the governorship of Alabama, an office once held by arch-segregationist George Wallace, would still have been a remarkable feat. When the 42-year-old Davis began his campaign, he was seen as a shoo-in for the Democratic nomination, making the final outcome that much more startling.

The roots of Davis’ 24-point drubbing came from his aloof campaign style and personal manner, his vote against healthcare reform in the House, and his disconnect from black voters. In trying to present himself as a staunch centrist -- a general election requirement for any black candidate pursuing statewide office, particularly in the Deep South -- Davis prompted many black voters to conclude that he was taking their support for granted.

His loss of the state's Black Belt counties was a stunning rebuke -- and it had virtually nothing to do with Sparks' negativity. A bigger factor was that Davis largely eschewed the roll-up-your-sleeves, stand-on-the-back-of-a-rusty-pickup politicking that is still imperative for Southern candidates. Sparks, meanwhile, conducted a more robust campaign and enthusiastically appeared in many of the black churches Davis ignored. If Davis wants to know why he lost, he need only look in the mirror.

Granted, his disappointment is understandable. This surely isn't how the Harvard-educated former federal prosecutor imagined his political career ending (if this is, in fact, the end). His defeat provides more evidence of just how difficult it is for black politicians to become senators or governors -- especially those who come from gerrymandered, majority-minority districts that tend to be overwhelmingly liberal. Catering to the sensibilities of such a district can push a representative far from the political middle that's so important in statewide campaigns.

Throughout his career, Davis recognized this tension and worked hard to craft a moderate image that would help him in a statewide race -- or so he thought. Losing in a primary after spending years preparing for the race is surely a bitter pill to swallow. It's as if Davis feels he did everything right and still lost, so he must have been tripped up by outside forces.

But the fact remains that he ignored his base. His vote against healthcare this year is a perfect case in point. No House Democrat who opposed the final bill came from a more Democratic-leaning district. Davis’ constituents supported the legislation and followed the debate closely. His vote, while problematic to a more skeptical, conservative, statewide audience, was completely unacceptable in the Black Belt and was a grave miscalculation. Sadly, Davis’ misdirected anger well reflects the sense of entitlement not uncommon to incumbents everywhere, many of whom routinely neglect their bases.

Davis should be commended for having the guts to give up his safe House seat and run for statewide office in what is a brutal political climate for his party, particularly in the South. Most of his colleagues are far too cautious to take such a risk. And he should be praised for pursuing a career in public service in a deeply impoverished state, when he could have easily used his sterling academic pedigree to pursue more lucrative opportunities elsewhere.

But whether he's truly as serious about serving his state as he claims to be in his Op-Ed we'll soon find out. Now that he's leaving the House, will he grab a lucrative corporate job like so many other defeated pols? Or will he stay home and help Alabama? If he takes the latter approach, it just might undo the damage he's done to his image with his juvenile act these past two months.