Are liberals hypocrites for defending the "ground zero mosque," while bashing Dr. Laura for her racial rant? Nope 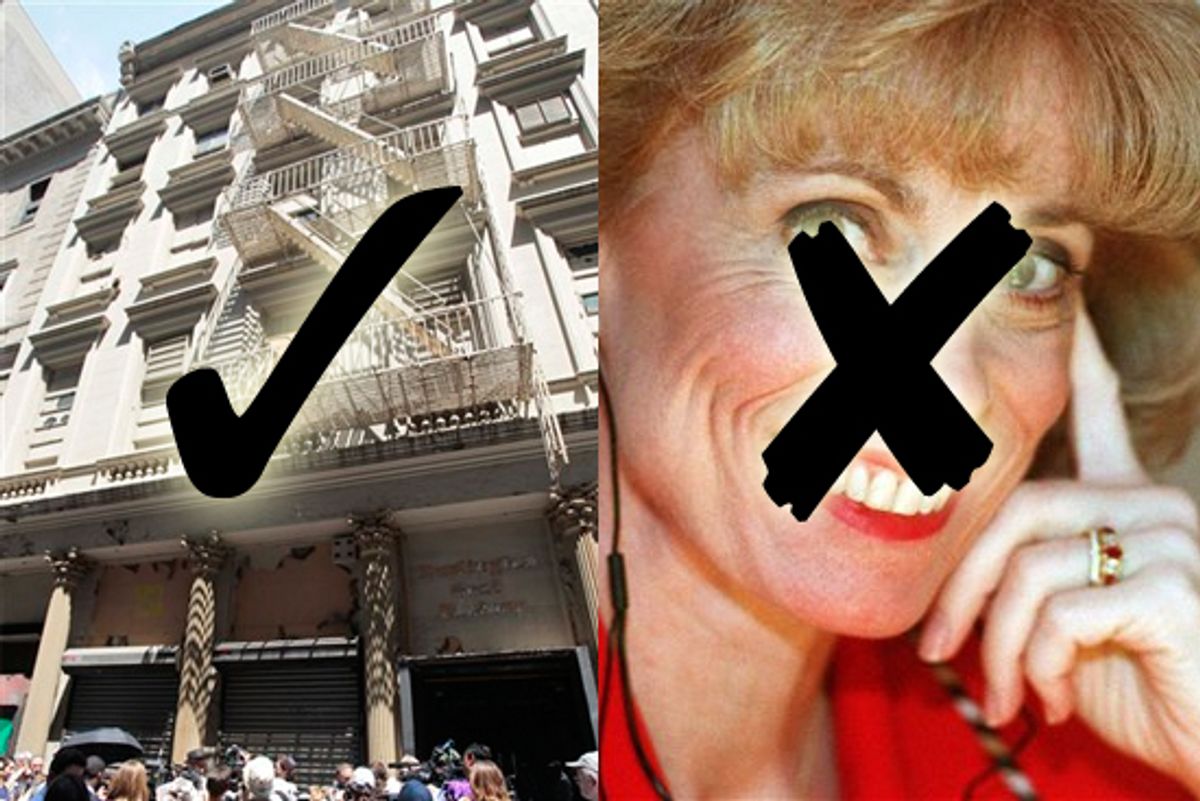 The site of a proposed mosque on Park Place in lower Manhattan, and at right, Dr. Laura Schlessinger
--

Several letters replying to my "Why Dr. Laura can't say whatever she wants" post made a similar and interesting point. To quote letter-writer Omni32:

White Americans have the legal right to say the word nigger, although they really shouldn't because some white Americans are racist.

Muslim Americans have the legal right to build a mosque in America but they really shouldn't because some Muslims are terrorists.

If Dr. Laura can't say whatever she wants then Muslims can't worship wherever they want. How are these different?

Interesting argument, right? So how can one condemn Dr. Laura and then argue for the protection of Park51?   Easy.

Park51 opponents claim that it's just not right to build an Islamic community center so close to the place where almost 3,000 people died due to Islamic terrorism. This implies some sort of connection between the al-Qaida terrorists behind 9/11, and the folks who want to build Park51. It's the equivalent of not allowing a Catholic church to be built near a boy’s school because of the priest pedophilia scandal. It's a principle in our society that you don't punish everyone for the sins of a small minority.

The defenders of Dr. Laura are claiming that it’s her right to use racially inflammatory words and make completely inappropriate and stereotypical statements about blacks on the radio. This implies that blacks should shut up and go along with someone ignoring hundreds of years of oppression, racism and overall shitty treatment because she has the First Amendment right to abuse us on the airwaves. No one argues with Dr. Laura's "right" to use racially offensive words and images. It's just that people who find them offensive have the right to say that and explain why. That's what happened in the case of Dr. Laura.

The common thread between condemning Dr. Laura and defending Park51 is the idea that the persecuted should be protected. That’s why most liberals are adamant about both cases. In this country the actions of a few have caused many to demonize an entire group. The word "Muslim" has now become code for evil. One of the constant jabs at President Obama is that he might be a "Muslim." They say, "How could they possibly build near where so many Americans died?" all while ignoring that of those Americans many Muslims died as well. Demanding that the Park51 move due to its religious affiliation stirs up, in many of us, the need to defend the wrongfully persecuted.

Now when Dr. Laura started saying (not using) the word "nigger" in an amazingly insensitive manner, then offering up racist stereotypes about black comedians and black voters, asking why blacks still complain about fairness now that there's a black president, and suggesting her caller should not have married outside her race if she couldn't take her new white family's insensitive treatment, alarm bells went off once again. Even those who were not directly attacked by her statements saw they were wrong and set out to explain why; again, to defend the persecuted.

Polls are finding that upward of 60 percent of Americans oppose Park51, but these opponents aren't being persecuted by the decision to build the Muslim center. They are reacting wrongly due to fear, and for some, hatred. A fear and hatred that in all honesty has been stoked by the GOP and the Tea Party for political gain. Lucky for us there are still many patriots out there who say, "No, you can't curtail religious freedoms just because you feel uncomfortable with a particular religion."

To summarize: People who object to Dr. Laura's spewing racially inflammatory garbage have a legitimate grievance; people who object to Muslims building a community center near ground zero do not. They have a grievance with al-Qaida, as we all do. If al-Qaida was trying to build a mosque there, I'm sure liberals and conservatives would join in protest.

So when you wonder, "How can you condemn Dr. Laura and defend Park51," the answer is really simple. It's the right thing to do.