Slide show: The globe's wild recent weather. Plus: An expert on whether it's global warming's wrath 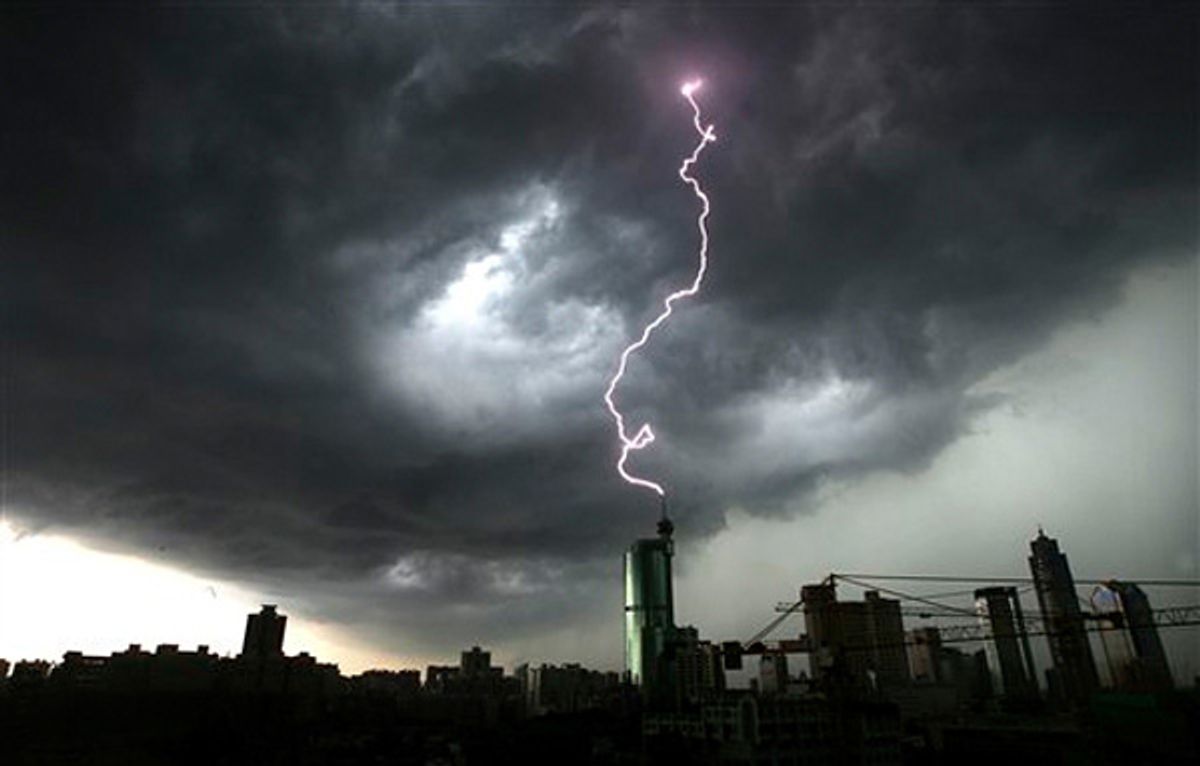 Lightning strikes the top of a building in Foshan in south China's Guangdong province in June. Torrential rains brought down a dike in southern China, forcing 68,000 people to flee their homes.
--

Skin-crisping heat waves. Massive floods. Runaway glaciers. It feels like everywhere you turn this summer, there are stories and images of dangerous and extreme weather. Just since the beginning of July, Russia has posted its highest recorded temperature ever, 2 million Pakistanis have lost homes to flooding, mudslides have killed more than 1000 Chinese, and one day in rural South Dakota, apocalyptic 2-pound hailstones rained from the sky.

We've assembled a slide show of some of the most extraordinary photos of floods, fires and other weather disturbances. We also spoke with Heidi Cullen, scientist and author of the newly released book, "The Weather of the Future: Heat Waves, Extreme Storms, and Other Scenes from a Climate-Changed Planet" to find out what they mean.

We’ve obviously had a couple crazy months of weather globally. But are all those events just normal weather variations, or does this signal something broader about the health of the planet?

With these kind of extreme weather events, we can certainly say that it’s completely consistent with what we expect to happen due to global warming. But it’s hard to unravel it and say exactly what amount of the weather is caused by climate change and what amount is driven by other things.

There’s been bizarre weather all over the world, but it’s been really varied--an especially cold winter in South America, extreme heat in Russia, floods in Asia. How, if at all, are these disparate weather events linked?

Right now we look at the weather and we say, this is consistent with what we expect given the patterns of global warming. But it takes time for climate scientists to really do a weather autopsy, so to speak. That means running climate models that show how the weather would have likely looked with no human influence--no elevated CO2 levels or things of that nature--and then models that have us in the mix. When they did this for the 2003 heat wave in Europe [which killed 50,000 people], they found that humans doubled the chance of that event happening. So what I suspect will happen is that we will figure out that human driven climate change stacked the deck for this extreme weather that we’re seeing this summer.

What have you been able to figure out so far?

Well, we’ve already found several factors that are contributing to this summer’s extreme weather, some natural and some related to global warming. The first thing is that there is a huge ridge of high pressure parked over Russia, which is consistent with a major heat wave. And when there’s a ridge like that, you’ve also got a trough somewhere, and right now that somewhere is Pakistan, where all of that intense flooding is taking place. Added to that is a La Niña happening right now, which is typically associated with a stronger monsoon season. So just right there you’ve got the crime--bad weather--and a couple of accomplices.

But global warming has been raised as a concern as well. The surface temperatures in the Indian Ocean right now are about 1 ½ to 2 degrees above normal, which is very, very warm. That water has got storms going across it, and they can pick up additional moisture from the warmer ocean because more water is evaporating into the air. So that causes bigger storms.

Yes, it does, and I think from a risk communications standpoint it’s been valuable to see the way extreme weather has impacted places like New York or D.C. or Russia and made them feel vulnerable, because it makes clear that any community can be impacted by extreme weather. Russian president Medvedev, who is a staunch skeptic of climate change, went on record recently saying that the climate issues that his country is facing right now should be a wake up call. So I think the vulnerability is extending to places where we don’t normally find it, and that can be important for making people act.