Why Rick Lazio wants to debate mosques, not money

For the New York GOP candidate, no topic is as sensitive as his dubious career in bank lobbying and deal making 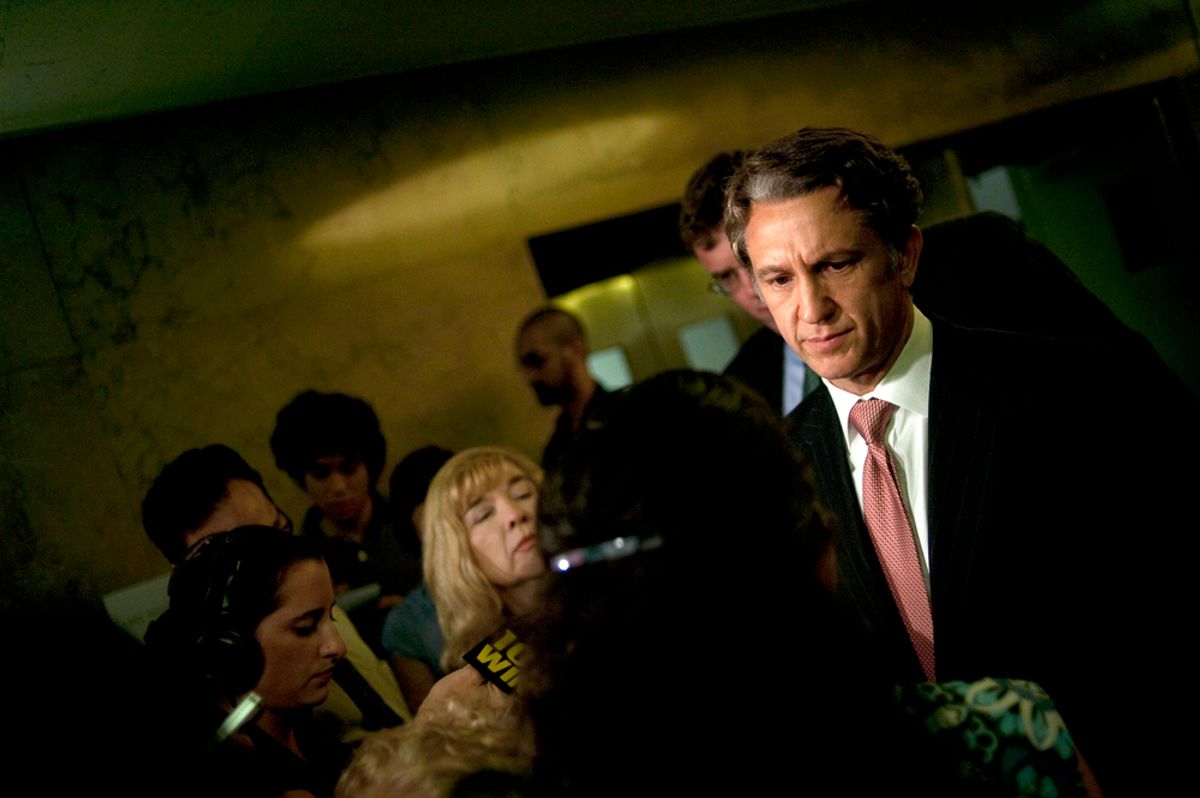 Rick Lazio, the Republican nominee for governor of New York, speaks to members of the media during a Landmarks Commission's hearing on the proposed Cordoba Mosque to be built near the site of the former World Trade Center in New York, July 13, 2010. REUTERS/Keith Bedford (UNITED STATES - Tags: POLITICS SOCIETY) (Â© Keith Bedford / Reuters)
--

No Republican politician has sought to inflame concerns about a Muslim community center in lower Manhattan so long, so loudly and so persistently as New York gubernatorial candidate Rick Lazio. Best known until now for losing the 2000 Senate race to Hillary Clinton despite spending $45 million, Lazio has talked about almost nothing but the so-called "ground zero mosque" for the past month.

During the past few weeks he has demanded a probe of the Park51 project’s finances by Andrew Cuomo, the New York attorney general and Democratic gubernatorial candidate, and he then challenged Cuomo to a debate focused solely on the mosque. Admirably, Cuomo has brushed aside such crap by observing that the Constitution guarantees all Americans freedom of religion and that the government cannot forbid the construction of a church, temple or mosque by American citizens on private property.

Recent polls strongly suggest that Lazio's hysterics haven’t done much to salvage his sinking candidacy; if anything, he seems to be losing ground in the Republican primary to a Tea Party challenger whose rhetoric is even more extreme. But Lazio is doubling down on demagoguery, with an awful television ad reviving the pain and fear of 9/11.  Leaders of the city's uniformed services, who have publicly opposed the Park51 project as "offensive," immediately denounced the ad as "insensitive," "disappointing" and "unconscionable."

Yet while Lazio clearly hopes to exploit emotions ranging from anger to bigotry, he also needs to distract attention from another highly sensitive topic: his own career.

Following his humiliating defeat by Clinton, the former Long Island congressman became a very well compensated lobbyist for the financial services industry before joining JP Morgan Chase as a lobbyist and then a banker -- not necessarily the most popular professions for someone hoping to return to public service. He got those jobs owing to his political connections, and then used those same connections to bring hundreds of millions of dollars in government-connected investments to the bank.

Or at least that is what he tried to do, as Village Voice reporter Wayne Barrett reveals in a blistering examination of Lazio’s attempt to obtain a huge money management deal from the Pension Benefit Guaranty Corp. in 2008, when the federal agency was still controlled by the Bush administration. More specifically, Lazio was seeking to convince Charles Millard, then director of the PBGC, to channel a fat chunk of the agency’s assets from secure, conservative investments into far riskier subprime instruments, mostly in real estate.

Millard’s dubious conduct as the head of PBCG is not a new story; his tenure was the subject of a Senate investigation that included a public hearing where he repeatedly invoked the Fifth Amendment (which so far nobody in the GOP is proposing to repeal). But Barrett has obtained a series of "chummy e-mails" between him and Lazio that put them both at the center of the PBGC scandal:

Within hours of George W. Bush's May 3, 2007, announcement that he was naming Charles Millard head of the $64 billion Pension Benefit Guaranty Corporation (PBGC), Rick Lazio got an e-mail about it from a fellow JPMorgan Chase executive.

"I do know him well," Lazio replied.

Lazio would boast in subsequent internal Morgan e-mails obtained by the Voice that he was "very friendly with the head of PBGC."

How friendly? Lazio and Millard would soon start down the path of a near-billion-dollar deal that eventually ensnarled both in multiple federal probes that looked into their apparent efforts to game a government bidding process, as well as subsequent attempts by Lazio to get Millard a job.

These details of Lazio's exercise in insider influence are emerging just as his gubernatorial campaign boasts that he's the man who should be elected to clean up Albany. The key facts about his conduct crawl from his own computer in an e-mail trail that reaches as high as America's number one banker, Morgan CEO Jamie Dimon, who was drawn in as Lazio pushed to win Morgan a lucrative contract that would put retiree benefits into risky investments.

No one will be prosecuted for this chummy dealing, because neither the quid (the allocation of the $900 million Millard awarded Lazio's firm) nor the quo (Lazio's efforts to get Millard a job) came to fruition, nipped in the bud by investigations that began almost as soon as the deal began to come together, leaving prosecutors with nothing more than compelling proof of intent. But a botched scam can be a blessing in disguise, as the electronic fingerprints of these two clumsy conspirators prove beyond a click of a doubt….

All of the participants in this scheme, including Lazio and Millard, were grilled in a Justice Department investigation after PBGC Inspector General Rebecca Batts referred the case to prosecutors. Having jeopardized the pensions of more than 40 million Americans in order to enrich themselves, despite ample warnings that their plan could be disastrous, the plotters escaped. The investigation ended last March without any indictments.

According to Barrett, two officials involved in the probes acknowledged that "the primary reason why no charges were filed was because the companies, including Morgan, never got PBGC's assets, and the job-hunting efforts were derailed, ostensibly by the investigations."

As that probe concluded, the Lazio campaign was just getting underway. Neither his role in the PBGC scandal nor his career as a lobbyist qualifies him to "clean up" the Empire State. He's smart enough to know that -- which must be why he prefers to yammer on incessantly about Muslims, mosques and 9/11.