The female victims of Pakistan's flood

Women face starvation, disease and sexual assault. They're also not supposed to get aid from male relief workers 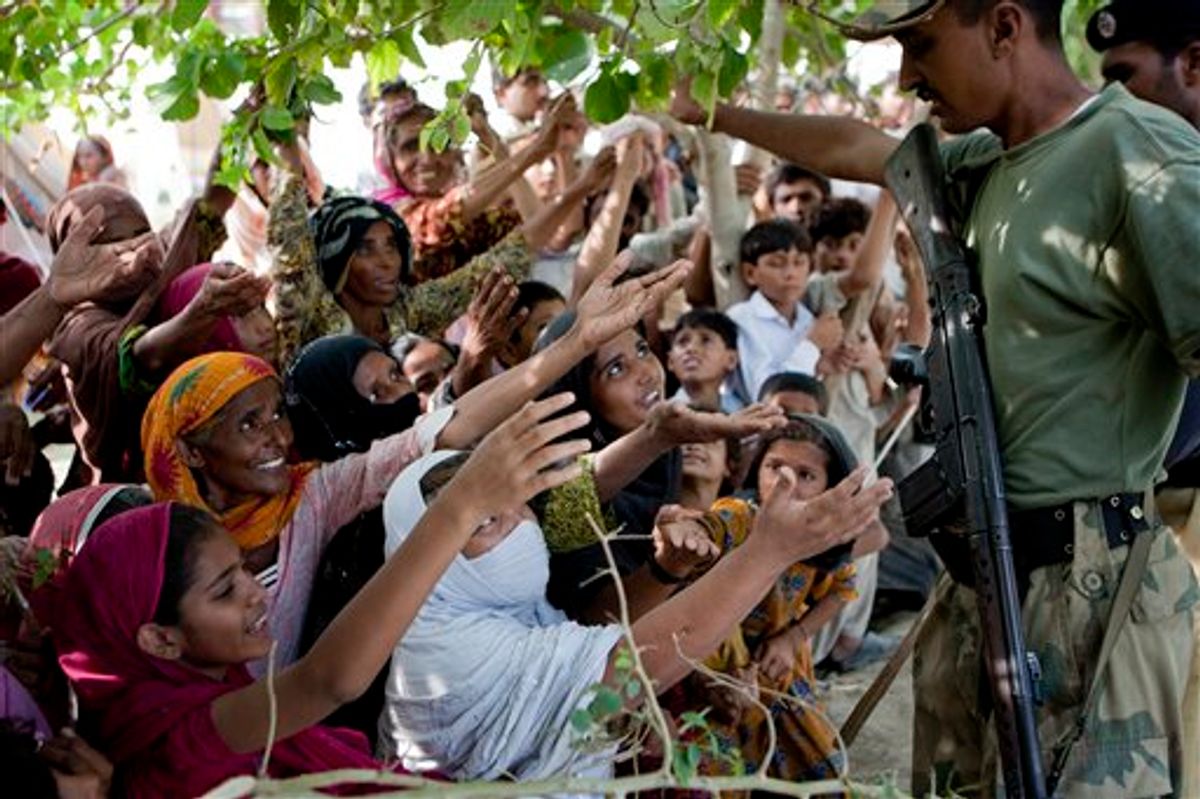 Pakistani flood survivors demand help from a soldier in Jampur near Dera Ghazi Khan in Pakistan on Thursday, Aug. 19, 2010. Islamist terrorists may exploit the chaos and misery caused by the floods in Pakistan to gain new recruits, the country's president said Thursday. Asif Ali Zardari's remarks were echoed by U.S. Sen. John Kerry, who toured some of the worst hit areas and visited a relief camp alongside the president. (AP Photo/B.K.Bangash) (AP)
--

Just when you thought the "ground zero mosque" was our most pressing concern, the floodwaters of Pakistan arrived to create "probably the biggest emergency on the planet today,'' as UNICEF puts it. It is a disaster that contains the germ of many others: starvation, epidemics, climate change, political instability and future violence. Heavy rainfalls have placed some 20 percent of Pakistani territory underwater, an area greater than Italy, killing more than 2,000 persons and displacing and destroying the livelihoods of around 20 million more. Six million require immediate assistance. As always in disasters of this kind, it is women and the children they care for who tend to suffer the most -- both in the immediate disaster and in the long, uncertain aftermath. This suffering manifests itself in ways that raw statistics cannot measure.

According to the RHRC (Reproductive Health Response in Crises Consortium), 85 percent of persons displaced by the flood are women and children. As the floodwaters rise, they are at acute risk from starvation, exposure, sexual assault and water-borne diseases. However, providing them with assistance is more difficult than these basic facts suggest. In traditional Pakistani society, it is taboo for women to receive aid or medical care from male relief workers, preventing many of them from seeking such aid in the first place.

This particularly applies to pregnant women surprised by the flood. Pakistan already had a high maternal morality rate before the flood, with 320 women dying per 100,000 live births. This rate has undoubtedly increased due to the disaster. While the Pakistani government and NGOs have sent female aid workers into the affected areas, their numbers are not always sufficient to meet the crushing demand for help. In addition, women are increasingly cut off from a supply of birth control pills and condoms (before the flood, 30 percent of fertile women were using some form of contraception). A wave of unwanted pregnancies, with all the complications that will bring, is certain.

An OCHA report from Aug. 16 states that "the large numbers of children and pregnant and lactating women without access to food and the rising trend of diarrhea point towards a clear risk of malnutrition among the affected population." But even where food aid is available, fair distribution to those who need it most is almost impossible to ensure. As 12-year-old Shahid Muhammed told IRIN News, "When food is distributed the strongest young men grab it for their own families and push us children aside."

The dislocation caused by the flood could be particularly upsetting for women in Pakistan’s traditionally conservative rural areas. Shmyalla Jawad, the gender advisor for Plan Pakistan, described what she saw to the BBC:

What emerged for me to be the most worrying thing was how women and young girls are being affected by this. Health and sanitation is a big issue. One camp set up in a government building had no bathing facility. Whereas the men and young children can take baths outside on the school lawn, women don't have that option. Many people didn't have a chance to pick up their belongings when the floods hit their village so they have no change of clothes. Many are wearing what they left home in and without being able to wash and women's hygiene in particular has deteriorated. The situation is even worse for menstruating and pregnant women.

The camps are also culturally shocking for women and girls. Many have never been around a man who isn't a member of their family. Now they are amongst hundreds of men who are complete strangers. In some sectors of Pakistan society, apart from the religious notions of covering up and not mingling with males outside one's family, women are considered to be the custodians of male and family honor. This notion of honor is linked with women's sexual behavior so their sexuality is considered to be a potential threat to the honor of family. Therefore, the systems of sex segregation known as purdah are used by the society to protect the honor of the family. But in the camps there are no provisions for purdah. Young boys and girls have to sleep in the same room, at times next to each other, most mothers and families do not feel it's safe for their daughters, especially in the current circumstances.

Now it could be that the disaster and the world's response will "shock" Muslim women into adopting a more "modern" and "Western" outlook on life (as Naomi Klein might put it). But this is surely an untested and utterly heartless notion. The opposite result is just as likely. In any case, as government and Western aid takes its time in arriving, Islamist groups more in tune with local proprieties have been filling the gap, clearly jockeying for a more visible role in the reconstruction. British-Pakistani journalist Ahmed Rashid believes that the destruction of crops and infrastructure will lead to food riots. He believes that "joblessness and helplessness will lead to more young men joining the militants, who are propagating the idea that the floods are God's wrath against the government ... All of this will dramatically loosen the state's control over outlying areas, in particular those bordering Afghanistan, which could be captured quickly by local Taliban," leaving Pakistan as "a failed state with nuclear weapons."

Where do Pakistani women fit into this view of the future? Let's look at their past first. While they are better off than many in the Muslim world and have benefited from progressive gender policies over recent decades, they still have at best a 36 percent literacy rate. The International Labor Force Survey of 1991-92 reported that only about 16 percent of women age 10 form part of the official workforce, a figure that may have doubled since then. In rural areas, it is estimated that around 80 percent of women are engaged in farming. Twenty-four percent of the population lives below the poverty level, including the majority of families headed by women.

More rain may be on the way. But when the floodwaters recede, what is next for already unstable, nuclear-armed Pakistan? It is hard to identify any silver lining in the storm clouds darkening the Hindu Kush. Peter Walker, head of the Feinstein International Centre at Tufts University and founder of the World Disasters Report, says:

The immediate flooding has wiped out the asset base of millions of people, so they face a future where they have to refinance and build homes, clear debris-covered land (assuming it has not been washed away), restock shops and market stalls, re-equip small businesses, etc, etc. And all this in towns where the schools, clinics, courts, police stations all need rehabilitating. We know that Pakistan is likely to lose at least one year's good production, and may see food-production levels lowered for the next few years because of the combined effects of soil erosion, destroyed irrigation, and contaminated soil. Then we have the army as the only really effective state institution, and an insurgency, and foreign interest in Pakistan's politics. So, will the floods lead to a possible famine like situation next year? Will this be enough to topple the government, and will they be replaced by a military government? It is this complexity and propensity for one crisis to tip into another that makes Pakistan today one of the most devastating disasters.

So who will come out the winner in the coming power struggle? One thing is for certain already: It won't be Pakistani women.