Becoming independent in my 20s made me a stronger person. Why is this generation content to stay at home forever? 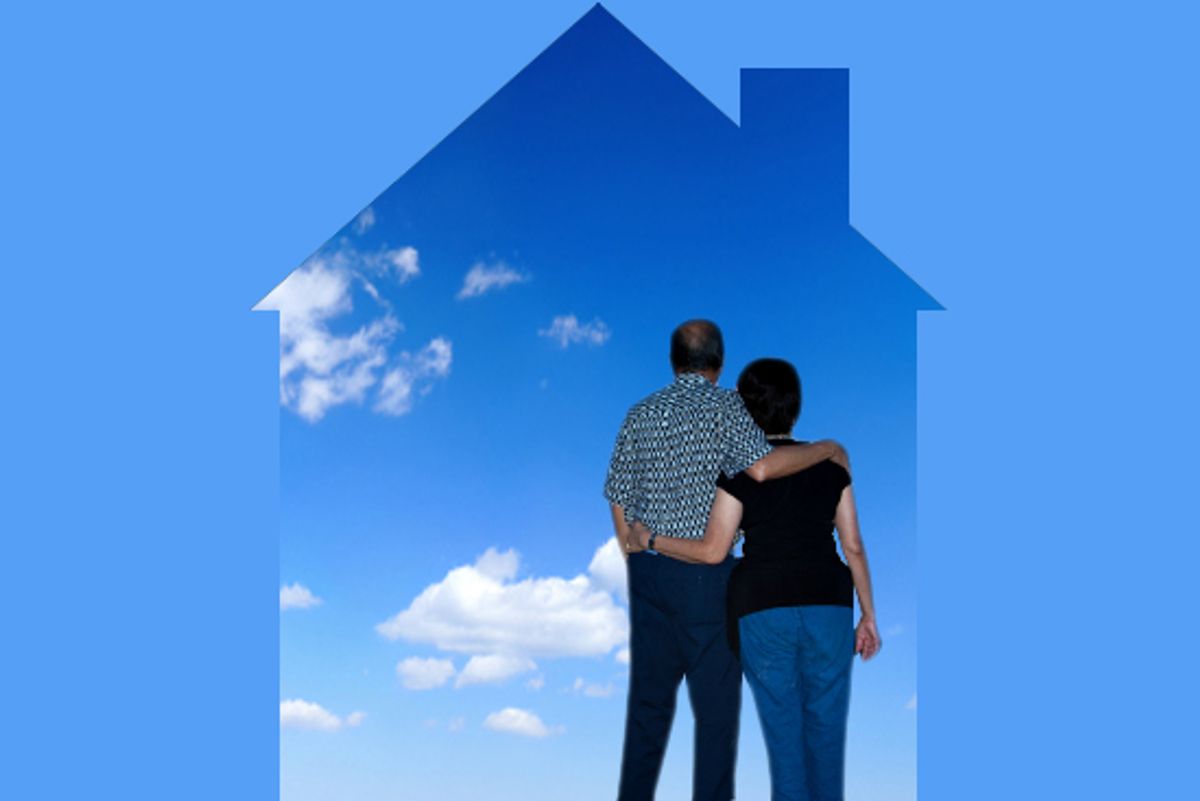 An article in this weekend's New York Times Magazine addresses a question much on the minds of the middle-aged these days: "What Is It About 20-Somethings?"

Drawing on the work of psychologists, sociologists and neuroscientists, writer Robin Marantz Henig explores possible reasons that 20-somethings no longer use that decade of life to move through what sociologists have long considered the five milestones that signify adulthood: the end of formal education, separation from the family, financial independence, marriage and parenthood. In 1960, 77 percent of women and 65 percent of men had passed all five milestones by the age of 30. By 2000, fewer than 50 percent of the women and 33 percent of the men had done so.

Delaying marriage and parenthood until one's 30s is generally seen as a good idea these days, but postponing financial independence is another matter. The phenomenon of 20-somethings living with their parents (partially or even fully supported by them) is so widespread that most people reading this have surely witnessed it, many within their own families. It's a frequent topic of puzzled discussion among people my age, who wonder why things have changed so much in a generation. While the baby boomers were seen by their own parents as cases of arrested development (still arguable given their penchant for behaving as if they don't want to grow up), they did leave home and start independent lives at the usual age, while their children seem to have embraced prolonged dependence with very few qualms.

Some people have theorized that what we are seeing is not a generational change or a response to economic conditions, but a developmental stage (Jeffrey Jensen Arnett's "emerging adulthood" being the preferred nomenclature) that people pass through in their 20s before reaching full adulthood. Proponents of the delayed-adulthood theory suggest that just as "adolescence" is now an unquestioned developmental stage despite being identified only a century ago, so this trend should be accepted as a new fact of life in a time when people live far longer than ever before.

But others argue that developmental stages must meet the criteria of being both universal and essential, something that everyone must move through in order to progress in life. Given that many people (especially in less developed parts of the world) skip the "emerging" and leap straight into "adulthood" with all its attendant responsibilities, how can this decade of delay be considered a given of human existence?

For those of us who did jump directly into adulthood after finishing our education, it is indeed a stretch to see the behavior as something other than a choice, albeit one undertaken with the cooperation (or even encouragement) of the parents involved. Despite complaints about their children's dependency, many parents relish the closeness they share with their (legally) adult children and may even be thrilled that their kids like them enough to want to keep living together.

And if you're a baby boomer, even a childless one like me, it's easy to understand those emotions. After all, we were the generation who couldn't wait to get away from home and who judged and even shunned our parents for what we perceived as their endless list of faults — political, social, cultural and moral. Most of us fled our families as quickly as we could and never looked back. "I would have done anything not to have to move back home" is a comment I've often heard people my age utter about our move into independent life in our early 20s.

And doing anything and everything was precisely what we did, even during the recession-riddled years of the '70s and '80s — which rivaled the current difficult economic times — when jobs were also scarce, especially for recent college grads, and inflation was soaring in ways that are hard to comprehend today (banks offering car loans at 22 percent, anyone?). The eyes of 20-somethings glaze over when we recount how we lived — sharing living quarters with a pile of friends, having only battered old belongings (and few of them to boot), eating cheap food we cooked ourselves, and spending little or nothing on entertainment.

At times, we can sound just like my parents did when they recounted what it was like to live during the Great Depression: "We made our own fun rather than going out." "I once lived on beans for a week!" "We had to save up a long time for anything we bought, and so it really meant a lot to us." I've told the story of figuring out that onion soup was the cheapest thing to eat (requiring only water, an onion and a bouillon cube) more often than my father ever talked about hopping freight trains with hobos in the 1930s, and I don't even have kids of my own to tell it to. Explaining that much of what 20-somethings consider necessities (personal computers, cellphones, DVRs, Frappuccinos) didn't even even exist then — and that we were just as happy without them — makes me feel as if I should be gumming my toast and whittling out on the porch.

And yet it's all true.

It's also true that our independence, expensive as it was — costing us servitude to often lousy and menial jobs, near-poverty living conditions and deferred gratification of our material wants — seemed a bargain well worth making at the time. Anything to be free of the parental yoke, we felt.

But that makes it sound like a choice. And the cold, hard truth is that, like many others of my generation (much less previous generations), I simply didn't have a choice about when to become an adult.

My parents informed all four of us while growing up that after high school graduation, we had only two choices: go to college (mostly but not entirely at their expense) or go to work and support ourselves. And after college, our choices were reduced to the latter. There were no do-overs, no grad school, no coming home and thinking about our life and how we'd like to spend it. Should we feel the need to live at home after our education ended, we had to get a job and pay the parents for rent and food. Only one of us took them up on that option for a while; the other three moved away immediately. All of us got low-level, low-paying jobs from which we worked our way up into professional careers. Two of us later put ourselves through grad school while working professional jobs, and a third did the same to finish out the undergraduate degree she'd had to put on hold after marrying, which my parents used as a reason to sever support.

At the time I went to grad school, many people expressed surprise that my parents weren't paying for at least part of it so I didn't have to work while attending school, but to me, that was simply a fact of life. Once we left home, we were required to be entirely financially independent — there was no subsidizing of our health insurance or our cars or any other life expense by our parents. If we couldn't afford something on the money we earned, we didn't have it. Which meant there was much we didn't have, until we slowly built careers that paid better salaries.

My parents, both of whom entered adulthood during the Depression and left home to make a living, thought that self-reliance and independence were virtues next to godliness. We were raised to be self-sufficient, and we are to a fault (just trying helping one of us, and you'll see). We also had the satisfaction of knowing that what we made of our lives as adults was truly of our own making. And having involved sacrifice, even small triumphs carried that much more weight.

But there was a predictable cost to pushing us out of the nest so thoroughly. We remained at a considerable emotional distance from our parents until they relaxed their own self-sufficiency and let us care for them at the very end of their lives. Even then, despite the comforting healing of many old hurts and divisions, we could never catch up on all the lost decades and become as close to them as I see my peers being with their own children, even at the ages (teens and 20s) when people most often resist parental involvement. Their intimacy seems almost alien in its contrast to what most of my generation experienced with our parents.

You can speculate about the reasons for this change: if the generation gap of political, social and cultural differences has truly narrowed to near invisibility; if parents today are more accepting of their children, as well as simply more openly loving and fun; or if my generation was aberrant in our estrangement and that the historically normal closeness of nuclear families has simply been restored. They're all equally valid theories. But perhaps the answer is something simpler and, well, closer to home.

My parents always made it clear that if we were ever in trouble, we should call on them and they would help. But that was the equation: We're here if you really need us. "Home is the place where ... they have to take you in," as the poem goes. But having to take you in and wanting to do so are two very different things. A safety net is not a welcome mat. As early as adolescence, many in my generation felt ill at ease in our own homes, hopelessly severed from any real connection with our parents, who had grown up in the first half of a century that had seen seismic changes in every realm of life. We couldn't go back to what we never had in the first place.

As another writer warned, "You can't go home again." But you can if there's a place where you truly feel at home. Most 20-somethings these days have that, and I think their parents have wanted to make sure they do, knowing what the lack of such sanctuary felt like to them at that age. While some parents obviously go too far in taking care of their should-be adult children, it's hard to argue against the value of a generation that feels close to their parents rather than being estranged as we were.

But I'm also grateful that my parents encouraged self-sufficiency. Being required to take care of myself completely starting at age 22 has given me strength because I've learned what I'm capable of even in extremely difficult circumstances, and satisfaction because I have known that whatever I achieved in my life was due to my own efforts. I continue to believe that independence and direction in life are choices, not behaviors held hostage to some developmental loitering that lasts long past the arrival of both physiological and legal adulthood.

So what is it about 20-somethings? My own answer is simple. They have what previous generations did not: a choice about when to become adults.