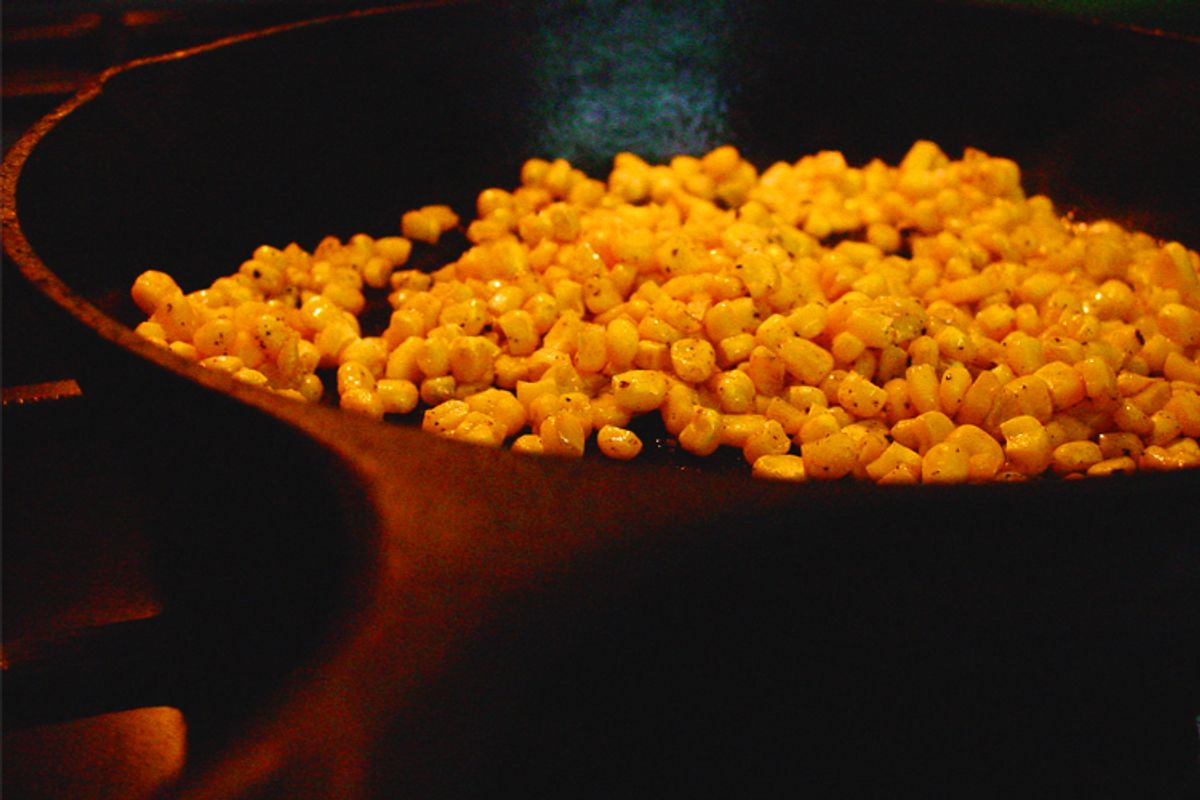 Right about now is when my cooking tends to get a little repetitive, to be honest. I love tomatoes and I love fresh corn, and for the brief time when the two are lying around in piles, I can't help but just deal with them constantly. So if you were coming to my house for dinner, you might, despite your good graces, find yourself saying, "Oh, great! Pan-roasted corn ... again..." And, well, I wouldn't blame you.

But most likely you haven't come to my house lately, so you're not sick of this stuff yet. And hey, it's good. Fresh sweet corn is wonderful just boiled, of course, but kernels cut from the cob, sautéed in infused fat until they caramelize, is on another order of pleasure. Their texture softens, but they keep their unique, bursting snap, and a few kernels shrivel to a satisfying chewiness. Their simple sugars darken and grow more complex, and corn's naturally sweet, nutty, buttery flavors form a lovely backdrop for unlimited flavor combinations.

See, one of corn's greatest charms is how well it plays with others. With those sugars, that vegetal freshness and a secret, subtle umami, it's like the little black dress of vegetables. (The little yellow sundress? You know what I mean.) Just off the top of my head, here are a few of my favorite corn friends: tomatoes (of course), garlic, butter, scallions, salami or other cured sausages, cured hams, Parmesan or any other hard cheese -- um, OK, soft cheeses too -- basil, thyme, mint, tarragon, olives, olive oil, chiles, coriander, cumin, black pepper and other warm spices, anchovies, fish sauce, soy sauce, ginger, pine nuts... OK, probably that's enough to make a point.

So that's it. Sorry, in my verbosity, I'm sure it reads a lot more complicated than it really is. But it's just a quick and infinitely variable way to feature the good cob. I often toss it with pasta, or use it as a bed to lay a grilled something or other on top, or, as in the recipe below, just use it to top a thick slice of toasted bread and call it a light supper.

Oh, and if you've never taken the kernels off a corncob before, it's simple. Some daredevils like to hold the ears up in their hands, but I lay them, shucked, on my cutting board. Using the length of the knife, slice off a "side" of the kernels. Now lay the cob on the flat side, and slice off another swath of kernels. Don't sweat it if you're not getting all the kernels off, especially since the ear tapers. Once you've gone all the way around the ear, pick it up in your hand like you're holding a baton and set the blade of your knife in the cob, as if you were going to chop it. Angle the blade slightly away from you and scrape all the way down the length of the cob; what comes out should be the rest of the kernels and what they call the corn "milk." That stuff is tasty.

Or, you can follow Salon's art genius DG Strong's illustrated method, which involves brilliance and bourbon. (Click on the picture in his post for an enlarged version.)

The other day, I was in an old-school, Brits-just-discovering-curry mood, and whipped up this little baby.

Serves 3 as a light entrée; 6 as an appetizer