I made myself into a father

Each year, I say I want only token gifts. It's part of becoming the dad I never had 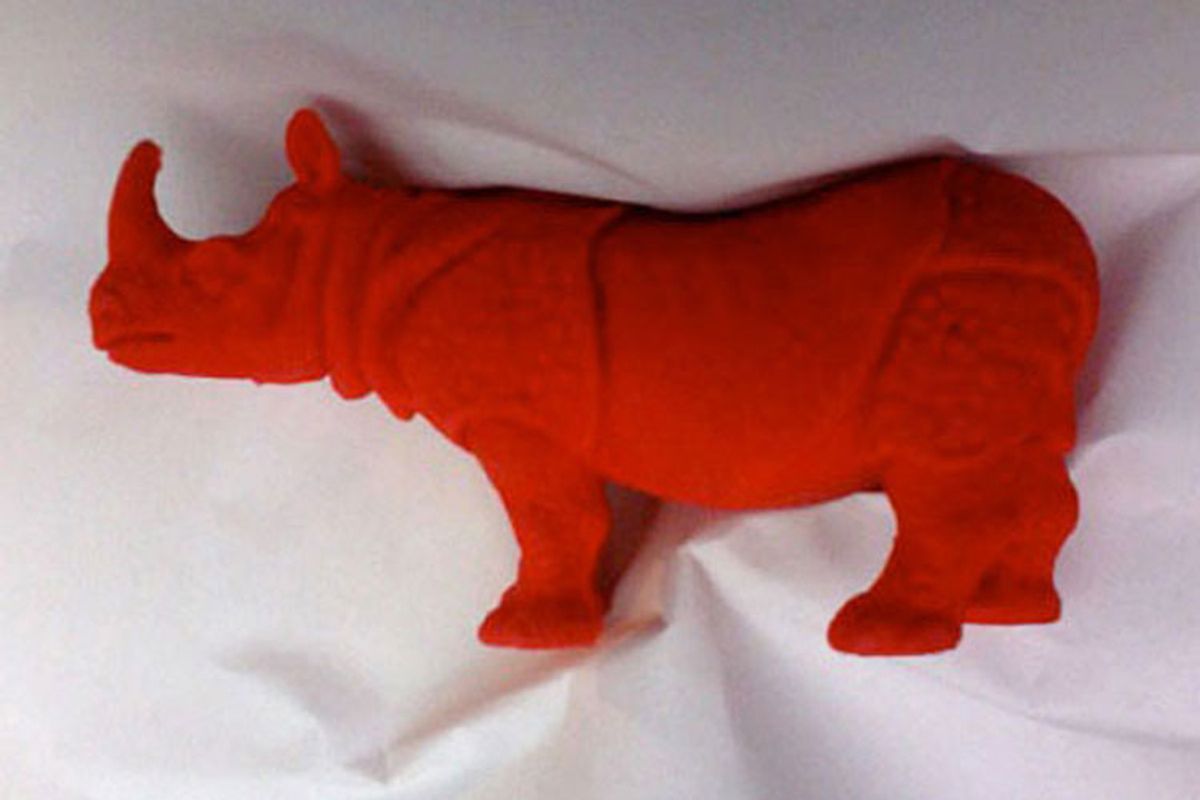 Every year I care less. I forgo gifts, and it just doesn't matter anymore. Yeah, I mean, but so what? What I really want is just too big, so for birthdays? Father's Day? I insist: little stuff. Save the money for college and maybe weddings and to pay down debt.

A few practical jokes from Manny's. A little Moleskine book. Just think of me. A-OK. Like this year? I got a $100 Apple gift card, so I could then have something to give to Roxanne two weeks later for high school graduation. I'm broke, see.

Months ago, like magic, some dollars came in, a few clients finally paid, and -- hey, presto! -- Rocky gets a laptop, a new pillow for her dorm, her textbooks.

Me, I subsume. I'm good at it. Hi there, fellow parents! I pretend there are greater gifts, and it works. This father I raised in me, the public me, believes it. Swallows rocks, years after year, and lo and behold: It's OK. No big deal. I get less to unwrap, nothing fancy, but I get to be a Good Man.

Somewhere in there, though, behind those rocks, is a little boy, with pale new down on brown freckled limbs, muscles smooth and wiry, bike chain grease on a taut inner calf, fresh from a fast ride away from a bad house, who still doesn't get it.

He's proud he knows six names for the color blue and can parse adverbs and participles. He mastered long division ahead of the class. He read Bradbury and Lovecraft and Harper Lee before anybody else, and got through two chapters of "I and Thou" just to prove he could. His soul is clean, and he turns his stingray bike so tight it leaves a black rubber curlicue on the macadam, a figure so small a Western box turtle can stand exactly inside, unafraid, his dry leathery tail ungrazed.

The boy cries and wants anyway. He wants the Spiderman action figure. He wants a banjo and a treehouse. He stamps and shakes his fist.

He rattles the rocks and moans, Mommy, please! because he wants to go see the elephant and ride the Tilt-A-Whirl in the Safeway parking lot; there's only one more night and then it's gone!

He wants to finish his degree.

He wants to go to Banff and ski the Bugaboos. He doesn't want to raise a little girl.

He wants that malt-colored cashmere sweater and that pale apricot silk shirt. He doesn't want to spend it all on apple juice and Cheerios and milk and pediatricians and bus passes.

He wants to be a paleontologist and brush plaster from Diplodocus bones.

He wants the entire Loeb Classical Library going back to 1913, oh yes, so bad -- all of Athenaeus' "Banqueteers," all of them, every volume, and he wants time to compare every good line, side-by-side, the English and the Attic Greek, just for the pure aesthetic bliss of it.

For that glow of new nerve fibers, racing from iliac bowl to amygdala, when ancient meaning lives again, New and Now. To make those long-dead dinner guests rise up and pour a libation, stir the embers, admire the host's tripod, and show off with a quote from a poet we no longer possess. Nothing but skinned Hypatia's burnt papyri, buried in the delta mud, but for Athenaeus' learned vanity, and feasts for barefoot scholars. The boy sees all this and says, where is MY feast? and would shout naked in the streets: Love this! Keep it alive! Or else be a brute, and lost!

He wants to translate the Odyssey, to try, to maybe get Arnold's good idea down and right, what Arnold himself couldn't do, to best Newman, Chapman, Pope and Cowper, to equal Fagles' panpipe music and wonder, to fulfill teetering Barnstone's impossible ideal: Truth, and grubby Nobility. And Poetry only where it's earned, those moments when Homer knew the dying torchlight gave him power, and he had the little ones snared.

He wants Italy for a month.

He wants Greece for a year.

He wants time alone, right under the timberline in the pines, and cut-throat trout, tenuous on a barbless hook.

That boy. I feel him. I don't listen though, hardly ever. How bad he wants it, to have gifts as in olden days, to get what he wants, finally, for once. Insatiable, selfish boy. He'll only want again next year.

He knows it's all a trick -- and he can't give up, either. I invented a father who made for me a man, and the father rewards the man with respect, admiration, credit for sacrifice. For surrender. For the opportunity I conjured up in mere decades -- is this right? is this how it goes? -- for three young women of promise.

How do I say this part? There is a sensation; what a man knows, what a woman knows, anyone who has borne it and bears it. Anyone who uncups hands and lets the little one blow out the candles.

It starts in a tight arch above the breath, above the nose, and we hold it, up there, so we won't break down. We swallow -- another rock, another one. It's wet, and it burns the bones in the front of the skull, as if you are grinding teeth; but they are apart, the tongue tight against pulled-in lips and ridged roof. It's pain; it's about-to-cry, majestic adult cry, and it never comes. It's familiar, it's every year, and for all these years.

They say, and you say: Look what I have, though.

But it is really what they have: the sure stride, the lark start, the learning, and the safety. The Happy, the Go, the Lucky.

The man did this. And O most exalted and everlasting, I do, I do so love those girls. The duck and grin and squabble and dare and levitation and new parts of new girls. The feverspeak -- breathed against the tender hairs that guard the inner ear -- of all their possibilities.

What I give up makes me good, eases all my cringe. And I thank them.

I will be good, today. I promise. And tomorrow I will not run away, jump on the boy's bike and peel out. I keep this promise. I am a father and a man.

I get back, what? the observation of them? Well. OK. They calm me. I no longer want to scream and demand; I get quieter every year. I listen, and I hold it in, and I wait until a better idea comes. The hungry boy, the selfish boy, still scrambles in here, his howls and pleas at a remove. He will always want his presents. From a mom and a dad, and to be remembered.

I know his too-big idea, his gift of gifts. Want to hear?

He wants a year, and then another, on and on, to write, alone; a cabin in Montana, yeah, up high, and all those Loebs, and cartons of paper and boxes of Pilot pens. He wants someone to come fetch it and bind it for the world, to read or no, and he also wants, perversely, for no one to ever think about him, to wonder about him, to enslave him with opinion and desire. He wants only to write and write, the boy to the man, the man to the father, the father to the boy. And he thinks it's coming.

I will never be cruel, never tell him: "Not likely, pal" or "You'll be too old if the chance finally comes" or "You won't have the money -- you gave it all away" or "You get sicker every year" or "What about them?"

It's all gone, me buck-o, for imaginary glory, the dignity of do-right.

So I say one more thing, the only thing that quiets us all, makes him sit with me for a moment. Me stiff, ratcheting down beside him, the boy crouching and attending. The man standing up, nearby, hands quiet.

I don't fuck up now.

This the boy gets. He missed a lot, back when. But even more he saw fuck-up. Saw what it does, how it doubles up fists, and drinks, and runs off when the boy got big.

But he knows this, this one thing. He knows:

If you fuck up, it's all ash. A beach becomes black soot. An action figure crumbles into friable, sulfurous ore. A book is just a grimy, smoked mirror. Time alone is simply time lost, sifting through burnt debris, if you fuck up.

Fuck up long enough and it's all the same: rubbing char against char, never clean. And we end bad. And want nothing but to be washed away.

So he cries and howls, yeah, but because I am a father, and a man, because I do not fuck up? he hopes.

I am pretty good at unwrapping imaginary gifts. I keep them close, remember their heft and import. I'm not so angry anymore. I do my work, and I keep my hands clean. I don't hit, and I let the boy believe.

This year, for Father's Day, I got some little things. Silly stuff. My favorite was from Molly, my oldest. She is my first, but the others come along, too; will also learn to take and use what I give freely and make better lives. God, I hope so.

But I know: It is real. And maybe with a firm, small pressure it can someday fix what I got wrong.