When the "gayby boom" came for me

For years, being a lesbian meant I never had to explain why I didn't want children. Not anymore 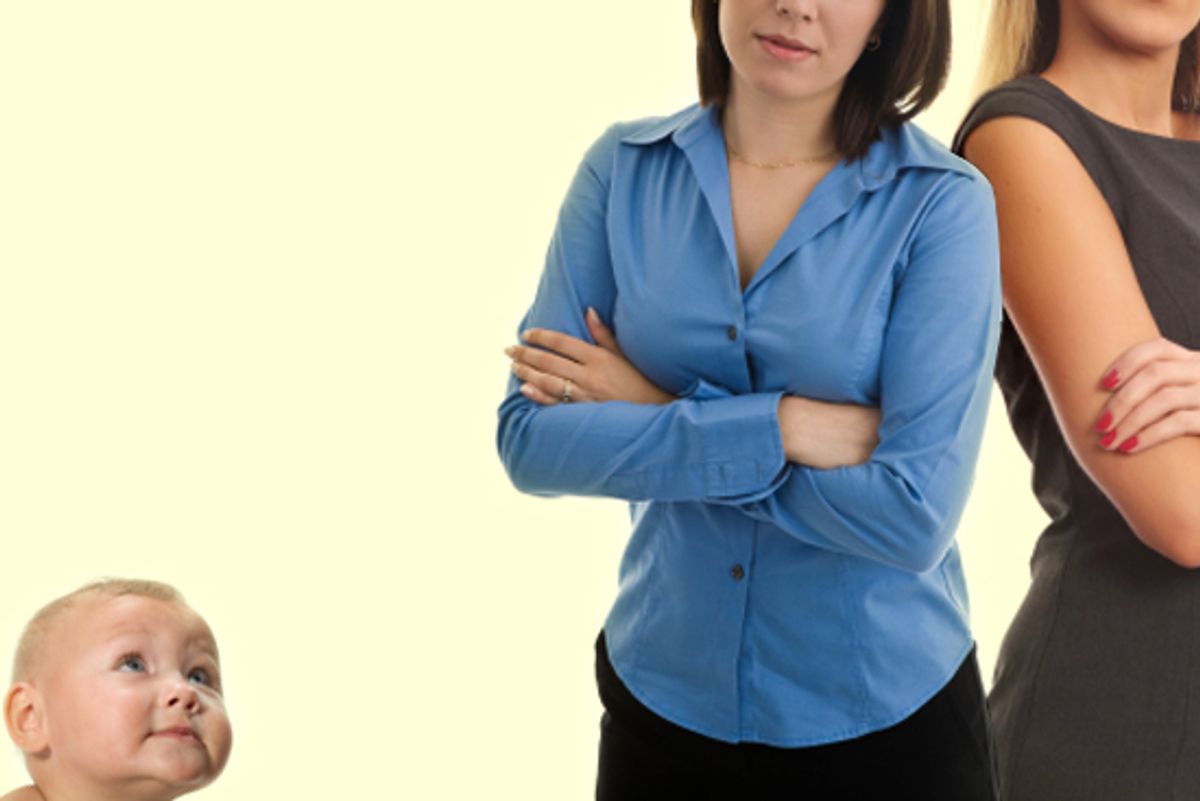 "Slide further down, right to the edge. Legs apart," prompted Dr. Lee, the OB/GYN I'd seen annually for years. "You're going to feel some pressure," she warned before inserting her gloved fingers. Then, continuing casually, "So, how's Melinda?"

"Six years in August." I smiled.

"You know," she said, peeking around my knees, "I recently helped another lesbian couple have a baby boy. Are you two thinking about kids?"

"Huh?" I propped myself up. I thought we were making small talk. For this, I needed eye contact. "That's not something we want," I said, hoping to leave it at that.

"OK, but know there are options," Dr. Lee probed. "If you and Melinda ever change your minds."

Sure. I laid back, nodding politely through a tight, clamped smile.

I never wanted to be a mother. As a child, I tucked Barbie into bed -- not baby dolls. Cuddling chubby infants didn't interest me nearly as much as perfecting my woman's dream home and sticking giant jewels in that hole in her hand. When Melinda and I got together, we saw our shared lack of interest in motherhood as a major compatibility point -- on par with sexual orientation and religion. We'd both been coaxed by maternal ex-girlfriends to be the "dads," but never -- until Dr. Lee -- had anyone nudged me to be the "mom." Well, except, of course, for my mom.

Mom used to be incessant about wanting grandbabies. Even after my brother had a couple of boys, she didn't miss a beat before starting up again with, "I want your grandbabies!"

"You'll change your mind when your friends are doing it," Mom insisted. Which was the exact opposite of what she said about peer pressure when I was in high school. Now she used it against me? Fruitlessly. My mind had been made up since 1991 when I baby-sat for the Hill family in Waukesha, Wis. They paid me $4 an hour -- a dollar a kid -- and left me dinner instructions, bedtime requirements (involving nightie lights, binkies and woobies), and laundry ... if I got the chance. Riding home with a $16 check to cash, I knew that'd never be the life for me.

"You'll change your mind when they're yours," Mom promised. "Or meet the right guy." She continued to say this long after I started dating women, but I didn't have the heart to correct her until I knew I was serious. The day I announced I was in love with the one-and-only I wanted to spend the rest of my life with, Mom's face lit up in a full mother-of-the-bride beam. Until I said Melinda's name and it fell sharply as if I had dropped her white-tiered wedding cake.

"But I want you to get married and have babies! I don't want you to be homosexual!" she cried.

"Mom," I reasoned with her, "that wouldn't happen if I was with a man."

"You don't know that! At least there's a chance!" she said.

For what: An accident?

I knew our options. Though it was totally progressive of Dr. Lee to offer assistance, I had been kept oh so apprised by ex-girlfriends as well as other lesbians in my life who were busy family planning.

I could be inseminated at the Cryos International Sperm Bank downtown on Maiden Lane -- seriously, 90 Maiden Lane! Its website listed a deep, studly roster of donors, but Melinda's younger brother had already offered us his. He stacked up well: blond, blue eyes, strong jaw, captain of his high school football team -- and bonus, related. Melinda and her brother bore such a strong resemblance to one another that they could've passed for fraternal twins; so I had a feeling that even after I carried it, the baby would look like them. My light brown hair, hazel eyes, soft teeth, and bad skin didn't stand a chance at dominating their Midwestern, farm-stock genes.

At least I hoped. It'd be a relief when strangers cooed, "Who do you look like, mommy or daddy?" that I could answer honestly: Melinda.

Then there was the surrogacy option. If Melinda and I had our hearts set on hiring another woman to carry our child, we'd definitely take a cross-country trip to Growing Generations in Los Angeles. This revolutionary clinic has helped lesbians become moms for over two decades -- with packages starting at $50,000. But here in New York, I knew of another opportunistic (aka illegal) option somewhere between surrogacy and adoption: baby buying. An old colleague of mine wrote a check to her pregnant cleaning lady for her fetus. A year later, she wrote another one for the baby brother.

Of course, one of us could legally adopt a child through a legit agency -- as a single parent. My friend Rachel adopted two kids through Spence-Chapin. On paper Rachel was a lone LGBT mom, even though everyone knew her domestic partner, Amanda, and their story. They'd been together since the '80s, suffered in-vitro failure through the '90s, and joyfully adopted in 2000. In 2003, more New Jersey paperwork officially made them both guardians. Yet, the agency still periodically called Rachel asking if she'd share her experiences with "other single mothers." The institution of adoption, like marriage, still had some evolving to do.

Even with all of these options, I still didn't want to be a mother. Why not? And how could I explain it to Mom?

She had wanted me, badly. Back in the early '70s, endometriosis destroyed most of her reproductive organs, causing doctors to shake their heads and insist on a hysterectomy. After eight years of trying -- everything -- my older brother was born. A little over a year later I came out bawling. My parents often quipped, "Took almost a decade to get the first one, but only one night to get Amy." So I tried a joke of my own.

"Mom," I sighed. "Are you sure you really want to be called the Significant [Grandm]Other?"

I felt her brooding.

I could tell she wanted to yell grown-up versions of what she screamed at me as a kid. Something like, "Go to your room and don't come down until you can say you're pregnant!" But instead she asked, "Was it something I did?"

Wrong. I filled in the last word: Was it something I did wrong?

The truth was, at 31, I was thriving. I had a career and ambitions and a really nice home. My happy, committed partnership was more than enough; it was bliss. Melinda and I went on dates. We read. We regularly traveled to destinations that most only dream of going once -- on their honeymoons. I didn’t want kids, because I had finally become the woman I had always wanted to be.

"OK," Dr. Lee said, snapping me back to the doctor's office by pulling off her rubber gloves. "Your uterus still tilts to the left, but that shouldn't complicate things if, well ... just remember you have options."

She left me, sitting in rumpled paper covers with lube leaking on my thighs. You're going to feel some pressure, I mocked, as I wiped myself off. Normally, I bolted out of her office, but that day I sat on the table, crossing and uncrossing my legs.

My mind was set, right? It had been a while since I'd thought about kids and my aging fertility. Melinda and I didn't talk about it, and Mom had stopped bringing it up. These days, she seemed content to hear about my week instead of suggesting what my next steps should be. I gazed at the wall, until the gestation posters covering it came into sharp focus. My half-second of doubt disappeared. I jumped off the table and into my clothes.

Immediately upon leaving, I called Melinda.

"Dr. Lee just topped me," I said, looking around for any pregnant women within earshot before telling her the whole story of my straight, Asian gyno trying to make a baby in me, while I was flat on my back with my legs up in stirrups.

"Totally cool of her to offer," I said.

"Totally," Melinda said. "But why would we choose that?"