"The Pain Chronicles": The science of pain

Why are some people impervious to physical suffering while others can't seem to escape it? An author explains 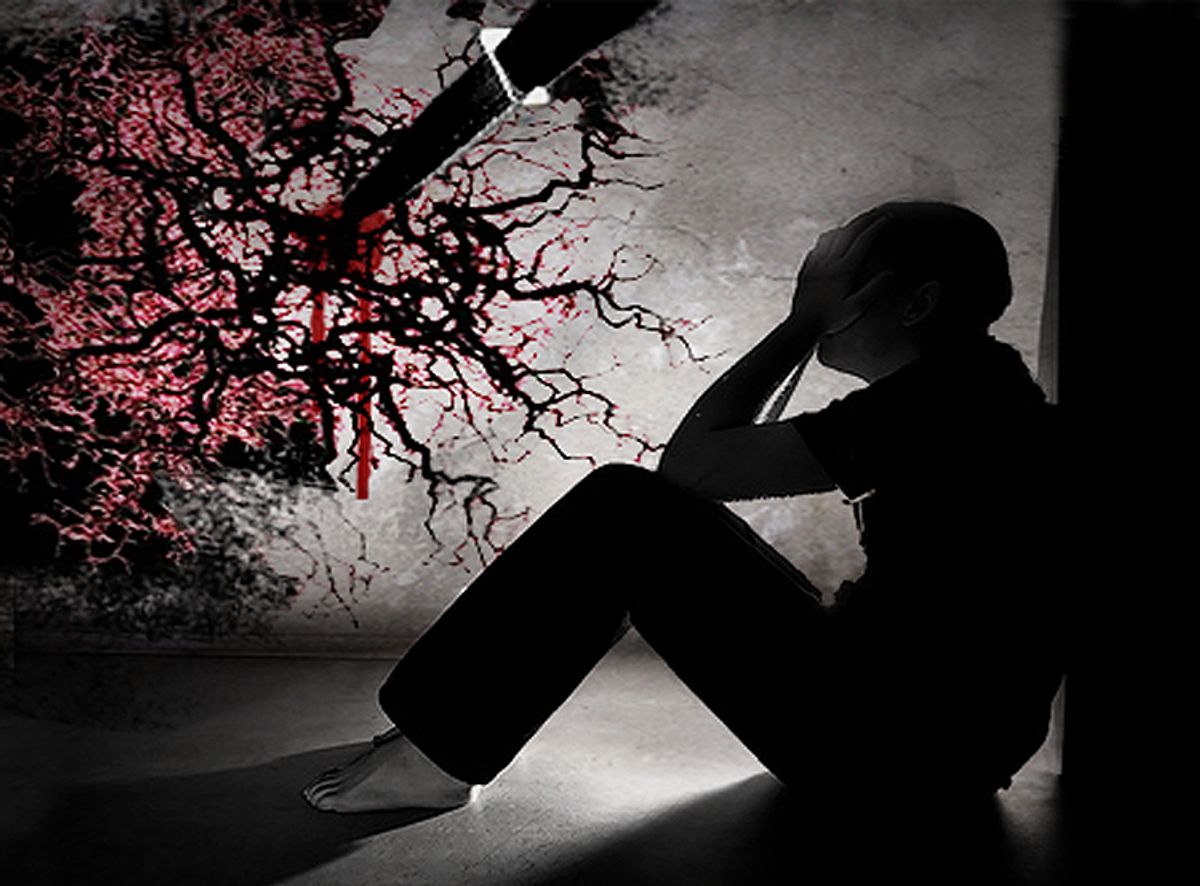 Melanie Thernstrom’s pain began inconspicuously, as a burning ache in her limbs after a long swim. But instead of drifting away over the next few days, the feeling dug in, traversing her neck and shoulder and eventually smothering her entire right arm. She popped aspirin, applied hot compresses, and simply tried to ignore it, but slowly the reality became clear -- this pain wasn’t going anywhere. For the next several years, she bounced from doctor to doctor searching for an effective treatment for her mysterious ailment. Despite being young, active and seemingly healthy, Thernstrom had joined the ranks of the more than 70 million Americans who suffer from debilitating chronic pain.

In her new book, "The Pain Chronicles: Cures, Myths, Mysteries, Prayers, Diaries, Brain Scans, Healing, and the Science of Suffering," Thernstrom, a writer for the New York Times Magazine, shadowed doctors and talked with patients about the science and experience of pain. Despite its being so common, she discovered, chronic pain remains a massive medical enigma, hard to treat or even isolate. She met amputees who complained of a constant ache in their missing limbs, women who felt like their entire bodies were bruised when there was not a scratch on them, and hundreds of others haunted by the invisible and devastating burden of constant pain -- all the while pursuing a cure for her own suffering (which turned out to be caused by a degenerative arthritic condition in her spine). Her book examines the human experience of pain through the lenses of science, history, philosophy and memoir, creating a comprehensive and thoroughly engaging portrait of a force that all of us have experienced, but few of us truly understand.

Salon spoke to Thernstrom over the phone about the science behind our suffering, how some people can control pain, and why others are more sensitive than most.

Pain is a very bizarre phenomenon because everyone has felt it, so we all know what it’s like on some level, but at the same time it’s very hard to accurately remember and describe.

Yes, I find that very interesting. Pain is a non-verbal experience and yet we have only our words to describe it and try to get help. But the fundamental way in which it’s not verbal makes it much more difficult to seek attention and relief -- you have to first persuade your physician that you’re in pain and need treatment, and that can be extremely difficult.

The amount of pain someone is in isn’t directly related to the severity of their injury. Why is that?

Pain is a very mysterious phenomenon. We think of it as a very accurate measure of tissue damage, the way certain instruments measure the size of an earthquake and tell you if it is going to be big or small. But pain is not like that at all. It’s more like love, a subjective perception in the brain. Sometimes it can tell accurately how severe the injury is, but often it cannot.

One of the mysteries of chronic pain has always been, why does it worsen over time? If it was actually an accurate reflection of tissue damage, it should get better over time as the tissue heals. But in fact very often patients’ experience belies that. The chronic pain gets worse as the original injury heals and takes on a life of its own. It causes changes in the brain and the nervous system that lead to more pain. A doctor I talked to compared it to water damage to a house. The longer it continues to leak, the more damage will be incurred, and eventually the house will just collapse.

But despite the severity of chronic pain, often you have almost nothing to show for it physically. And that makes treating pain really subjective.

A pain specialist once said to me, you have to value a person to value their pain. So it’s no surprise that poor people and minorities are the least likely to have their pain believed and treated. They also often have the fewest resources to pursue pain treatment. And it used to be in earlier eras -- peaking in the 19th century -- there were all these racist theories about how Africans couldn’t suffer from pain, that they were literally less pain sensitive than white people. The Victorians believed in a hierarchy of pain sensitivity with savages and slaves at the bottom just above animals and then rising up from there. Poor people were less sensitive than members of the upper class and most sensitive of all were white upper-class women.

However, in contrast to these theories about Africans being less pain sensitive, there is very interesting contemporary research that shows that African-Americans are actually more pain sensitive on average and suffer from greater levels of chronic daily pain.

Women also suffer from chronic pain at a higher rate. Why?

All kinds of pain syndromes are more prevalent in women, and women are also more sensitive to pain than men. But there are other issues as well. Women go to the doctor at a higher rate than men, so they are more likely to seek medical attention for pain, but they are less likely to successfully get treatment. There have been studies showing that women are more likely to be referred for counseling or given psychotropic medication, while men are more likely to be prescribed physical therapy or referred for surgery. It seems that men’s reports of pain are often seen as more credible. Also, most pain specialists are male and most pain patients are female, so that is an additional element in play. For women in particular, a great deal of energy often goes into successfully playing the part of someone suffering pain in order to get treatment.

In your book you describe witnessing a religious ceremony in Malaysia in which pilgrims hung weighted hooks from their chests and performed other rituals that should have been extremely painful--all the while showing no signs at all that they were suffering. How do you explain the fact that some people can undergo experiences like that and feel no pain?

I was very puzzled by these mystical reports of transcending pain in a religious context. I had read about pilgrims in Hindu festivals mutilating themselves and claiming that they were in no pain or Filipinos enacting these crucifixion rituals at Easter. Honestly, I just didn’t believe it. I knew theoretically that pain is a perception and that the brain can turn it on and off, and in certain states of mind the brain will turn off pain, but it’s very hard to believe unless you see it.

We in the West are familiar with this when there is a threat to survival. A flight-or-fight instinct can turn off pain. This is why, when you read an account of a shark victim, often they’ll say that they didn’t feel that their hand was bitten off, they just noticed the water was filled with blood.

So is that what happens to these people who are skewering themselves?

Yes, exactly. But instead of a threat to survival they’re being preoccupied with thoughts of God. But it’s the same thing in a trance. All of their attention is directed toward the thing that they want it to be directed towards, and the pain information is not admitted in. It’s thought to be stopped at the level of the spinal cord. They’re actually not feeling any pain.

Is knowing that people can choose to reject pain like that useful to doctors who study pain, or to you personally as a pain patient?

It’s very easy for us all to be able to do it in the case of a threat to survival. But to be able to do it in a voluntary sense, that is much more difficult. These pilgrims have a lifetime of training. They have to really and truly believe that God will take away their pain. It is essentially a very strong placebo effect. When you believe that you have pain relief your brain will make that true by not generating a perception of pain.

It seems like many treatments for chronic pain do involve a placebo effect. Why is that?

You need your brain to cooperate with the pain treatment and kick in some of its own ability to modulate pain. Even morphine, the gold standard of pain treatment, relies on placebo for part of its effect. If you give someone morphine covertly, without them being aware of it, it’s one-third less effective than if you say, "We’re putting morphine in your IV now. This is a powerful painkiller and you will feel much better soon." Morphine mimics the brain’s own pain modulation and you want the brain to give you some of its own endorphins and other pain-modulating neurotransmitters.

But I imagine it must be incredibly difficult if you've had chronic pain for a long time to ever convince yourself that something is going to work.

That is the problem! Chronic pain patients are very poor placebo responders because they expect to be in pain. And one of the big reasons that treatment works much less well for them is because they’re not getting placebo benefits.

The brain doesn't just provide positive side effects. The placebo effect also has a sinister evil twin -- the nocebo effect.

Yes. Nocebo is the other side of the coin. We know placebo generates positive effects like painlessness or other kinds of healing based on belief, but the brain can also create negative effects of the same kind. The ultimate nocebo is death by curse, when people who believe that they’ve been cursed really do die after a few days. That is an actual documented phenomenon.

That brings up an interesting point, which is that being religious can impact how we interact with pain. What exactly does faith do to pain?

It’s complex and some of the evidence is contradictory, but basically there are negative forms of religious faith and positive forms. Positive forms of faith, such as believing that pain strengthens your faith or brings you closer to God, actually do help people feel better. But negative religiosity, the idea that illness means God has abandoned me or perhaps doesn’t exist, has the power to dramatically harm the health of pain patients.

Having studied all of these different ways of dealing and interacting with pain in writing this book, what have you found most helpful for treating your own chronic pain?

In some ways I feel like I’m still waiting for my treatment to be invented. I guess physical therapy has helped me, and understanding pain has helped because it’s given me a framework to evaluate the success of my treatments. Making the psychological shift that I don’t have to be pain-free in order to be happy was huge as well. I thought at the beginning that I have to have my pain cured in order to be happy and now I feel like as long as it’s modulated and moderated, that that is OK.

In the West in modern times we don’t expect to be in any physical pain. It’s not part of our sense of life, although it has been for most of history, and so therefore to have pain feels wrong, it feels outrageous, it feels upsetting because it seems like a violation of what we think of as a normal life. So I think changing that sense itself helped me.

All that said, I would still love to be cured.