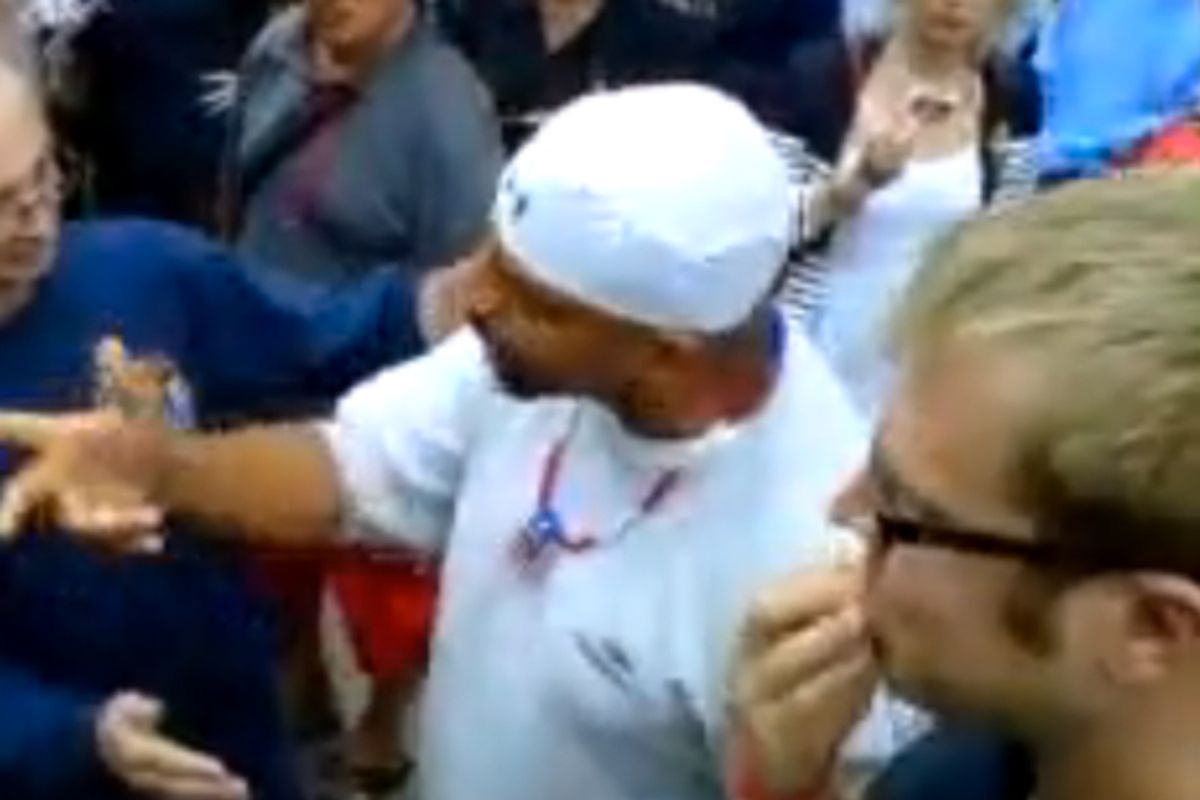 The man who recorded a now-viral video of "ground zero mosque" protesters angrily shouting at an African-American passerby Sunday told Salon this morning that a mob mentality took over the crowd as the confrontation escalated and some protesters apparently assumed -- wrongly -- the African-American man was Muslim.

Aaron Webber, 32, said he is a graphic designer who lives in Astoria, Queens, and works in midtown Manhattan. He read about the planned protest of the mosque in the news and decided to go down and document the protest with live updates on Facebook. The confrontation with a black man wearing a skullcap -- who says in the video he is not Muslim -- occurred as Webber got up on a platform to record the protesters chanting "No mosque here!"

"Moments after I noticed a commotion in the crowd," Webber said.

That's when protesters began confronting a black man who later identified himself to Webber as Kenny, a union carpenter who works at ground zero. "People were getting in his face and threatening him and calling him a coward," Webber said.

Webber, who describes himself as liberal-leaning, said he did not know Kenny or anyone else at the protest. He said that the protesters were denouncing Islam itself, not merely the community center project.

"I got the distinct impression that this rally transcended anti-mosque sentiment. It was in fact very anti-Islam. One guy had a sign that said 'Islam=slavery,'" Webber said.

When Webber asked the man if he was serious, Webber said the man replied: "It's an evil cult and America must destroy it."

"It was also very anti-Obama. It was not that Obama himself is a terrorist, but people were expressing that he was enabling the terrorists," Webber said.

He said that the man in the blue baseball cap and athletic shirt -- who tries to calm down some of the protesters screaming at Kenny -- appeared to be an organizer of the rally. The man in the suit at the end of the video -- possibly a police officer -- asked Kenny politely to leave, Webber said.

When Webber caught up with Kenny down the block, Kenny was surprisingly calm about what had happened, Webber said. Kenny told Webber of the man in the blue construction hat who confronts him in the video: "The crazy thing is, this guy probably works at ground zero. I probably work with this guy."