The credit card pound of flesh gets pricier

As expected, banks respond to a crackdown on their abusive behavior by raising rates. But we're still better off 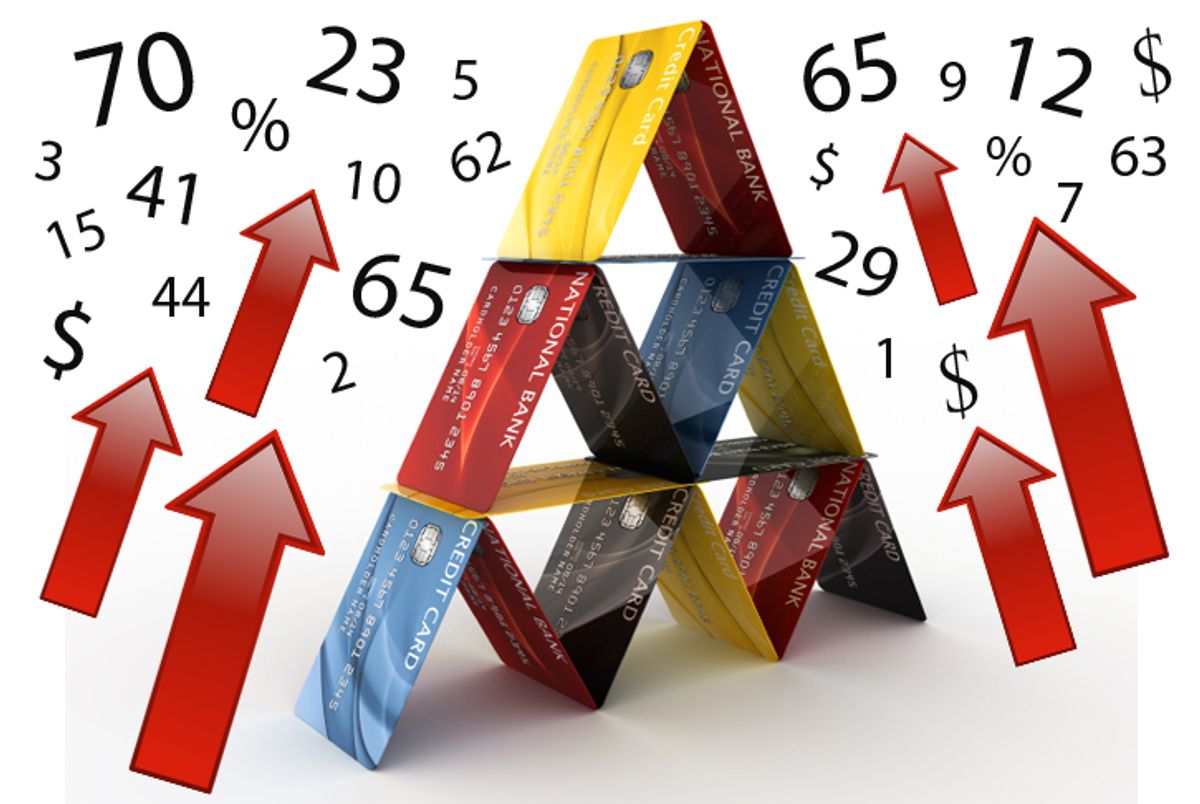 It is no coincidence that the Wall Street Journal chose to mark the moment new rules kicked in that clamp down on abusive credit card practices by running a front page story declaring that credit card interest rates are on the rise.

On Aug. 22, the final phase of the Credit Card Accountability, Responsibility and Disclosure Act of 2009 came into effect, instituting new limits on penalty fees and other requirements. (US News & World Report has a good breakdown on the changes here.)

The juxtaposition jibes all too nicely with the warning frequently voiced on the Journal's opinion pages that any attempt to reduce credit card company profits by clamping down on exorbitant fees or arbitrary, outrageous interest rate hikes would be answered by higher across-the-board interest rates and scarcer cheap credit.

To her credit, Journal reporter Ruth Simon gives some room to people pushing back on this thesis. First, there's New York Democratic Rep. Carolyn Maloney, the sponsor of the CARD Act:

Rep. Carolyn Maloney (D-NY), said that despite the rising rates, the law benefits consumers because it eliminates unwelcome surprises and provides them with a clear picture of the costs they will face. "Better that consumers should know up-front what the interest rate is, even if it's higher, than to be soaked on the back-end by tricks and hidden fees."

Then there's the kicker, in which a banking lobbyist notes that, once the economy improves, competition will inevitably offer borrowers lower rates.

"This is a very competitive industry," says Kenneth Clayton, senior vice president at the American Bankers Association, a trade group. "Somebody will take advantage of lower defaults to drive prices down."

The Journal doesn't give us too much detail on the new rules. Let's pick out just two: Late fees can no longer be larger than your minimum payment, and you can't be charged multiple fees for a single transgression.

For example, under the old rules, you could miss a $10 minimum payment, and get slapped with a $30 fine. And if the $30 fine happened to knock you above your credit limit, you could get hit with another fee for breaking that rule, too.

Maloney is right: Getting upfront information about how much your credit will really cost is a feature, not a bug, of the new rules. And if that means less accessibility to cheap credit, is that entirely a bad thing? The illusion that money was cheap fostered bad behavior at every level of the U.S. economy prior to the great credit crunch. Now, as documented by the Federal Reserve Bank of New York's quarterly report on household debt and credit, Americans have been closing their credit card accounts and paying off their outstanding debt. Perhaps if credit had been more expensive to begin with, we wouldn't have gotten in so far over our heads. And perhaps the real reason that the credit card companies are raising their rates has more to do with the fact that prudent consumer behavior is cutting into their bottom lines, than to the new rules.

And yes, of course the banks will find ways to game the new rules. But that's why we now have a Bureau of Consumer Financial Protection to guard our backs. So let's get Elizabeth Warren on the job, pronto!