Roger rages, Sally seizes control -- and Betty and Don start to miss the comfort of make-believe 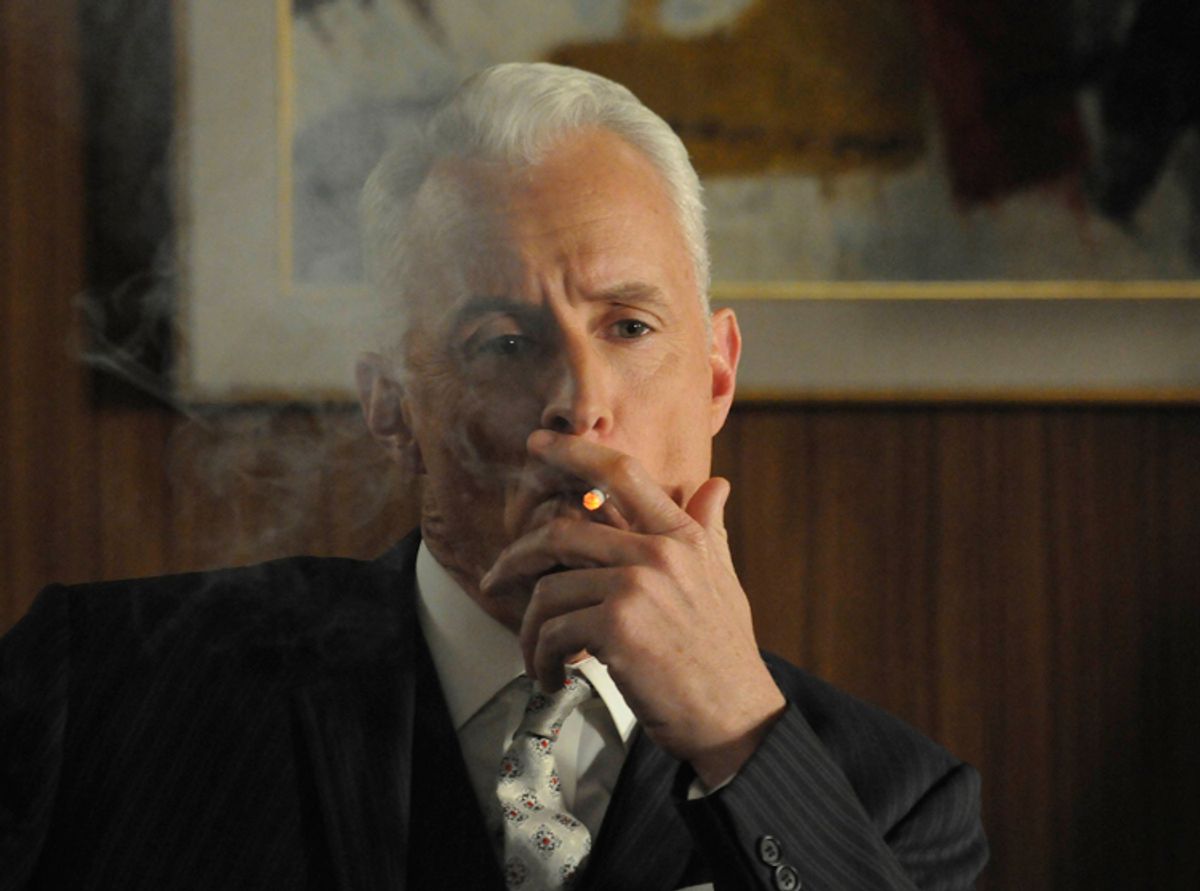 "It is not going well." This is how Don Draper sums up his life in the wake of his divorce, finally admitting that he's not the magic man he imagined himself to be at the start of the fourth season of "Mad Men." His daughter is acting out, his wife hates his guts, his best friend in the world is dying (or may already be dead, based on Mrs. Blankenship's failure to reach her), and SCDP is struggling to stay afloat.

Forces are conspiring against Don in "The Chrysanthemum and the Sword," from Ted Chaough to Betty to Don himself, but as always, these conflicts -- ostensibly for clients or for love or for self-respect -- end up playing out in more shallow waters. Betty's allegiance to Don has soured to hatred, but mostly because Don's absence and neglect of Sally reflects her own. Roger's misplaced rage at the Japanese from Honda rises up from some long-forgotten nostalgia for a time when Roger wasn't just a wisecracking shell of a man, when he had real friends and a genuine stake in the world beyond empty flirtations and emptying cocktails. And the central battle of the episode -- to win over the Honda executives -- becomes less about gaining an actual account and more about protecting Don's and SCDP's honor from the scrappy claws of Ted Chaough and rival firm CGC.

When battle lines are drawn based on the thinnest of premises, talk of loyalty is rampant, from Roger's loyalty to his fallen fellow soldiers to Joan's loyalty to Greg to Chaough's questioning the loyalty of Smitty after he calls Don a genius. Ultimately, though, all of this loyalty is as empty a gesture as a cantaloupe wrapped up in a pretty yellow box. Likewise, romance is reduced to acquisition, self-knowledge is merely a means of playing nicely with others, and love -- for someone else and for yourself -- is shunned in pursuit of keeping up appearances. It's fitting that the Honda competition, an arbitrary hoop for SCDP to jump through, has nothing to do with pitching an actual campaign. The point is to blindly honor the Honda execs' wishes: "Here are our rules, you must compete for our attention."

Don Draper's date, Bethany, tries to send Don the same message. First she complains that Benihana isn't intimate enough, and we see a glimpse of a more genuine, flawed woman lurking behind those glossy, pouting lips. "My hair smells like I've been frying chicken," she whines, ever focused on herself as she's perceived by Don. This is the irony of Bethany's competition for a husband: She insists that Don follow her rules and compete for her attention, but to what end? To win a domesticated existence that already feels beneath her.

But once Ted Chaough appears to openly challenge Don, their date looks like it could fall apart completely. Bethany shifts gears, cooing, "We're not gonna let this spoil our evening, are we?" It's so easy to project Bethany into a terrible marriage with Don, floating around the house, trying not to spill anything on her dress. In case the names don't say it all, Bethany is Betty 2.0, what Henry's mom might call a "silly woman" who's possessed by appearances but who has little to offer beyond her shiny exterior.

As usual, there are plenty of perfectly reasonable, real women around Don: But Phoebe, the babysitter and Don's neighbor, is dismissed for reflecting Don's negligence back at him. She does nothing wrong, of course, other than failing to stop Sally from slipping out of Don's control when Don doesn't have time or attention for her in the first place. "You should talk to your mommy," Phoebe tells Sally, not realizing how impossible that is to do.

And then there's Dr. Faye Miller, the sexy psychologist with the diamond "stop sign" on her hand, who's some combination of Anna (full of empathy, interested in the "real" Don) and Betty (cold, calculating and willing to lie to serve her professional life). In fact, Faye may be Don's female counterpart, a fragile, emotionally volatile soul trussed up in a smooth professional carapace, willing to cast her personal life aside in the interest of keeping the inconvenience of untoward advances out of the picture.

But before you start imagining Faye and Don riding into the sunset together, remember how Don feels about himself (his misreading Betty's rejection as a reflection of his inferiority rather than fallout from his dishonesty; his enjoyment of being slapped in the face like a bad boy by the hooker). No matter how dignified and empowered Faye may now seem, Don will surely find some way to break through to her soft interior and then reject her for the ways that her flaws reflect his own. Even now that Don is free to find a woman with the integrity and soul of Rachel or Suzanne, he'll no doubt wander into the arms of some polished, inscrutable doll like Bethany. Don may be intrigued by genuine human beings who live in the real world (Phoebe at the hospital, Suzanne at the elementary school), but he very much prefers to live in a world of make-believe. (Tellingly, Bethany is an extra in the opera, costumed to match each imaginary universe constructed onstage.)

And speaking of imaginary universes, what could be more heartbreaking than watching a mother not only deny her child some control over her own appearance, but also deny her access to her own sexuality? Instead of fading into whatever background is selected for her, like Bethany, Sally finds herself impulsively grabbing the reins to see what might happen. It's brilliant that Sally isn't making a statement against either of her parents yet (the way Glenn already has in trashing Sally's house); that would be the most obvious choice, and the "Mad Men" writers are far more nuanced than that. Instead, Sally is merely seizing control of her physical self. As basic a right as that might be, in Betty and Don's world it's unthinkable that Sally would start demonstrating anything remotely resembling a free will.

I also love how Sally's hilarious masturbating to "The Man From U.N.C.L.E." is revealed to Betty: First, Sally's friend's mom tells Henry Francis, rather mysteriously, "I found Sally behaving inappropriately." Then she insists on speaking to Betty, to whom she says, "That kind of behavior is not allowed in my house, and certainly not in the presence of my daughter." (Just glad we don't live in your house, lady.) Betty has a chance to stand up for Sally, but of course declines to do so. "I am very sorry for this behavior, and so is Sally. I would've done the same thing," she tells the woman, hinting at the hypocrisy of her stance: We all would've done the same thing, of course -- and we did. "You don't do those things," Betty tells Sally, denying the facts on the ground. "You don't do them in private and you especially don't do them in public." Finally, of course, it all boils down to how all of this reflects on Betty herself. "I'm mortified. I'm so embarrassed!" she laments to Henry Francis.

But then we learn that Sally has been acting differently ever since Grandpa Gene died, and the two of them were "very close." Uh-oh. If Sally ends up having been molested, just imagine how supportive and helpful Betty will be about that. Did the same thing happen to Betty? How will that reflect on her marriage to father-figure Henry? Something tells me that soon, those shots of Henry and Betty rolling around under the sheets will give way to the two of them at opposite ends of the bed. The two things that Henry's good at – coddling Betty and making out with Betty – will suddenly be taken out of the picture, leaving Henry feeling helpless and Betty feeling alone. (Henry tries to give Betty advice, of course, but she's not interested in his thoughts. "I don't want to hear it," she tells him, echoing Don's words to Phoebe, "I don't want your advice, OK?" and also Pete Campbell's warning that the Japanese should never be criticized or given advice.)

The writers of "Mad Men" are fantastic at this dramatic reverb, so beautifully rendered last week with a mirroring of worlds that climaxed in Peggy and Pete choosing opposite paths in life. Last night's episode featured some breathtaking contrasts as well, starting with Roger Sterling's insistence on loyalty to his fallen friends, which stood in contrast to Pete's business-is-business, let's-all-do-what's-expected stance. I love how Pete insists that, unlike Roger, he can rise above the personal to be an advocate for SCDP, but then he reduces Roger's resistance to a personal grudge -- not with the Japanese, but with Pete himself. This childish, center-of-the-universe perspective bubbles up constantly and makes Pete such a great character. Anything less than a full-bore pursuit of new clients is declared a personal affront to him, henceforth. "I am expecting a child!" he proclaims indignantly.

But my favorite parallel scenes had to be Don, confessing his feelings to Faye in the office kitchen, followed by Betty, confessing her feelings to Sally's psychologist Dr. Edna. For Don, such interactions can't lead anywhere but the bedroom; for Betty, these discussions are as unwelcome as a public masturbation session. You can almost hear the gears inside her mind grinding: "You don't do those things, you don't do those things!" Inching closer to the truth will undoubtedly cause Betty to lash out in self-protective indignation even more than she's already doing. While plenty of loyal viewers will likely find themselves struggling with heartless Don and cold, rejecting Betty, it makes perfect sense that these two characters would be at their very worst at this particular juncture: Betty is inching up on some devastating realization that a second marriage won't save her from herself (or some unknown darkness in her past?), and Don is absolutely flailing in the vacuum of his dreary apartment. As much as these two blamed each other for their unhappiness, they're both starting to recognize the perils of life outside of their shared imaginary world.

And, far from an indication that her former marriage is over, Betty's rage at Don ("I want him dead!") tells us that she still feels passionately about him, and that strength of feeling could bring the two back together again, particularly if the truth of her relationship with her father isn't something she wants to explore. In his support of Sally seeing a psychologist, Henry has demonstrated that he's interested in the truth; ultimately this may be what drives him and Betty apart, and brings Don (who is consistently repulsed by the truth) and Betty back together.

For now, though, we continue to see the battle between what each character wants and what is expected of them, moving from Peggy (who pursues what she wants, sometimes to her detriment) and Pete (who embodies the barely contained rage of the repressed) to Sally. Sally is told very clearly: We expect you to comply with our wishes, to live quietly wherever you're planted, to look the way we want you to look, to tolerate being ignored and neglected, to keep up appearances even when it means denying yourself what you truly want. This is how you build the perfect, soulless, self-hating cipher like Don or Betty or Bethany.

But something tells us that Sally's not going down like that.