Six Somali parliamentarians among the dead 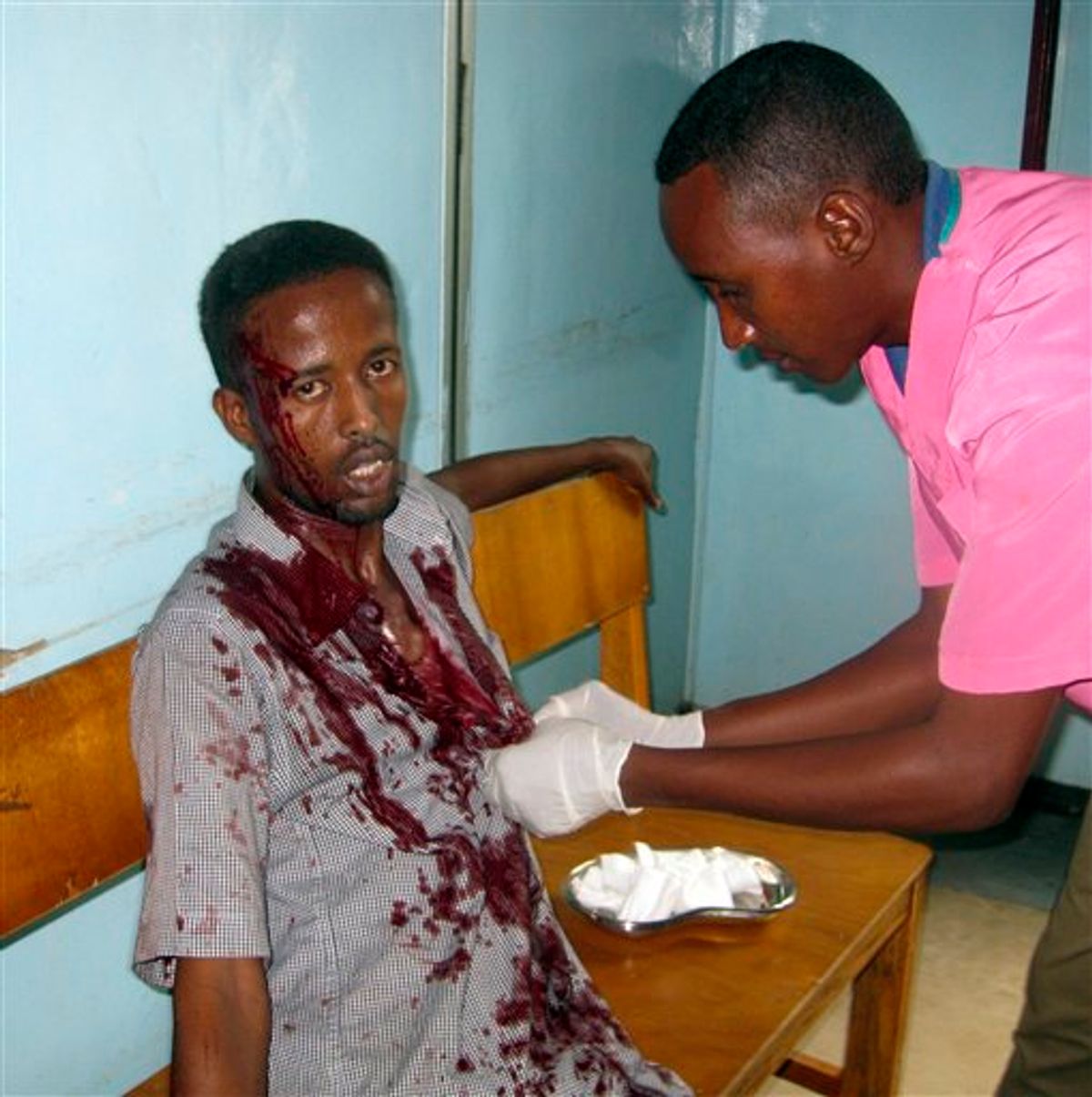 A nurse at Medina hospital treats a wounded civilian,at Medina hospital, Mogadishu, Somalia, Tuesday, Aug. 24, 2010. after he was wounded by mortar shrapnel during fighting between Somali insurgents and African Union troops. A suicide bomber and gunmen stormed a hotel in Somalia's capital on Tuesday, killing at least 15 people including members of parliament in an attack that set off an hour-long gun battle, a military spokesman and a witness said. (AP Photo/ Mohamed Sheikh Nor) (AP)
--

Witnesses described a horrific scene of dead bodies throughout the Muna Hotel and guests scrambling to safety by escaping out of windows.

The multi-pronged assault came less than 24 hours after the country's most dangerous militant group -- al-Shabab, a group allied with al-Qaida -- threatened a "massive" war against what it labeled as invaders, a reference to the 6,000 African Union troops in Mogadishu.

The attack on the Muna Hotel raised the two-day toll to at least 70 people, a high number even by Mogadishu's violent standards. Fighting that rocked Mogadishu on Monday killed 40 people, health officials said.

An 11-year-old shoe shine boy and a woman selling tea in front of the hotel were among the dead, African Union spokesman Maj. Barigye Bahoku said.

"They have no motive other than to terrorize the Somali people. This is a deplorable act in this holy month of Ramadan. It shows their brutality and lack of respect for humanity," said Abdirahman Omar Osman, Somalia's information minister.

A survivor described a frenzied, one-hour battle inside the four-floor, $10-a-night hotel.

"Smoke filled my room after bullets smashed my window. I hid myself in a corner of the room. Then a guest next door came to my door, screaming 'Come out! Come out!' And when I came out bullets continued to fly around.

"I went back to my room and locked my door. Shortly afterward, the hotel staff asked me to come down and put me in a room at the second floor with four other survivors," she said. "The body of a member of parliament was lying at that small room's door."

Sheik Ali Mohamud Rage, a spokesman for the al-Shabab militia, said that members of the group's "special forces" had carried out the attack against those "aiding the infidels."

While Mogadishu has a small, government-controlled zone near the seaside airport, al-Shabab operatives frequently infiltrate the area, and the attack is only the latest proof that al-Shabab has molded itself into a full-fledged insurgent force capable of daring, complex assaults.

In a similar attack in December, a suicide bomber detonated himself at a university graduation ceremony near Tuesday's hotel attack, killing 24 people, including three government ministers, medical students and doctors.

In its first international attack, al-Shabab last month claimed responsibility for twin bombings in Uganda's capital during the World Cup final, explosions that killed 76 people who had gathered to watch the televised match. Al-Shabab said the attack was in retaliation for Uganda's role in the African Union force in Mogadishu.

Militant veterans of the Iraq and Afghanistan wars are believed to be helping train members of al-Shabab, which has pledged allegiance to al-Qaida.

Somalia has not had an effective government for 19 years. Islamic insurgents led by al-Shabab have been trying to topple the government from Mogadishu since January 2007. The AU force has ensured the government stays because the force's mandate is to protect key government officials and installations such as the air and sea port in Mogadishu.