The airline's blue-and-white globe was a Jet Age classic. Today, too many carriers jump on the ugly bandwagon 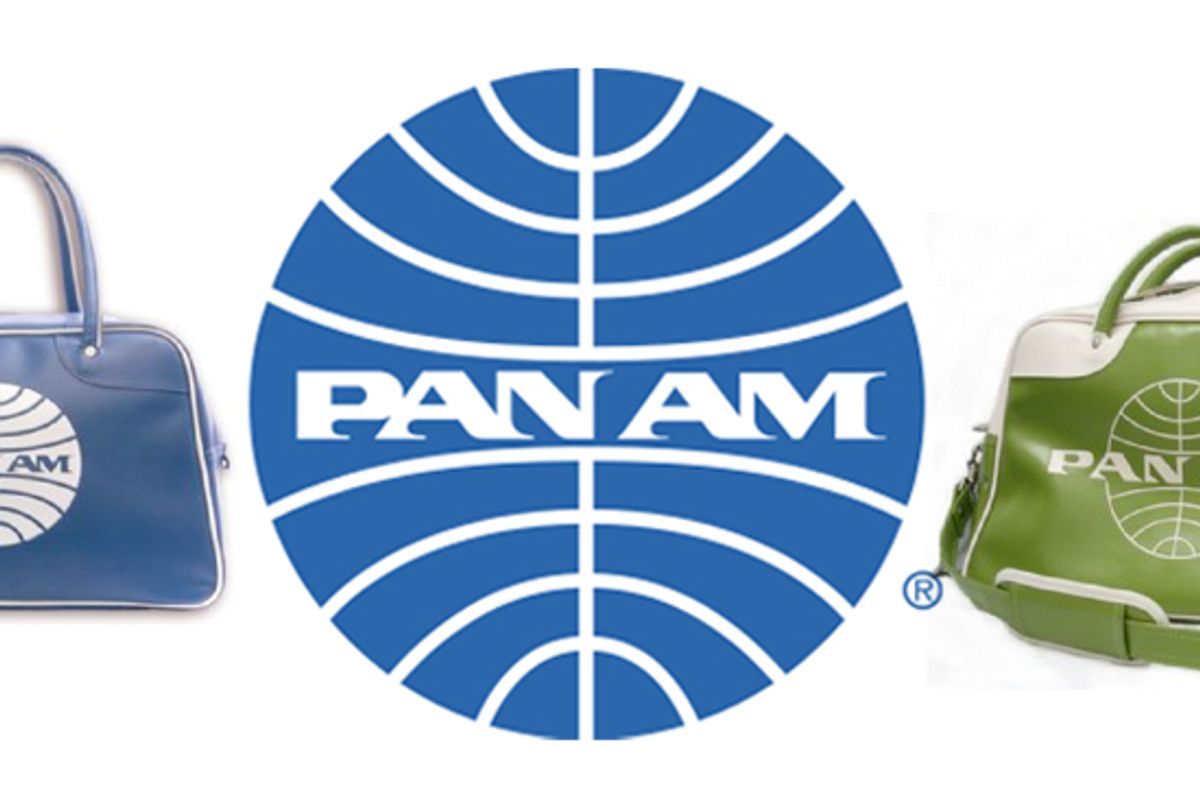 It's time again to talk about airline logos and livery design, just for a minute. Because I like to and because it's fun.

And because there is a new company called Pan Am Brands, which is selling travel merchandise (luggage, passport wallets), using the old Pan Am trademark. See here.

I have mixed feelings about this venture. On the whole it's pleasing to have the Pan Am name being kept alive, one way or the other. One of the downsides, though, is how this ruins things for those of us who happen to own real vintage Pan Am bags and products. Suddenly we're confused with the kind of people who'll spend $170 for a designer gym bag.

And I hope they don't get carried away and start marketing perverted versions of the livery in the way sports teams do nowadays -- i.e., pink Red Sox caps.

Oops, too late. You can buy a "Pan Am" bag in olive green. Juan Trippe is spinning in his grave.

That blue-and-white Pan Am globe was such a Jet Age classic, was it not? So simple, elegant, timeless. It has been said that a truly successful logo is one that a young child can render by hand with reasonable accuracy. Pan Am's globe certainly fit that criterion, and had the airline not gone bust, one suspects it would have stuck with it, more or less unchanged.

And it dawns on me too that Pan Am's is perhaps the only airline identity ever to lend itself to a commercial product outside of aviation. That's saying something about both the legacy of Pan Am, and the sunken state of modern air travel. Southwest Airlines designer luggage? I don't think so.

Kudos, meanwhile, to those dwindling few carriers that have held onto their longtime trademarks, albeit with minor tweaks. The best and most enduring is probably the "AA" of American Airlines. Aeroflot as well deserves a round of applause, having retained its elegant hammer and sickle long after the breakup of the Soviet Union (just don't get me started on Aeroflot's tail; see GMST below). Lufthansa's stylized crane is another.

We continue mourning, however, over the obliteration of the historic Tsurumaru crane at Japan Airlines.

As discussed in this space before, the current fixation in airline livery design is something I call the GMST, or Generic Meaningless Swoosh Thing. (Actually, this was a term concocted by Ask the Pilot reader Amanda Collier several years ago.) Take a look around the tarmac. There are enough streaks, swishes, arcs, twists, swirls and curls out there to make anybody dizzy. The idea, we think, is to suggest a company that is "in motion," or "moving forward." In the process, sadly, they have become indistinguishable from one other.

Other industries, too, have jumped on this ugly bandwagon. UPS, for example. The original United Parcel Service emblem was a bow-tied box and heraldic-style badge. This was the work of Paul Rand, a legendary design guru who also did Westinghouse and IBM. It was a wonderful, heart and soul manifestation of the company's core mission: delivering packages. Its replacement is a singularly bland, almost militaristic "modernization." The box and string have been deposed, swapped out for a meaningless gold slash mark (GMST). It's the worst thing we've seen in the shipping business since the U.S. Postal Service came up with that monsterized eagle head.

Of course, UPS is an airline, at least in part. You can't say that for Holiday Inn. Check out the hotel chain's newest identity makeover. The old look was a touch too vintage Americana, but the latest rendering is staggeringly uninspired. It's a fat letter H with, yawn, a Swoosh Thing for the crossbar. That's it. It could be any company in the world, selling anything: insurance, computer products, food ...

For more on airlines and identity, see these two essays of mine, here and here, compiled from earlier columns here on Salon.