Dodd vs. Warren shows that government is broken

The senator says the professor can't be confirmed, so Obama, with two majorities, should compromise 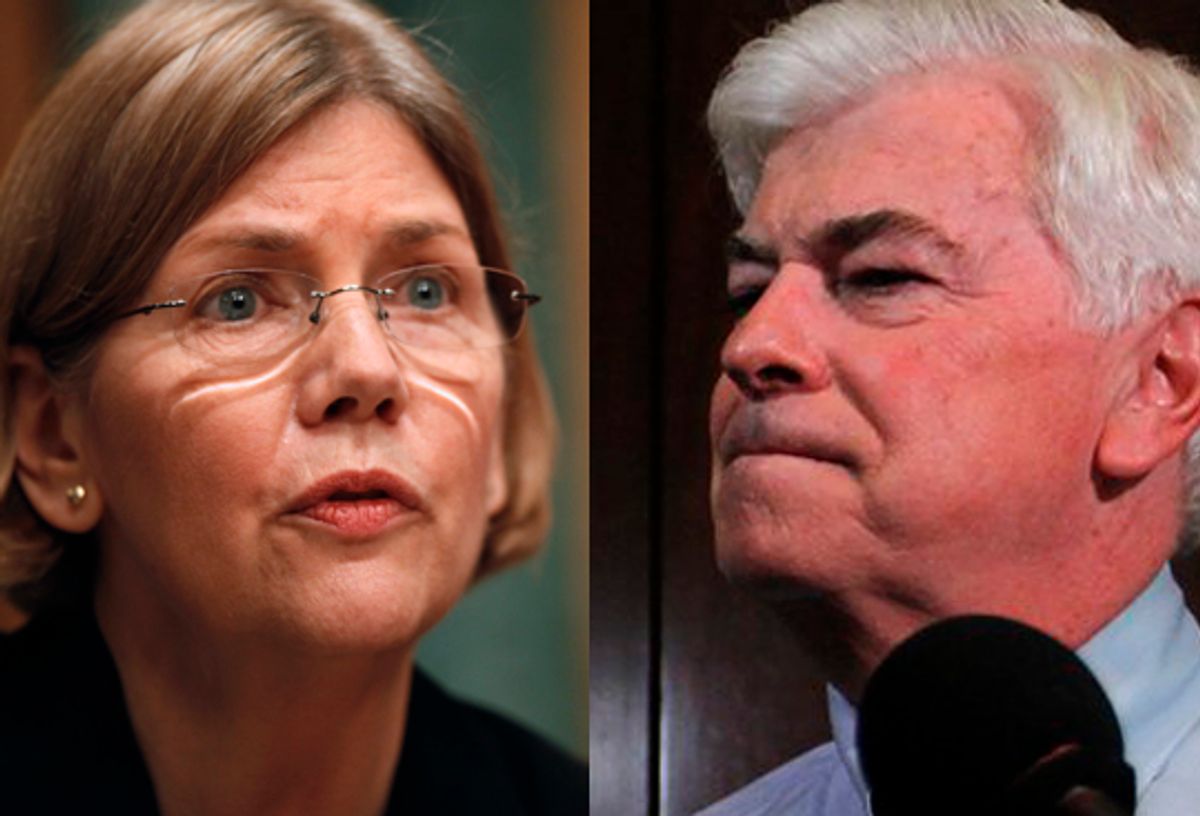 Alert the Elizabeth Warren media! We've known for at least a month that Sen. Chris Dodd, D-Conn., the lame-duck chairman of the Senate Banking and Finance Committee, isn't the biggest fan of the Harvard Law School bankruptcy expert whom progressives are championing for the job of director of the newly created Bureau for Consumer Financial Protection. Here's the latest news, from a lengthy American Banker interview with Dodd recapitulating the arduous legislative struggle for bank reform: He's still opposed.

Dodd acknowledged he wanted FDIC Chairman Sheila Bair to consider heading the consumer bureau, but he confirmed that she is not interested.

He also recognized that consumer groups were lobbying to have Harvard professor Elizabeth Warren head the agency, but he said she would have difficulty being confirmed.

"If the administration goes through an eight-month debate over who is going to run this, you are going to do damage before you start," Dodd said. "You need to have a good-quality individual, and if [Warren] can be confirmed, then step up and do it. I just think it's a problem, but I could be wrong."

But there's a deeper problem at play here than just tactics. A president whose party controls both houses of Congress with significant majorities, and who took office following one of the greatest financial crises in the nation's history, should have no problem appointing whomever he wants to an important new post created by bank reform legislation that, rightly or wrongly, will be seen as one of the Obama administration's signal achievements. The notion that getting a consumer advocate into a position involving consumer advocacy might take eight months and not even succeed is ridiculous. That's not how government should work.

We can't dismiss the possibility that Dodd's concern over whether Warren can be confirmed is merely a smoke screen disguising some long-held antipathy toward her, instead of an honest appraisal of her chances. But there's another possible explanation, too: The insane, absurd rigmarole involved in getting anything accomplished in the U.S. Senate has drained all the life out of Dodd. Throughout the American Banker interview, Dodd repeatedly talks about the challenge of doing the best you can do under the circumstances you are in -- a process that requires constant compromise and accommodation and sacrifice.

"You want to write a good bill. You can get votes, but in order to get the votes your bill becomes a shadow of itself or you try and write a stronger bill but you don't get the votes. So what's the point, you don't have a bill," he said. "You try to write the bill in a way that would be a strong bill -- that those who are watching this would say this is a remarkable bill in terms of what it does and you've got the 60 votes to pass it."

Dodd said he was pulled and pushed from both sides.

"You are working against, what was it, a thousand lobbyists that got hired to work against this bill?" he said. "I don't have a Republican partner, I have a one-vote margin in conference. It's a complicated subject matter. I've got a left that doesn't think you're being strong enough and a right that thinks you've gone too far."

Further exacerbating the situation: The other side stands to gain politically by preventing you from succeeding at all, and is willing to pretend to negotiate as a pure stalling tactic. You might think that, now that he is no longer running for election, Dodd would feel free to lambaste this mockery as the sham that it truly is. But the opposite has happened. Dodd seems to be suffering from a form of Stockholm syndrome. He's been part of a broken system for so long that he's completely internalized its rules. If GOP willingness to abuse the process of how legislation gets made becomes standard operating procedure to the point where even non-Cabinet appointments become all-out political wars, then so be it. Better to accommodate, than fight.

In this sense, the fight over Elizabeth Warren is a proxy fight over the currently inoperative system of government we are suffering under, because there's little question that in many ways the Obama administration has mirrored Dodd's capitulation. As a result, it is true, legislation has been passed. We have healthcare reform and bank reform. But we also have a right-wing outraged at even the pale "shadow" of reform and a left wing apoplectic at how little has been achieved.

That leaves precious little room for cheerleaders. No wonder Obama's approval levels keep sinking. The set of people willing to make the argument that "something is better than nothing, even if that something is achieved by sacrificing your true goals in the face of intransigence from your enemies and spineless accommodation from your allies" was never big to begin with, and gets smaller every day.