Jonah Goldberg: Caring about Muslims is a hate crime against Real Americans

The conservative columnist decides America has no anti-Muslim problem, and if you disagree you hate Americans 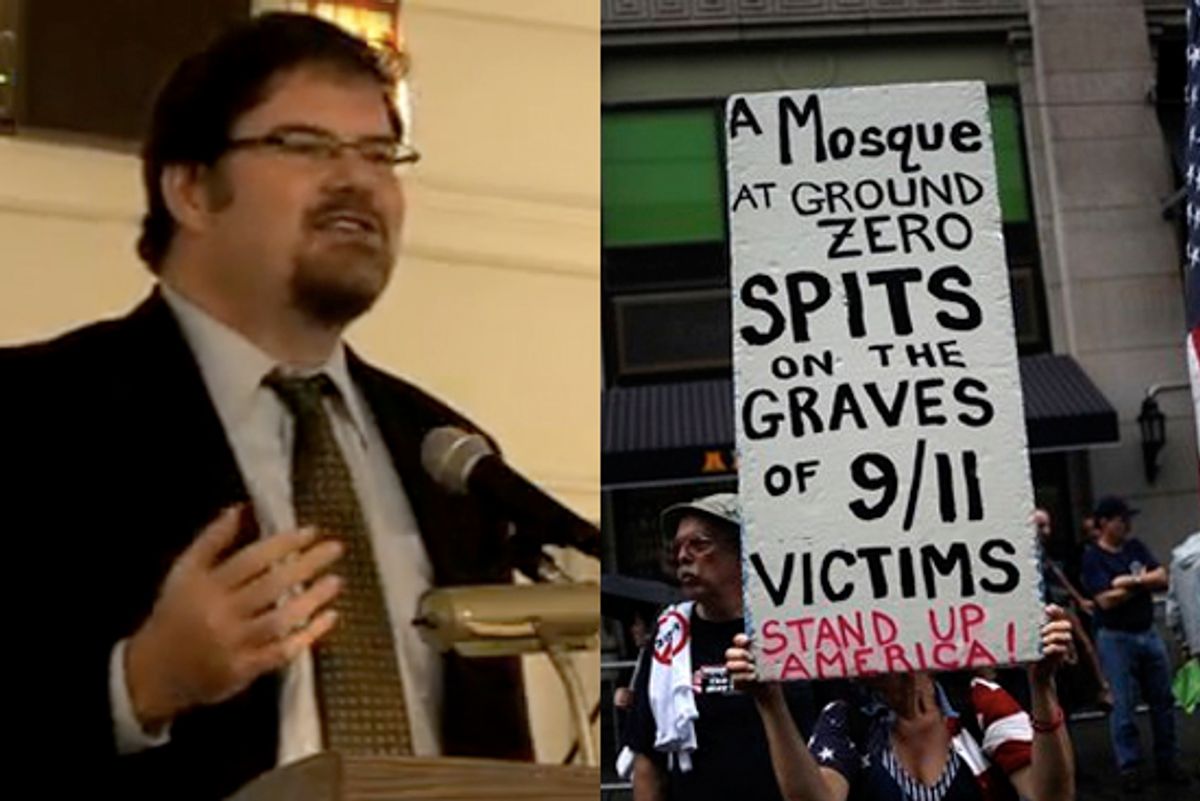 Jonah Goldberg, whose columns are apparently published in grown-up newspapers for consumption by literate adults, uses today's to expand on a theme that he first toyed with at The Corner last week: Liberals are the real intolerant ones because they make up "Islamophobia" and accuse Real Americans of it.

Here's a thought: The 70% of Americans who oppose what amounts to an Islamic Niketown two blocks from ground zero are the real victims of a climate of hate, and anti-Muslim backlash is mostly a myth.

First: "an Islamic Niketown"? What ... what does that mean? Will there be shoes for sale? Are Americans objecting to the commercialization of the sacred ground near but not adjacent or particularly related to the former site of the World Trade Center, where a complex of commercial office building are currently being constructed? Couldn't Goldberg, who is Jewish and from New York, have come up with an analogy that actually helped explain to his readers what he is talking about?

The data backing up Goldberg's thesis? FBI hate crime statistics. That's it. There were only 481 hate crimes against Muslims in 2001, "the year a bunch of Muslim terrorists murdered 3,000 Americans in the name of Islam on Sept. 11," Jonah helpfully reminds us. ("Now, that was a hate crime," he adds, because he is a truly execrable columnist.)

Goldberg certainly doesn't like hate crimes, but he finds that to be an acceptable number of them. Although, the ADL presented the FBI's numbers with the disclaimer that "anti-Islamic" bias crimes are hard to classify, because people were going around stabbing Sikhs and blowing up Hindu temples in the weeks after 9/11. One group, using contemporary media accounts, found 645 incidents of bias in the first week after 9/11.

And as Conor Friedersdorf pointed out when Goldberg first tried this line, even outside of outright crime or incidents of harassment or threats, the entire national media conversation became, at times, incredibly anti-Islamic. Goldberg claims, hopefully (but probably not) in jest, that occasionally "heated" anti-Muslim rhetoric is dwarfed by "open bigotry toward evangelical Christians" on the Op-Ed page of the New York Times. If anyone can point to anything published in the Times that is as hysterically anti-Christian as, say, any random week's worth of Andy McCarthy's contributions to the National Review, please let me know.

Then there is the fact that this miserable summer has, from sea to shining sea, featured  enraged white people staging marches in the street attacking all Muslims as terrorist sympathizers, for the crime of wanting to build a house of worship in their communities. And the entire conservative political elite, along with a huge portion of the supposed other wing, refuse to even bother to condemn it. (Indeed, they indulge it! The Muslims in New York are all told to be more "sensitive" to the angry white people!)

So you can maybe see why some people are concerned about an atmosphere of intolerance toward American Muslims, and the possible effects of such an atmosphere. It is about more than just FBI-identified bias crimes.

The "news peg" of that Time cover on Islamophobia that Jonah is so mad about is not some sort of lofty essay about stupid middle-American pigs being bigots; it is based on an actual poll, of the Americans themselves. Some fun findings:

Twenty-eight percent of voters do not believe Muslims should be eligible to sit on the U.S. Supreme Court. Nearly one-third of the country thinks adherents of Islam should be barred from running for President -- a slightly higher percentage than the 24% who mistakenly believe the current occupant of the Oval Office is himself a Muslim.

Forty-four percent of Americans have a favorable view of Muslims. Even Mormons top 50 percent.

I'm just saying that before we go around congratulating ourselves, as a nation, for not spending even more time vandalizing the property of people we suspect to be Muslim and physically attacking anyone in a turban, we should maybe ask ourselves if we are setting the bar a bit low.

But Goldberg apparently thinks that it's bigoted against real Americans to be at all concerned about bias against American Muslims, because Goldberg, who does not give a shit about American Muslims, does not think the coordinated nationwide campaign to make people uneasy about them has led to that much violence.

This, actually, is the funniest line from Goldberg's piece:

Meanwhile, to listen to Obama -- say in his famous Cairo address -- you'd think America has been at war with Islam for 30 years and only now, thanks to him, can we heal the rift. It's an odd argument given that Americans have shed a lot of blood for Muslims over the last three decades: to end the slaughter of Muslims in the Balkans, to feed Somalis and to liberate Kuwaitis, Iraqis and Afghans.

Well, if that is how you interpreted that speech, I can understand why you'd find it "an odd arguments." Lots of arguments probably seem odd when you don't understand rhetoric or logic. But, yes, Jonah Goldberg still thinks America is owed a great big fucking thank you from all the people we've been "liberating" in Iraq and Afghanistan, and Barack Obama should spend less time apologizing to people who hate us for our freedom and more time apologizing to people who hate him because they think he's a Muslim.