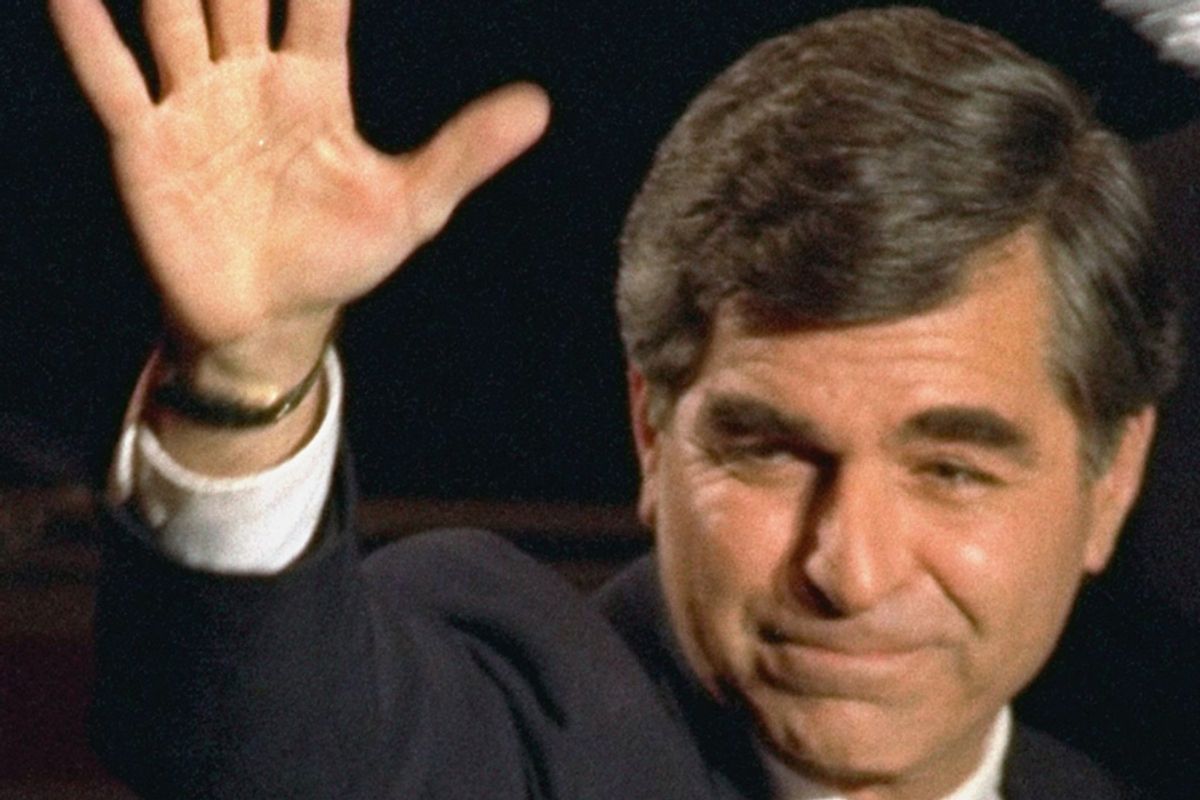 In the best sports movie ever made, "Hoosiers," Barbara Hershey’s character, perhaps the lone resident of hoops-crazed Hickory, Ind., not to have been bitten by the basketball bug, explains the downside of venerating high school athletes.

"I've seen them, the real sad ones," she says. "They sit around the rest of their lives talking about the glory days when they were 17 years old."

That same sentiment can be applied to more than a few right-wing pundits and commentators. But it’s not long-ago basketball games that they’re desperate to relive: It’s the 1988 election. That, in case your memory is fuzzy, was when Lee Atwater, Roger Ailes and the rest of George H.W. Bush’s political brain trust sold a crucial chunk of swing voters on a caricature of Michael Dukakis as a weak, criminal-coddling and unpatriotic technocrat. A mid-summer deficit of 17 points was turned upside-down and Bush went on to score a commanding victory.

The country has long since moved on, of course. The Bush presidency was a one-term flameout, and we’re now on our third president (two of them two-termers -- so far) since he left office. Dukakis retired from politics 20 years ago and now, at 76, contents himself by teaching political science at Northeastern University, often making the two-mile commute by foot (and stopping to pick up litter on the way). Almost no one under 35 even knows who he is, or remembers much of anything about the ’88 election.

But to some on the right, every campaign since then has been ’88 all over again -- and every Democrat to set foot on the national stage has been the next Dukakis. Case in point: the Weekly Standard’s newest issue, which proclaims that Barack Obama’s administration is actually "the lost presidency of Michael Dukakis."

How so? As Noemie Emery, the piece’s author, puts it, Obama and Dukakis are:

…both creatures of the liberal Northeast and of Harvard, with no sense at all of most of the rest of the country; both rationalists who impose legalistic criteria on emotion-rich subjects; both with fixed ideas of who society’s victims are, which do not accord with the views of the public; and both with a tin ear for the culture and a genius for creating wedge issues that split their own party.

Emery then suggests that the "ground zero mosque" issue will prove as costly to Obama as the Willie Horton issue did to Dukakis. It won’t (more on this in a minute), but Emery’s piece is still well worth reading, since it unintentionally demonstrates the right’s refusal to give up the dishonestly inflammatory cultural tactics that it employed in '88.

The Horton issue (again, in case you’ve forgotten) involved a convicted murderer, Willie Horton, who while on a weekend furlough from a Massachusetts prison had escaped, fled to Maryland and raped a woman. Dukakis, who was Massachusetts’ governor when this happened, had been in favor of such furloughs. Thus, Horton’s name became a staple of Bush’s speeches and an "independent" pro-Bush group aired this notorious ad.

The story wasn’t nearly as simple as the right made it out to be, of course. Among other ignored facts, furlough programs were actually routine, the Massachusetts program had been initiated by a Republican governor (Frank Sargent), and two California prisoners furloughed under a governor named Ronald Reagan had escaped and killed. Plus, even with its furlough program, Massachusetts under Dukakis was actually tougher on convicted murderers than almost any other state, thanks to a mandatory life sentence law. In other states, convicted murderers were paroled -- not furloughed -- after an average of 11 years in custody, but in Massachusetts, weekend furloughs couldn’t even begin until two years after that. Under Dukakis, Massachusetts had the lowest murder rate of any industrialized state.

But the Bushies weren’t interested in context. In Horton, they spied a perfect opening to feed and profit from the fears of white suburbanites -- people who had fled urban America in the late '60s and '70s amid an influx of black residents, rising crime, and school busing. Horton’s face was a reminder of why they had decamped (or why their parents had), and of the "soft on crime" liberalism they’d come to blame for the loss of their cities.

More than two decades later, the right is playing the same game with the Park51 community center. And, unfortunately, it's had considerable success in appealing to Americans’ latent fear of Muslims. But the idea that it is about to turn Obama into the next Dukakis is silly, for one simple reason: The right already gave it its best shot, and failed -- miserably.

That was two years ago, when Obama was the Democratic nominee for president. As with Dukakis in ‘88, Obama built a steady lead in the summer of 2008 -- and, as in ’88, the right turned to cultural fear-mongering. It emphasized Obama’s middle name and tried to make "community organizer" the epithet that "liberal" had been in ’88. Sarah Palin accused Obama of "palling around with terrorists." Vile signs deriding Obama as a socialist, communist, terrorist or worse popped up at GOP rallies with regularity. And on and on.

But unlike ’88, it didn’t work. Obama walked away with 365 electoral votes, a larger share of the popular vote than any Democrat since LBJ, and a bigger chunk of the white vote than either John Kerry or Al Gore had enjoyed. To be sure, many voters bought into the right’s fear-mongering -- but many more rejected it.

That’s a crucial difference from the example of Dukakis, who never managed to make voters comfortable with him. It makes Obama a lot more like Bill Clinton, who in 1992 overcame a caricaturing campaign that was equally as intense as the one Dukakis faced (pot-inhaling, Vietnam avoidance, antiwar activity at Oxford, a trip to Moscow) and defeated Bush.

Like Obama, Clinton watched his support among white swing voters evaporate in the first two years of his presidency. But his ability to win the trust of those voters in the first place was telling. They'd heard the GOP's case and came away liking Clinton in spite of it. With the economy improving and popular anxiety waning, they came flocking back to him in ’96. Mosque or no mosque, there’s no reason to believe they won’t eventually do the same with Obama -- if the economy turns around. (If it doesn’t, they won’t. But it won’t be because of the mosque.)

But don’t expect the right to give up its Dukakis obsession -- even though it’s yielded exactly one popular vote victory since November 8, 1988. They still have the memory of the time it worked beautifully, and like the aging ex-hoop stars of Hickory, Ind., they just can’t let go.