What "true" espresso is, and how Americans ruin it

An Italian master tours the super-hot U.S. high-end coffee scene and is shocked at what we've done to his art 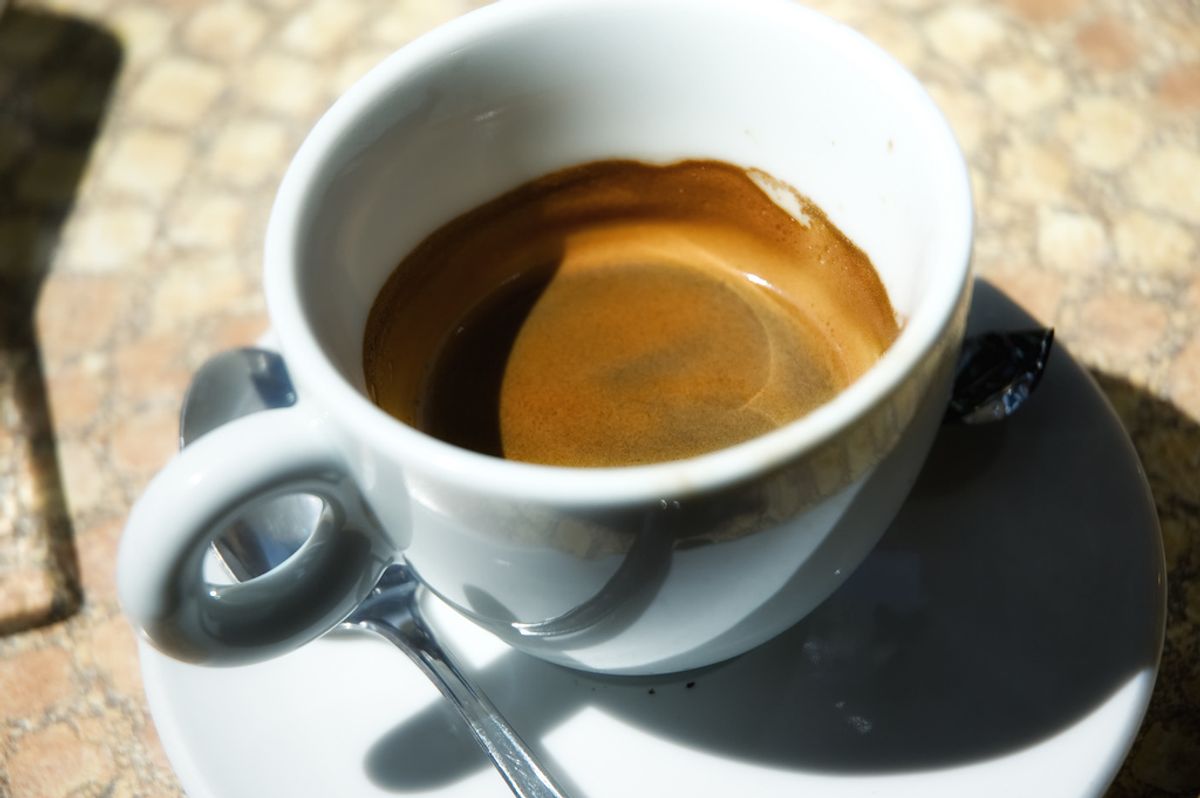 Giorgio Milos, the master barista at the high-end Trieste, Italy-based illy – whose familiar red logo adorns cans of quality coffee in 140 countries – stands inside a trendy downtown coffee shop in New York City and sucks in his cheeks. Something is wrong with the espresso he has just drunk. It has some of the right components – a bit floral, a bit chocolate – but there's an astringency that makes him compare it to a green apple. "A good cup of espresso has to be balanced between sour, bitter, and sweet," he explains. "Maybe they are using old beans."

Those are scalding words for one of the best coffee shops in a city percolating with so many new ones that in March The New York Times decided to list the 40 "best." The irony is that until a few years ago New York couldn't compare to the Pacific Northwest -- where the specialty-coffee trade was born in the '60s -- or cities like San Francisco, Los Angeles or Chicago. In New York, drinking diner coffee was almost a badge of distinction. But now the market here for specialty espresso has grown so frenetic that even Portland's groudbreaking Stumptown and San Francisco's Blue Bottle entered the East Coast fray, suddenly turning the city into an all-star showcase of American coffee.

So the darkly suave Milos is visiting from the birthplace of espresso for a year to gauge the state of coffee in the United States, illy's largest customer outside Italy, and he has quickly learned how seriously Americans take their coffee. Call it a storm in a demitasse: He elicited a frothy response when, while blogging for theatlantic.com in May, he commented that American baristas not only need more training but are using so many different, unorthodox methods to pull shots you'd wonder if they'd ever sipped the drink in its country of origin.

"What is called espresso here sometimes really isn't espresso," he wrote. (The response from readers made him qualify that, saying that any drink pulled on an espresso machine is 'technically' an espresso, but baristas shouldn't be playing fast and loose with the traditional water-coffee-temperature-time formula.)

One barista from San Francisco huffed that Milos' article was culturally irrelevant and "American baristas no longer look to Italy for context." Americans, he said, are creating their own traditions, such as making espresso with single-origin beans – i.e. beans that come from one farm or estate, to highlight the characteristics of that place – while Italian espresso is made from blends that often include some lesser-quality – i.e. Robusta – beans. In illy's blend there are no fewer than nine bean types.

"It's not bad to do something a bit different," Milos says of the concoctions coming out of coffee shops across the country. "But in order to create something new, you have to follow the baseline, to know how to do something the real way. Then try to do something different. In Italy we have a saying: Learn to walk before you run."

Another respondent pointed out that Milos hardly has room to talk. The last time he competed in the World Barista Championships – which was won in June by American Michael Philips – he came in 27th.

"A competition is not real life," Milos counters, although he admits he did not perform his best.

But at least one self-identified veteran of the coffee business was on Milos's side, saying that "the ultra-ristretto, staggeringly bitter shots being pulled by the likes of Vivace and Vita [both in Seattle] have nothing to do with espresso other than being a fascinating misuse of the machine ... It's undrinkable swill fit only for burying under a half-liter of foamed milk and flavorings (and THAT, friends, is America's unique contribution to coffee culture)."

Coffee is the second-biggest traded commodity after oil , and America buys 22 million of the 130 million bags of coffee beans produced worldwide annually. On paper at least – and according to the Specialty Coffee Association of America – the formula for making an espresso across the 50 states is meant to be exactly the same as in Italy. Water: 1 oz. Coffee: 7 to 8.5 g. Temperature: 200 degrees F. Time of extraction: No more than 30 seconds. But plenty of baristas from Brooklyn to San Francisco, from Chicago to Miami, are using as much as 20 grams of coffee in an ounce of water, which, says Milos, makes an espresso look syrupy and sexy but is too overpowering to taste.

"Here in the U.S. the coffee they use is good, but the way they prepare it is bad," he says. "Fifty percent of the result of a good espresso is in the hands of the barista. And if consumers can't recognize that, we lose."

The former No. 27 international barista is spending 2010 in America to train not only baristas at illy's Universitá del Caffé (New York's UDC is one of 10 around the world) but also consumers. Even though Starbucks might have taught Americans to buy cappuccinos and lattes – and pay more than three bucks a pop – Milos believes consumers have never learned what those drinks should actually taste like. It's one thing ordering an espresso or a macchiato, another thing altogether being able to tell whether you got a good one.

A good espresso, he says, will depend on what coffee beans you use. But the final product should be judged on five qualities. There should be bitterness (but not too much), sourness (in balance with the bitterness), a bit of sweetness (which usually comes from some Central American bean), good body (which will depends on the preparation and the coffee used), and an aroma.

"I can't say what kind of aroma," he adds, "but it has to be aromatic. And that aroma will depend on the coffee that was used."

Following Milos' mantra to walk and not run, we do exactly that: We walk to four coffee shops that make up part of New York's burgeoning West Coastlike, post-Starbucks generation. Added flavors like hazelnut creamers are anathema and there are a limited number of espresso-based beverages that all get pulled individually. "Regular" coffee, when served, often comes brewed to order, from a super-high-tech Clover machine or an elegantly simple Chemex drip. Milos judges the shops on one drink alone: espresso.

At Abraço, a hole-in-the-wall on East 7th Street, Milos smiles the moment he walks in. This is his idea of what a coffeeshop should look like: small, brisk service, no delay in getting the espresso to you once it's been made. He looks at his demitasse like a wine connoisseur might a vintage, then takes his first sip. "Better than some, a bit too concentrated. Very pronounced acidity. Not the best I've had but it left a good aftertaste."

Mutters one of Milos' friends, "For him that's a rave." Milos admits that he does not hand out praise a lot, but he is not a regular consumer and, as a coffee taster, it is his job to be critical. (Several places in the U.S. that he has a good word for are RBC in New York, Intelligentsia's outpost in Los Angeles, and Caffé Greco (which serves illy) in San Francisco.)

At Ninth Street Espresso's store on East 10th Street, the black dribbles down the side of Milos's demitasse aren't a good omen. Presentation is part of the experience. Milos sips, then says, "The real tasting is the second sip." He sips again, and decries the brevity of the flavor experiece. "Nothing remains on my tongue," he says. He swirls the remainder around in his cup like he's looking for an answer, and analyzes the crema, the "cream" of slightly frothy coffee that must top a properly-made espresso. "It is good, not too dark brown, the bubbles very small, and it has those red stripes we call tigerskin. The barista was good, he tamped the right way. The volume seemed right." But ultimately unsatisfied by the shot, Milos leaves the store unhappy.

The presentation at Café Grumpy's Chelsea outlet is better, but once the crema has worn off his espresso Milos reckons there is only about half an ounce of water. It is barely enough for a second sip. "This is real double ristretto. Aggressive. It's overextracted. You can taste bitterness at the end. Maybe the time of extraction is too long. It's better than Ninth Street."

Our last stop is Stumptown, the superstar Portland transplant in the Ace Hotel on 29th Street. It is the one place where Milos has been before, several times, because he likes the vibe, but each time he's come away hoping for a better espresso the next visit. When he gets his espresso there is a white stripe across the crema instead of the tigerskin. "See that? It's burnt. The machine is probably too hot." A second espresso arrives. It's also burnt. "This is less than one ounce. Very concentrated, very sour, very salty."

We leave Stumptown, Milos giving it the worst rating of the places we have visited today. As we exit onto the street, however, we both notice the same thing. There is a line of Stumptown fans going out the door and onto the sidewalk. He might not like what he’s buying, but they keep coming back for more.