The mosque debate "is a test of our commitment to American values," the mayor said in prepared Iftar remarks 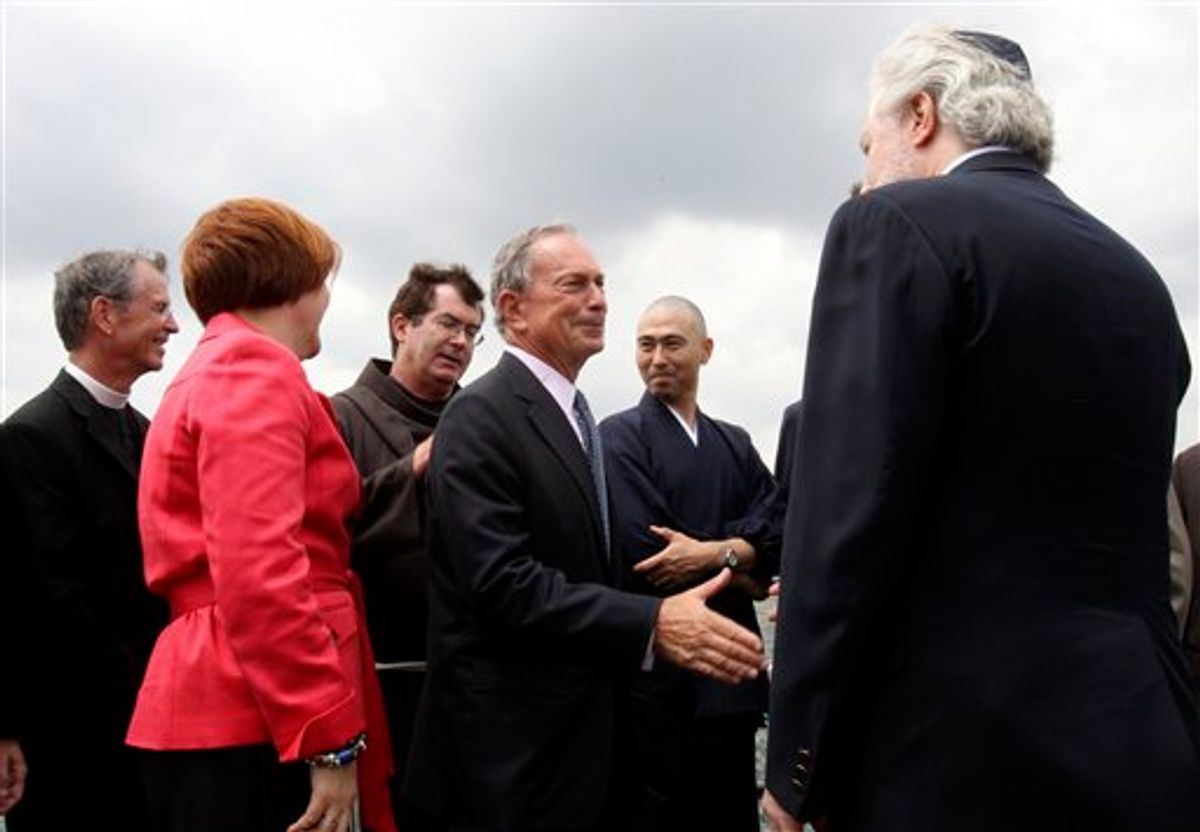 New York Mayor Michael Bloomberg, who has been at the forefront of the fight in favor of religious freedom in lower Manhattan since the beginning of the "ground zero mosque" debate, weighed in on the issue again tonight at the annual Iftar dinner at Gracie Mansion.

The prepared version of Bloomberg's speech, which you can read in full below, hits many of the same notes that his speech at Governors Island did earlier this month: vigorous support of religious freedom; opposition to those who are painting all Muslims as terrorists; and rejection of a "compromise" plan to move the planned Park51 Islamic center.

“I understand the impulse to find another location for the mosque and community center. I understand the pain of those who are motivated by loss too terrible to contemplate. And there are people of every faith -- including, perhaps, some in this room -- who are hoping that a compromise will end the debate.

“But it won’t. The question will then become, how big should the 'no-mosque zone' around the World Trade Center be? There is already a mosque four blocks away. Should it too, be moved?

“This is a test of our commitment to American values. We must have the courage of our convictions. We must do what is right, not what is easy. And we must put our faith in the freedoms that have sustained our great country for more than 200 years.

And the full prepared remarks:

"Good evening, and Ramadan Kareem. I want to welcome everyone to our annual Ramadan Iftar at Gracie Mansion.

"We call this 'The People’s House,' because it belongs to all 8.4 million New Yorkers who call this city home. People of every race and religion, every background and belief. We celebrate that diversity here in this house with gatherings like this.

“And for me, whether it’s marking St. Patrick’s Day or Harlem Week or any other occasion, these gatherings are always a powerful reminder of what makes our city so strong and our country so great.

"In recent weeks, a debate has arisen that I believe cuts to the core of who we are as a city and a country. The proposal to build a mosque and community center in Lower Manhattan has created a national conversation on religion in America, and since Ramadan offers a time for reflection, I’d like to take a few minutes to reflect on the subject.

"There are people of good will on both sides of the debate, and I would hope that everyone can carry on the dialogue in a civil and respectful way. In fact, I think most people now agree on two fundamental issues: First, that Muslims have a constitutional right to build a mosque in Lower Manhattan and second, that the site of the World Trade Center is hallowed ground. The only question we face is: how do we honor that hallowed ground?

"The wounds of 9/11 are still very much with us. And I know that is true for Talat Hamdani, who is here with us tonight, and who lost her son, Salman Hamdani, on 9/11. There will always be a hole in our hearts for the men and women who perished that day.

"After the attacks, some argued -- including some of those who lost loved ones -- that the entire site should be reserved for a memorial. But we decided -- together, as a city -- that the best way to honor all those we lost, and to repudiate our enemies, was to build a moving memorial and to rebuild the site.

“We wanted the site to be an inspiring reminder to the world that this city will never forget our dead and never stop living. We vowed to bring Lower Manhattan back -- stronger than ever -- as a symbol of our defiance and we have. Today, it is more of a community neighborhood than ever before, with more people than ever living, working, playing and praying there.

"But if we say that a mosque and community center should not be built near the perimeter of the World Trade Center site, we would compromise our commitment to fighting terror with freedom.

"We would undercut the values and principles that so many heroes died protecting. We would feed the false impressions that some Americans have about Muslims. We would send a signal around the world that Muslim Americans may be equal in the eyes of the law, but separate in the eyes of their countrymen. And we would hand a valuable propaganda tool to terrorist recruiters, who spread the fallacy that America is at war with Islam.

"Islam did not attack the World Trade Center -- Al-Qaeda did. To implicate all of Islam for the actions of a few who twisted a great religion is unfair and un-American. Today we are not at war with Islam -- we are at war with Al-Qaeda and other extremists who hate freedom.

"At this very moment, there are young Americans -- some of them Muslim -- standing freedoms’ watch in Iraq and Afghanistan, and around the world. A couple here tonight, Sakibeh and Asaad Mustafa, has children who have served our country overseas and after 9/11, one of them aided in the recovery efforts at Ground Zero. I’d like to ask them to stand, so we can show our appreciation. Thank you.

"The members of our military are men and women at arms -- battling for hearts and minds. And their greatest weapon in that fight is the strength of our American values, which have always inspired people around the world. But if we do not practice here at home what we preach abroad -- if we do not lead by example -- we undermine our soldiers. We undermine our foreign policy objectives. And we undermine our national security.

"In a different era, with different international challenges facing the country, President Kennedy’s Secretary of State, Dean Rusk, explained to Congress why it is so important for us to live up to our ideals here at home. He said, 'The United States is widely regarded as the home of democracy and the leader of the struggle for freedom, for human rights, for human dignity. We are expected to be the model.'

"We are expected to be the model. Nearly a half-century later, his words remain true. In battling our enemies, we cannot rely entirely on the courage of our soldiers or the competence of our diplomats. All of us must do our part.

"I understand the impulse to find another location for the mosque and community center. I understand the pain of those who are motivated by loss too terrible to contemplate. And there are people of every faith – including, perhaps, some in this room – who are hoping that a compromise will end the debate.

"But it won’t. The question will then become, how big should the ‘no-mosque zone’ around the World Trade Center be? There is already a mosque four blocks away. Should it too, be moved?

"This is a test of our commitment to American values. We must have the courage of our convictions. We must do what is right, not what is easy. And we must put our faith in the freedoms that have sustained our great country for more than 200 years.

"I know that many in this room are disturbed and dispirited by the debate. But it is worth keeping some perspective on the matter. The first colonial settlers came to these shores seeking religious liberty and the founding fathers wrote a constitution that guaranteed it. They made sure that in this country the government would not be permitted to choose between religions or favor one over another.

"Nonetheless, it was not so long ago that Jews and Catholics had to overcome stereotypes and build bridges to those who viewed them with suspicion and less than fully American. In 1960, many Americans feared that John F. Kennedy would impose papal law on America. But through his example, he taught us that piety to a minority religion is no obstacle to patriotism. It is a lesson that needs updating today, and it is our responsibility to accept the challenge.

"Before closing, let me just add one final thought: Imam Rauf, who is now overseas promoting America and American values, has been put under a media microscope. Each of us may strongly agree or strongly disagree with particular statements he has made. And that’s how it should be – this is New York.

"And while a few of his statements have received a lot of attention, I would like to read you something that he said that you may not have heard. At an interfaith memorial service for the martyred journalist Daniel Pearl, Imam Rauf said, ‘If to be a Jew means to say with all one's heart, mind, and soul: Shma` Yisrael, Adonai Elohenu Adonai Ehad; Hear O Israel, the Lord our God, the Lord is One, not only today I am a Jew, I have always been one. If to be a Christian is to love the Lord our God with all of my heart, mind and soul, and to love for my fellow human being what I love for myself, then not only am I a Christian, but I have always been one.'

"In that spirit, let me declare that we in New York are Jews and Christians and Muslims, and we always have been. And above all of that, we are Americans, each with an equal right to worship and pray where we choose. There is nowhere in the five boroughs that is off limits to any religion.

"By affirming that basic idea, we will honor America's values and we will keep New York the most open, diverse, tolerant, and free city in the world. Thank you."