The silver lining in the great China traffic jam

The gridlock is insane, but so is Chinese investment in high-speed rail, subways and super-cool "straddle buses" 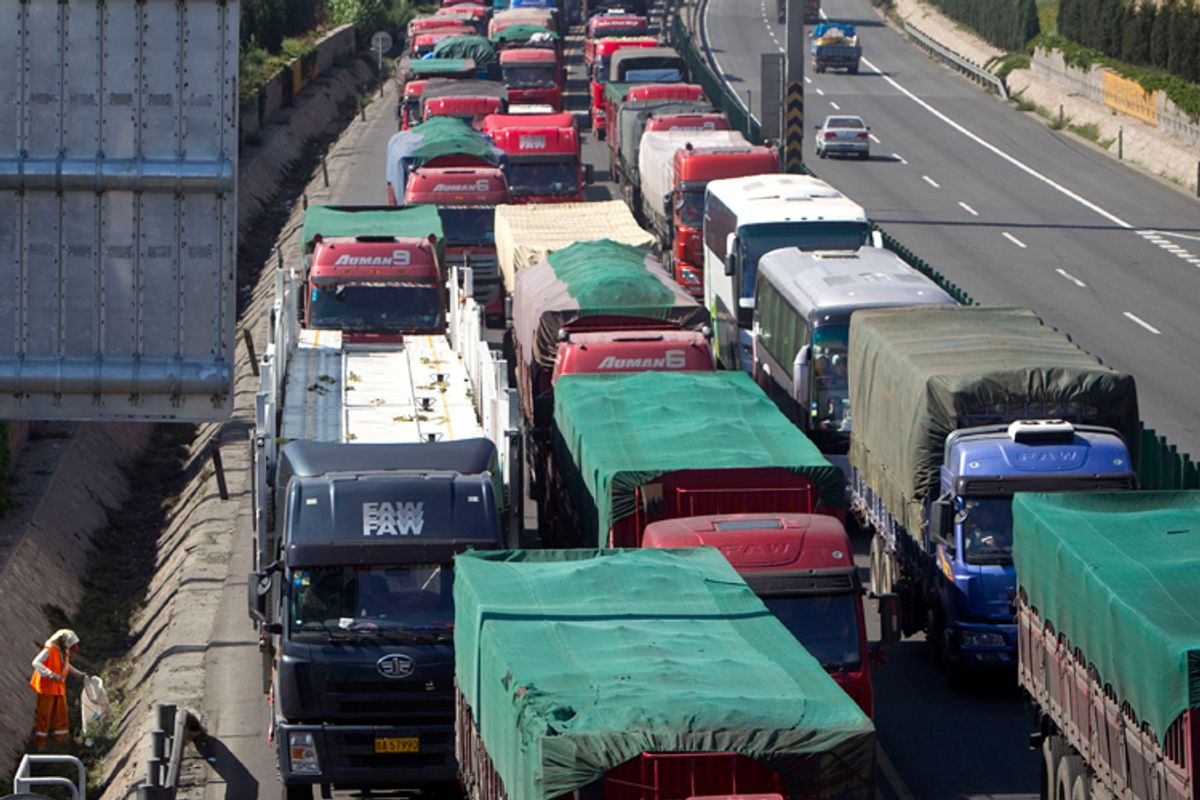 A jammed section of the Beijing-Zhangjiakou highway in Huailai, in north China's Hebei province, on Aug. 24. The massive traffic jam that stretches for dozens of miles stems from road construction in Beijing that won't be finished until the middle of next month.
--

As a metaphor for everything that is wrong with pell-mell hydrocarbon-fueled industrial development, the massive Chinese traffic jam between Beijing and eastern Tibet, stretching for at least 100 miles and possibly lasting into mid-September, is just about perfect. Trucks loaded with coal from mines in inner Mongolia are stuck, sometimes moving as slowly as a third of a mile an hour, while en route to Beijing, where residents are adding 2,000 new cars a day to the already overcrowded streets, and the air quality appears to get ever more horrible, by the day.

As part of the grand narrative that sees Chinese economic growth as an enormous environmental disaster, the China traffic jam packs a devastating punch. That endless line of trucks stuck in slow motion, laden with global-warming-igniting coal to fuel the factories pumping out China's endless quantities of manufactured goods. What could possibly be worse?

Except, you can also imagine the great Chinese traffic jam as a mere speed bump, when placed in the context of what China is actively attempting to do to address its massive transportation bottlenecks.

It will climb to $120 billion this year and exceed $700 billion over the next decade. The most ambitious focus of that investment is the expansion of China's high-speed passenger rail. Right now, China is the world's leader with 6,552 km of high-speed tracks (defined as those that can carry trains at speeds over 200 km/h). It plans to double that distance in two years.

Urban rapid transit development is even more astonishing. Fifteen years ago, Shanghai didn't have a single mile of subway lines. Today, Shanghai boasts the largest -- in terms of miles of track -- subway system in the world, bigger than New York, London, or Japan. By 2020, reports the Transport Politic, Shanghai's subway system alone "will have more rapid transit mileage than the entire country of Japan."

The Shanghai Metro is now capable of handling about five million passengers a day; the system is likely to become the world's most-used, passing Tokyo and Moscow, by the time the full construction program is complete.

Beijing is pursuing a similarly extension metro expansion project, but these cities aren't alone: twelve Chinese municipalities currently have rapid transit, nineteen more have systems under construction, and an additional seventeen new networks are in planning. The national government has committed $150 billion to the projects by 2015, though additional funds originate from the municipalities themselves, such as the progressive and independent City of Shanghai. It's a country-wide investment in urban transportation unparalleled in human history.

And then there's my favorite -- the partially solar-powered "straddle bus" that will carry passengers directly above urban highway traffic. It looks like science-fiction, but plans are in place to test a prototype in Beijing before the end of this year.

The bus, due to be tested in the coming months in the western part of the city, travels on rails and straddles two lanes of traffic, allowing cars to drive under its passenger compartment, which holds up to 1,400 people.

"We're going to start laying down test tracks along a six-kilometer (four-mile) stretch towards the end of the year," Song Youzhou, the chief executive of design firm Shenzhen Hashi Future Parking Equipment, told AFP on Tuesday.

Straddle buses, an unprecedented deployment of subway lines, more high-speed rail than the rest of the world combined; throw in staggering investment into clean and renewable energy and you can't miss the conclusion: China may be a congested mess right now, but if the future is visible anywhere, it's in the Middle Kingdom.

(The following introduction to the straddle bus is in Chinese, but if you cut to about two minutes into the video, you'll see a pretty striking animation of how the thing is supposed to work.)