Rumor has it the pop star is pretending to be Jo Calderone. Is it edgy performance art or boringly predictable? 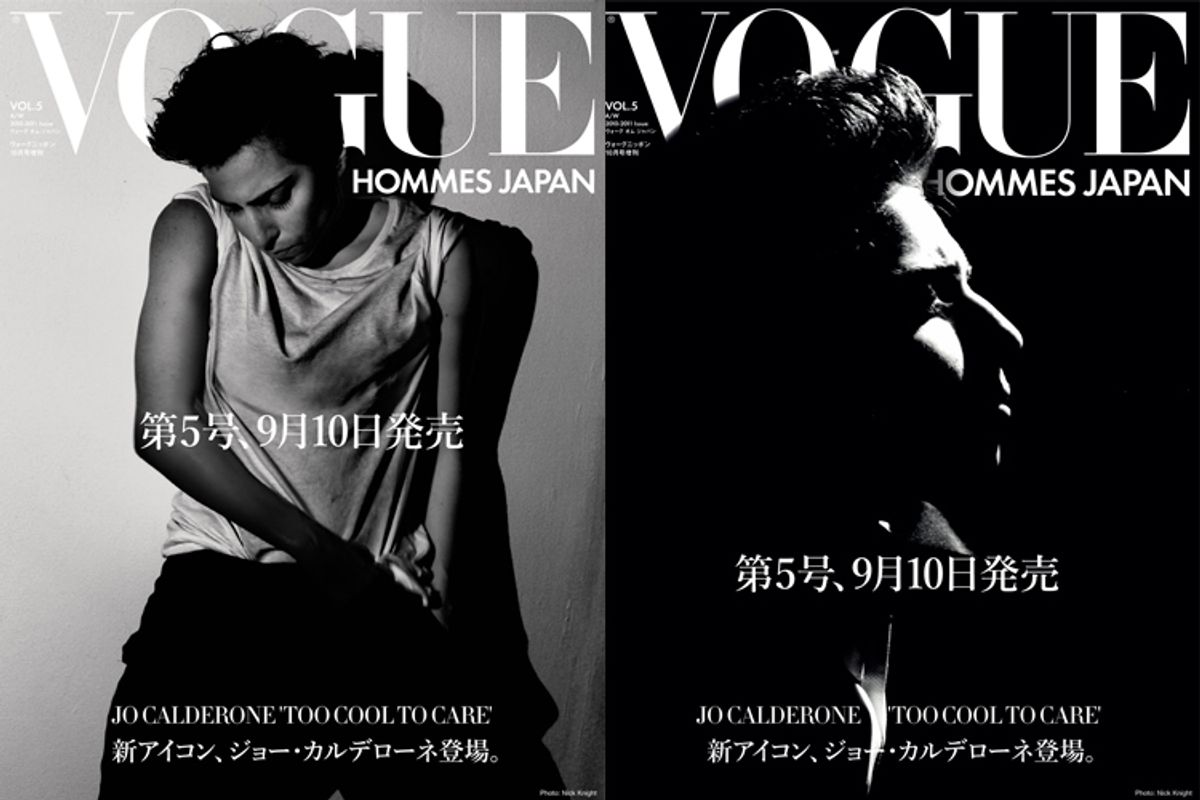 Cover images from the September issue of Japanese Men's Vogue.
--

Word on the Inter-street is that Lady Gaga is Jo Calderone. The brooding, dark-haired cover model for the September issue of Japanese Men's Vogue claims to be an Italian mechanic who met the pop star at a photo shoot, took her out to dinner, and then, well, a gentleman never kisses and tells.

But Calderone's striking resemblance to Gaga has sparked feverish speculation that the songstress has taken on a male alter ego. New York magazine collected some evidence to support the rumor: The photo shoot was done by Nick Knight, "Gaga's favorite photographer," and the cover images were published today on the blog of Gaga's stylist, Nicola Formichetti. Also: Calderone's Twitter feed is "clogged with interactions with Gaga's favorite arm barnacle, Perez Hilton." I can't say with utter certainty that Gaga is Calderone (I'm 100 percent certain, however, that Perez Hilton's name should always be preceded by the phrase "arm barnacle"), but the case is strong.

This is just the type of stunt one should expect from the envelope-pushing singer. Just a couple of months ago, the music video for "Alejandro" featured gender-fluid men and a seemingly sexless Gaga engaged in S/M play. Last August, Salon's Mary Elizabeth Williams wrote in response to the mostly debunked rumors that Gaga had a penis, she is "en route to becoming one of pop’s great gender benders." A year later, lo and behold, the buzz is that the singer is pretending to be a dude. Over time, her look has evolved from drag queen to androgynous to drag king, and her self-described sexuality has slid from straight to gay to bi to ... abstinent.

I generally celebrate the blurring of gender lines and the subversion of traditional sex roles, but this is painfully predictable. I prefer my performance art with a bit more subtlety and suspense. Some of us -- even those who drunkenly berate the DJ with "Gaga! Gaga! Play some Gaga!" -- are experiencing a little Gaga fatigue. My colleague Thomas Rogers put this burnout in particularly depressing terms: "It makes me feel sad, like the summer is over, so we now need to listen to respectable music, like the National, or awful things like Daughtry."