A string of coordinated attacks hit the country a day after U.S. troop levels drop below 50,000 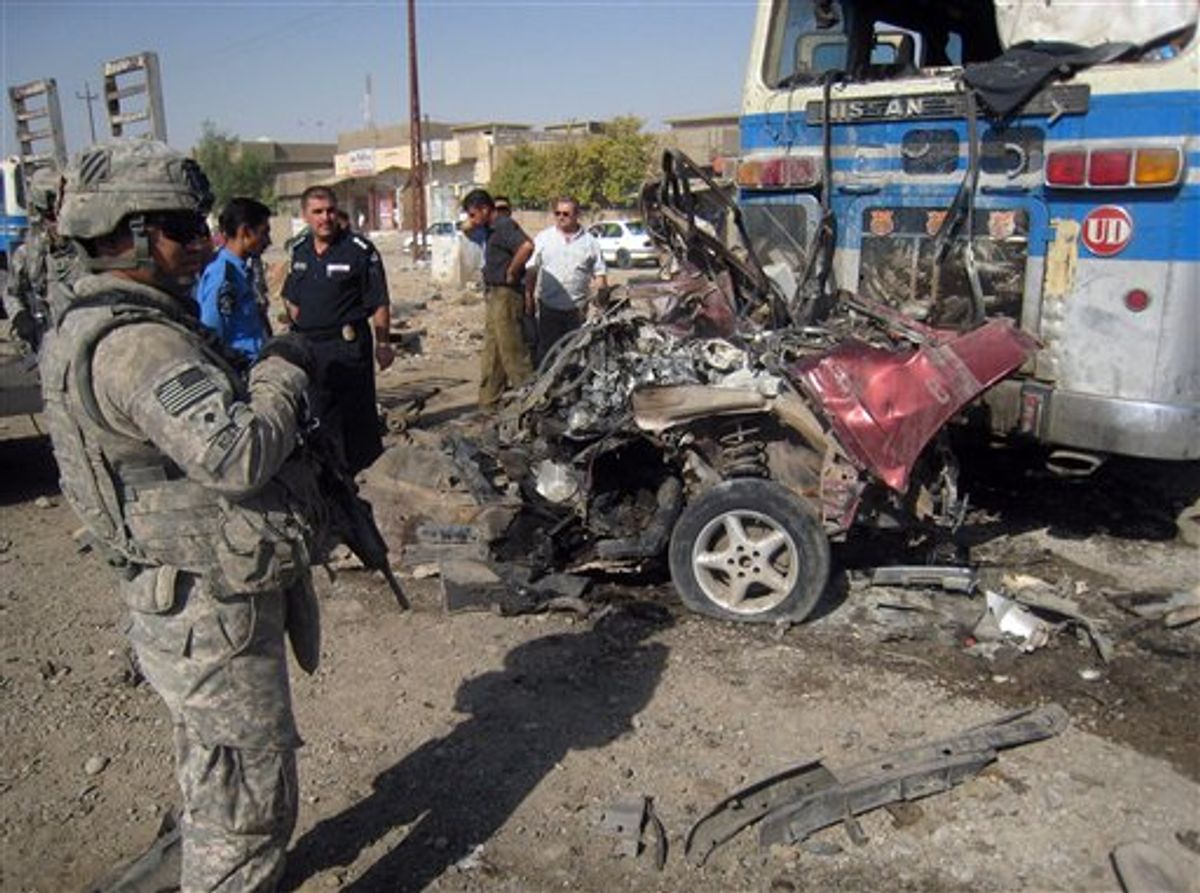 A U.S. Army soldier and Iraqi police stand at the site of a bombing in Kirkuk, 290 kilometers (180 miles) north of Baghdad, Iraq, Wednesday, Aug. 25, 2010. A string of attacks targeting Iraqi security forces on Wednesday left several people dead and scores wounded, police and hospital officials said the day after the number of American soldiers in the country fell bellow 50,000.(AP Photo/Emad Matti) (AP)
--

Bombers and gunmen launched an apparently coordinated string of attacks against Iraqi government forces on Wednesday, killing at least 50 people a day after the number of U.S. troops fell below 50,000 for the first time since the start of the war.

Insurgents have been stepping up their attacks on Iraq's security forces in recent months as the U.S. has trimmed its military presence in the country. More than half of those killed Wednesday -- 27 -- were Iraqi soldiers and policemen.

There were no claims of responsibility for the spate of attacks. But their scale and reach, from one end of the country to the other, underscored insurgent efforts to prove their might against security forces and political leaders who are charged with the day-to-day running and stability of Iraq.

The deadliest attack came in Kut, 100 miles (160 kilometers) southeast of Baghdad, where a suicide bomber blew up a car inside a security barrier between a police station and the provincial government's headquarters. Police and hospital officials said 19 people were killed, all but one of them policemen. An estimated 90 people were wounded.

"I rushed to the scene to help evacuate the people, and saw body parts and hands scattered on the ground and dead bodies of policemen," said government employee Yahya al-Shimari. "I also saw a traffic policeman lying dead on the ground. There were about 15 cars that were burnt."

A similar attack struck a north Baghdad neighborhood, where a suicide bomber detonated a car bomb in a parking lot behind a police station.

Fifteen people were killed in that attack, including six policemen. Police and hospital officials said another 58 were wounded in the explosion that left a crater three yards (meters) wide and trapped people beneath the rubble of felled houses nearby.

Five others, including an Iraqi soldier and a police officer, were killed in small bursts of violence in Baghdad.

A senior Iraqi intelligence official raised the possibility that some of the attackers had inside help. The official, who spoke on condition of anonymity because he was not authorized to talk to the media, said the Baghdad suicide bombing bore the hallmarks of al-Qaida, but said unnamed political factions helped coordinate some of the other attacks. He refused to elaborate.

Since Iraq's March 7 elections failed to produce a clear winner, U.S. officials have feared that competing political factions could stir up widespread violence. Iraqi leaders so far have tried to end the political impasse peacefully.

Iraqi Foreign Minister Hoshyar Zebari said the stalled government, combined with the American troop withdrawal, created ideal conditions for insurgents to attack. Even so, he said the security situation was "under control."

"Here you have a government paralysis, you have a political vacuum ... you have the U.S. troop withdrawal," Zebari told The Associated Press. "And in such environment these terrorist networks flourish actually and would love to deepen divisions among Iraqi politicians to apportion blame on each other in order to create as much chaos as possible."

But U.S. and Iraqi officials alike acknowledge growing frustration throughout the nation, nearly six months after the vote, and say that politically motivated violence could undo security gains made over the past few years.

"What is going on in the country?" said Abu Mohammed, an eyewitness to a car bombing near Baghdad's Adan Square that killed two passers-by. "Where is the protection, where are the security troops?"

Still, some security forces proved to be on guard. Police in the northern city of Mosul said Iraqi soldiers shot and killed a suicide bomber Wednesday afternoon as he sought to blow up his car outside an army base.

From the northern Iraqi city of Kirkuk to the holy Shiite shrine town of Karbala, scattered bombings killed and wounded scores more. They included:

--A local council building in Muqdadiyah, north of the capital, was hit with a car bomb. Three people were killed and 18 wounded, said Diyala police spokesman Maj. Ghalib al-Karkhi.

--In the former insurgent stronghold of Fallujah, police said a soldier was killed and 10 people wounded when a suicide bomber rammed his car into an Iraqi army convoy.

--Car bombs in Kirkuk, Iskandariyah, Dujail and Mosul killed six and wounded 29. A roadside bomb in Tikrit, Saddam Hussein's hometown, killed a policeman on patrol and wounded another.

--A car bomb near police station in Karbala wounded 28 people but no fatalities were immediately reported. Two people in the southern port city of Basra were also injured by a car bomb.

While violence has subsided significantly since the height of the sectarian bloodshed in 2006 and 2007, militants continue to target members of Iraq's nascent security forces, undermining their ability to defend the country as the U.S. ends combat operations.