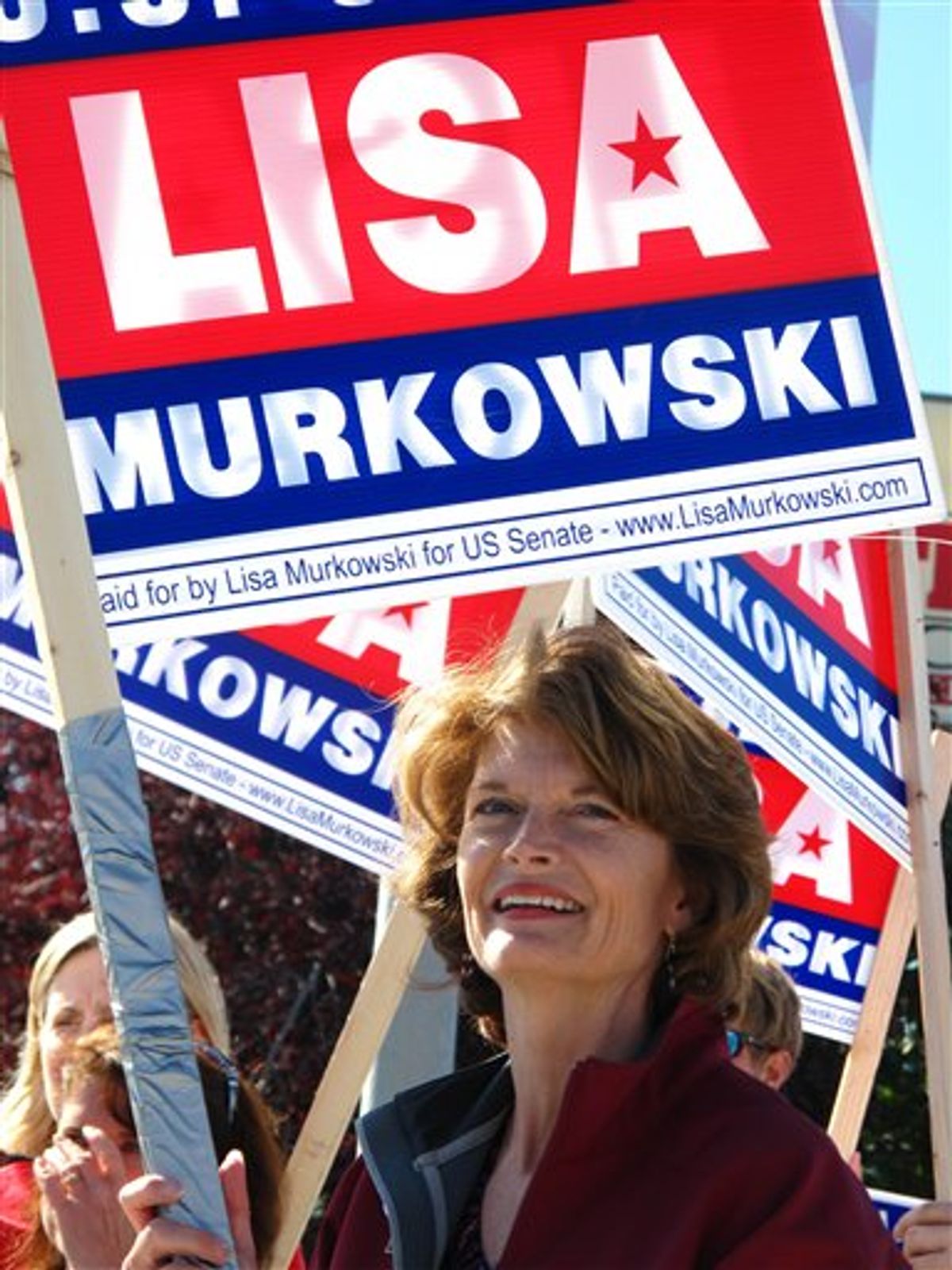 U.S. Sen. Lisa Murkowski, R-Alaska, right, joins volunteers to wave to motorists on Monday, Aug. 23, 2010, in Anchorage, Alaska. Candidates are pulling no punches in their last minute push for voters in Tuesday's primary. The greatest proof of this is in the U.S. Senate race where Sarah Palin has re emerged months after first endorsing GOP challenger Joe Miller to urge Alaskans to support him and to oust Murkowski. Murkowski's not shying away, running a new radio spot of her own, called "Truth," in which she uses audio from a talk show host's tirade against Miller to show Miller as distorting her record. (AP Photo/Mark Thiessen) (AP)
--

Of all the states to hold primaries yesterday, Alaska was the last to count its ballots, leading most people to go to bed before seeing any results. You can't blame them: The GOP Senate primary race between Lisa Murkowski and Joe Miller, a little-known Tea Party-backed challenger, was supposed to be a cakewalk for the incumbent.

It now appears that the underfunded Miller may have actually toppled Murkowki in what would be the most stunning upset of this entire election cycle. While complete results will take weeks to compile as some remote Alaska communities and villages release their numbers and outstanding absentees and provisional ballots are tabulated, Murkowski will have a difficult time overcoming Miller’s current lead, which stood at more than 2,000 votes with about 98% of precincts reporting.

A Miller win would be a fascinating development, touching on a host of themes, including the role of the Tea Party, the end of a political dynasty in Alaska just weeks after the passing of former Sen. Ted Stevens, and the future direction of a U.S. Senate, which with Miller would acquire another strident ideologue in 2011. Perhaps most salient, while Miller’s candidacy was propped up by support from Sarah Palin, his win would have much more to do with Alaska’s strong conservative bent and the inherent weakness of the Murkowski brand than with Palin’s waning influence in her state.

Miller’s candidacy was given no chance. Murkowski, who was appointed to the seat by her father (then-Governor Frank Murkowski) in 2003 and who survived a nepotism backlash to win a full term in 2004, outspent her challenger 20-to-1 and enjoyed a huge advantage on name recognition. Palin’s early support of Miller did help him on the map and the Tea Party Express’s expenditure of over $500,000 attacking Murkowski buoyed Miller, but he was still considered a prohibitive longshot heading into Tuesday's vote. (This perception was fed by the very limited amount of independent polling during the primary campaign.)

But maybe we should have seen it coming. After all, if ever an incumbent could face primary trouble, it would be someone like Murkowski, who has long possessed underlying weakness with Alaska voters -- and it would be in a year like this, when Republicans nationally have already ousted several incumbents seen as insufficiently conservative.

In fact, popular resentment of Murkowski's appointment to the Senate never really went away. She only survived in '04 because of the state’s strong conservatism and the presence of the toxic John Kerry at the top of the ballot, and it was a key cause of Frank Murkowski’s defeat in 2006 at the hands of Palin, who campaigned against the "old boy’s network" epitomized by the elder Murkowski.

But the media failed to grasp the significance of this. After Sen. Ted Stevens was defeated in 2008, Murkowski was portrated as Alaska’s most popular politician and the state’s new breadwinner in Washington, supposedly making her immune to a stiff challenge in 2010. This was accepted as the conventional wisdom even as the prevailing winds claimed her Republican colleague Sen. Bob Bennett of Utah and Rep. Bob Inglis of South Carolina, both of whom were felled by primary foes who challenged their conservative credentials.

Ultimately, it was precisely these winds that led to Tuesday's startling result. An early July poll found that just 53% of Republicans had a favorable view of Murkowski -- a strikingly low number given Murkowski’s position in the state.

Palin backed Miller early on after she and other higher-profile Republicans took a pass on the race. Palin’s antipathy toward the Murkowski family dates back to her first run for governor, and she has taken assorted shots at the senator over the years. That a spurned top former Palin aide was Murkowski’s campaign manager only increased Palin’s interest in the contest.

Nonetheless, despite aiding Miller, Palin’s endorsement likely didn't win him the race. Since leaving Juneau mid-term to begin her career as a poli-celebrity, various polls have shown Palin’s popularity in the state plummeting, with a recent survey finding that 46% of Alaskans have a negative opinion of her, versus 41% who view her positively. Because the track record of Palin’s endorsed candidates has been decidedly mixed this cycle, Palin will latch onto Miller like a barnacle and do all she can to take credit for his apparent upset.

Much more relevant is the fact that Alaska is one of the nation’s most conservative states -- while Murkowski has long been a quiet centrist. And with the extreme GOP base reinvigorated, it finally caught up to her.  Alaska is a state particularly suited to a Tea Party surge, given its libertarian underpinnings, and combined with Murkowski’s baggage, this campaign provided an ideal opening for arch-conservatives to flex their muscles.

Miller may have been a complete unknown to voters, but it didn’t matter; he was running in the perfect year against the perfect foil. Sarah Palin helped, but the broader environment helped more. Nevertheless, because of the media’s obsession with Palin, and her own insatiable appetite for publicity, expect Palin to receive the lion’s share of attention in the coming days.

Regardless of how it came about, a Miller victory will have far-reaching implications in the Last Frontier and beyond. In Alaska, this election, coming so soon after Ted Stevens death, is a symbol of changing times. While she never enjoyed Stevens’ power or gravitas, Murkowski’s approach to office was the same, as she sought to bring home as much pork as possible from her perch as ranking Republican on the Energy Committee. Miller will represent a new breed, focused more on ideology and less on delivering money to the needy state.

If he prevails in the primary, you can expect Miller to win easily in November and head to the Senate. There, he will join a growing roster of insurgent ultra-conservatives, possibly including Sharron Angle in Nevada, Ken Buck in Colorado, Rand Paul in Kentucky, Marco Rubio in Florida, Mike Lee in Utah, and Pat Toomey in Pennsylvania -- not to mention Sens. Jim DeMint and Tom Coburn, who would see their influence in the chamber expand with a batch of Tea Party-fueled additions. Come January, a newer, more partisan Republican Party could be on display in the Senate, with Miller as one of its prime spokesmen. It may be hard to believe, but the Senate will become far more heated, bitter, and unproductive.

While it may be weeks until it is officially certified, Miller’s apparent victory is the biggest political earthquake to hit this year -- so far.