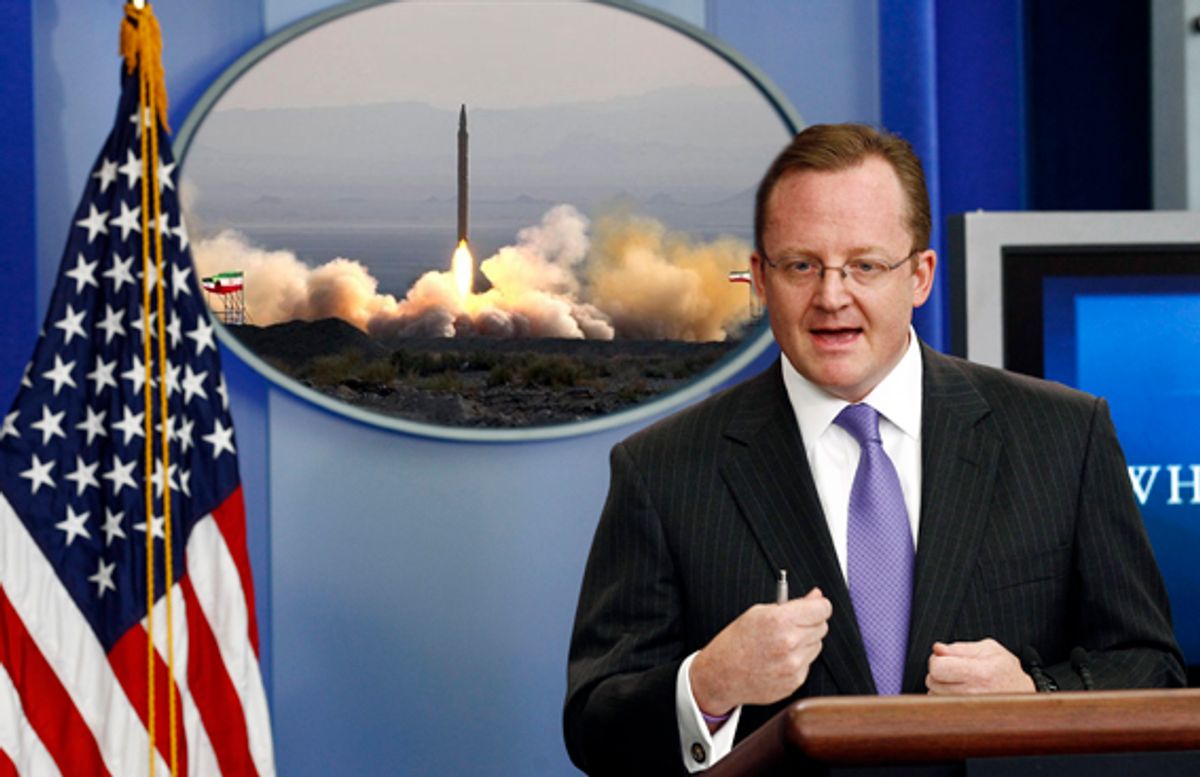 It is the summer of 2010, and despite some dramatic developments, the almost decade-old Iranian nuclear crisis seems stuck in a predictable rut. The United Nations Security Council has levied yet another round of sanctions and the United States and the European Union have added even tougher measures on their own, but Iran continues to push ahead with nuclear work that raises fears it seeks the bomb. Will anything ever change?

Then, into this discomforting world of same-old, same-old comes a blockbuster article in The Atlantic that lays out the logic for an Israeli attack against Iran. It even sets a deadline. Jeffrey Goldberg writes that Israel’s "period of forbearance, in which (Israeli Prime Minister) Netanyahu waits to see if the West’s nonmilitary methods can stop Iran, will come to an end this December."

What interests me in this is not so much the debate over how to rein in Iran's atomic ambitions, but the way in which the Obama administration uses the media to keep its policy on-track. The medium is the message and in policy matters the message, how things are perceived, is substance. The Goldberg article sounded drums of war which the White House wanted both to use and to muffle at the same time.

Barack Obama came to the presidency pledging to engage Iran in talks, an openness to negotiation that his predecessor George W. Bush lacked. This played out in 2009 and resulted in -- no talks. So, 2010 marks the beginning of a new phase, one of pressuring Iran with sanctions. But what next if sanctions don’t work?

Goldberg’s article reminds us that the gorilla at the table is a potential Israeli or U.S. attack on Iran. Does the administration want to downplay this? Somewhat, of course. But Obama’s people do want to make clear that force is an option, because, as U.S. officials say, a threat is often more effective than the actual action. There is no endgame without the menace of an attack, even if President Obama may be set against bombing Iran due to all the feared unintended consequences. The threat must still be there. The administration has laid the groundwork for this with both the president and Secretary of State Hillary Clinton repeating that it would not be acceptable for Iran to get a nuclear weapon. U.S. officials have also been saying that containment -- that is, living with an Iranian atomic bomb -- is not an option. The point is made that the dynamics in the Middle East of today are so much more volatile than was the Cold War nuclear balance between the United States and the Soviet Union. Each superpower had a well-funded system of command-and-control and more time to react than would states in the smaller and less developed Middle East.

This would seem to leave military action as the ultimate and inevitable resort to keep Iran from getting the bomb. But none of this has been decided, not in Washington and not in Jerusalem. What is important is that the threat be on the table without actually being a threat. White House Chief of Staff Rahm Emanuel and " several National Security Council officials" clearly tried to make just this point in the Goldberg piece. When Goldberg said people doubt that  "Obama would open up a third front in the greater Middle East," he quoted one of the officials answering: "What have we done that would allow you to think that a nuclear Iran would represent a tolerable situation?"

This is keeping the threat in play. But remember, it can not actually be a threat because that would torpedo negotiations. And this is how we get a New York Times article following on the Goldberg piece in which U.S. officials insist that the Iranian situation has not reached a critical point. They say Iran is having trouble making the fuel needed for a bomb. Iran, say the officials, is still relatively far away from the break-out point of taking enriched uranium fuel and using it to assemble a weapon. As the Times explained: "The Obama administration … has persuaded Israel that it would take roughly a year, and perhaps longer, for Iran to complete what one senior official called a ‘dash’ for a nuclear weapon." The excesses of the Goldberg piece are now trimmed. Time is left for diplomacy.

What has the administration done with all this spin? It has kept the military option alive, hopefully worrying the Iranians, but also kept the threat theoretical and under control. It makes you wonder: Are these stories really about policy -- or are they the policy itself?

Michael Adler is a Public Policy Scholar at the Woodrow Wilson International Center for Scholars, writing a book on the diplomacy in the Iranian nuclear crisis.