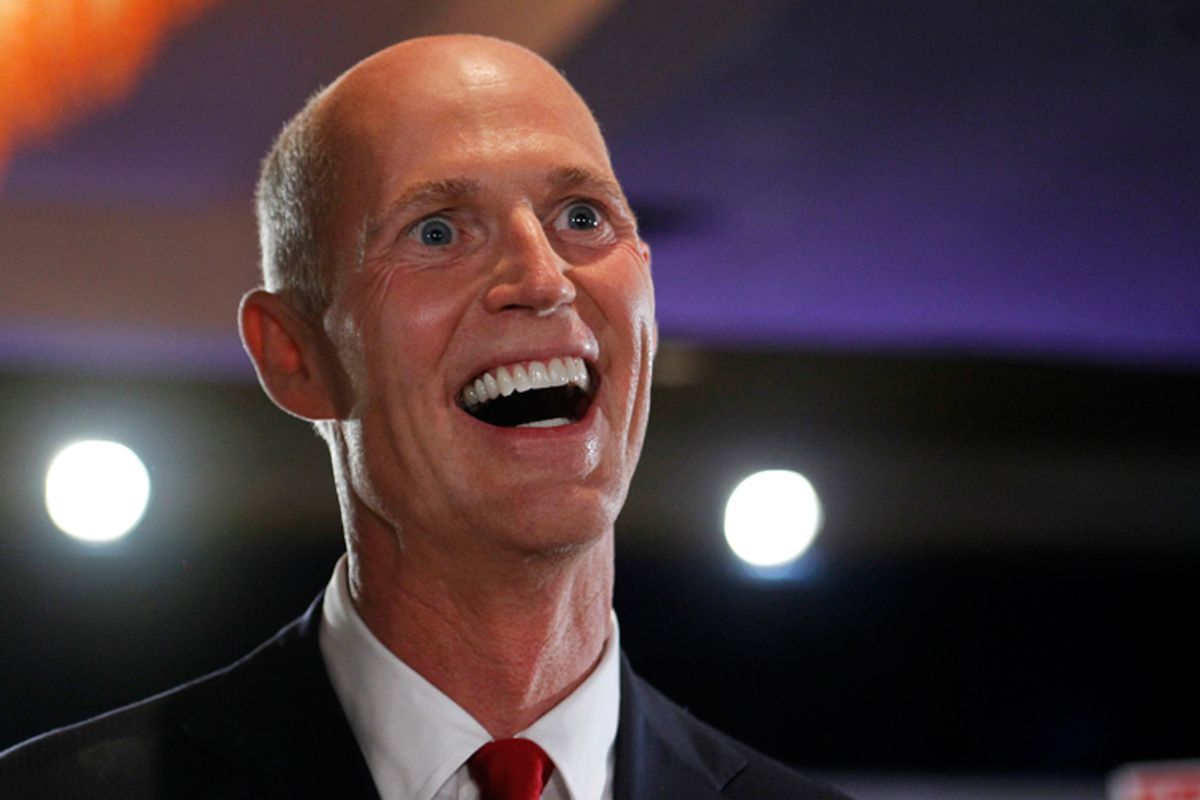 Now that Rick Scott is the Republican gubernatorial nominee in Florida, perhaps voters there will start to ask the same question posed by reporters during the primary: Why won't he disclose the secret legal settlements between his corporate medical clinic chain and a dozen or so former employees?

Questions about Solantic, the Scott company that operates a string of for-profit clinics across the Sunshine State, were first raised in a two-part series by reporter Tristram Korten that Salon published last fall (with the cooperation of the Investigative Fund). At the time, Scott had not yet declared his candidacy for governor but was spending millions of dollars to spearhead a national advertising campaign against President Obama’s healthcare reform initiative.

What Korten found -- aside from Scott’s notorious $300 million engorgement from Columbia/HCA, the crooked hospital chain he once ran -- was a series of lawsuits charging Solantic with employment discrimination, wrongful death and other abuses. Among those who sued the company was its first regional medical director, Dr. David Yarian, who complained that Scott’s obsession with hiring only “mainstream” employees was not only discriminatory but prevented him from employing the most qualified applicants, a serious problem in staffing health clinics. That complaint led to the medical director’s dismissal, followed by a legal confrontation and eventually a settlement of his severance claim.

But the Yarian case was only the beginning. Dozens of employees told Korten that Scott’s chain discriminated on the basis of race, age and weight. Qualified applicants were often rejected by Solantic managers, apparently because they were black or Hispanic, over a certain age or simply too “hefty,” the adjective applied to a woman who had recently given birth.

Seven women filed suit together against the company in July 2006, which resulted in a settlement for an undisclosed sum in May 2007. The terms of the settlement gagged all of the plaintiffs, who declined to speak with Salon.

Those lawsuits against Solantic -- as well as more recent litigation by two doctors accusing the company of fraudulently misusing his medical license -- returned to haunt Scott in the final weeks of the primary campaign. He held a furious press conference on Aug. 10 in Tallahassee, where he claimed that his opponent, Florida Attorney General Bill McCollum, had commenced a “harassing” investigation of the company’s checkered legal history.

But Scott could not deny that less than a week before he announced his candidacy for governor, he had been deposed in a lawsuit brought by a former Solantic doctor who alleged that the company had used his medical license to file false information with Florida authorites. Again, the company settled that lawsuit on terms prohibiting the parties from discussing it publicly, within a few weeks after Scott commenced his campaign.

During the final month of the primary race, Florida reporters learned that another doctor had made a similar accusation about phony licensing, and that an attorney had filed yet another action against the company.

While charges of racial and age discrimination in a state like Florida can be politically devastating, the claim that Scott’s firm engaged in fraud was at last as embarrassing to him because it might remind voters about the billion-dollar Medicare fraud perpetrated by Columbia/HCA when he headed that company.

Scott and Solantic have repeatedly refused to release any of the settlement agreements, depositions, or any other information they can conceal behind a wall of confidentiality. The McCollum campaign tried to highlight that public stonewall with a blistering description of Scott as “the disgraced former CEO of Columbia/HCA who is inseparably associated with one of the most massive Medicare fraud schemes in American history, [and who] now refuses to answer questions about alarming new revelations about his current company Solantic.” Scott narrowly won the primary anyway -- but those questions still linger.