Why our agricultural empire will fall 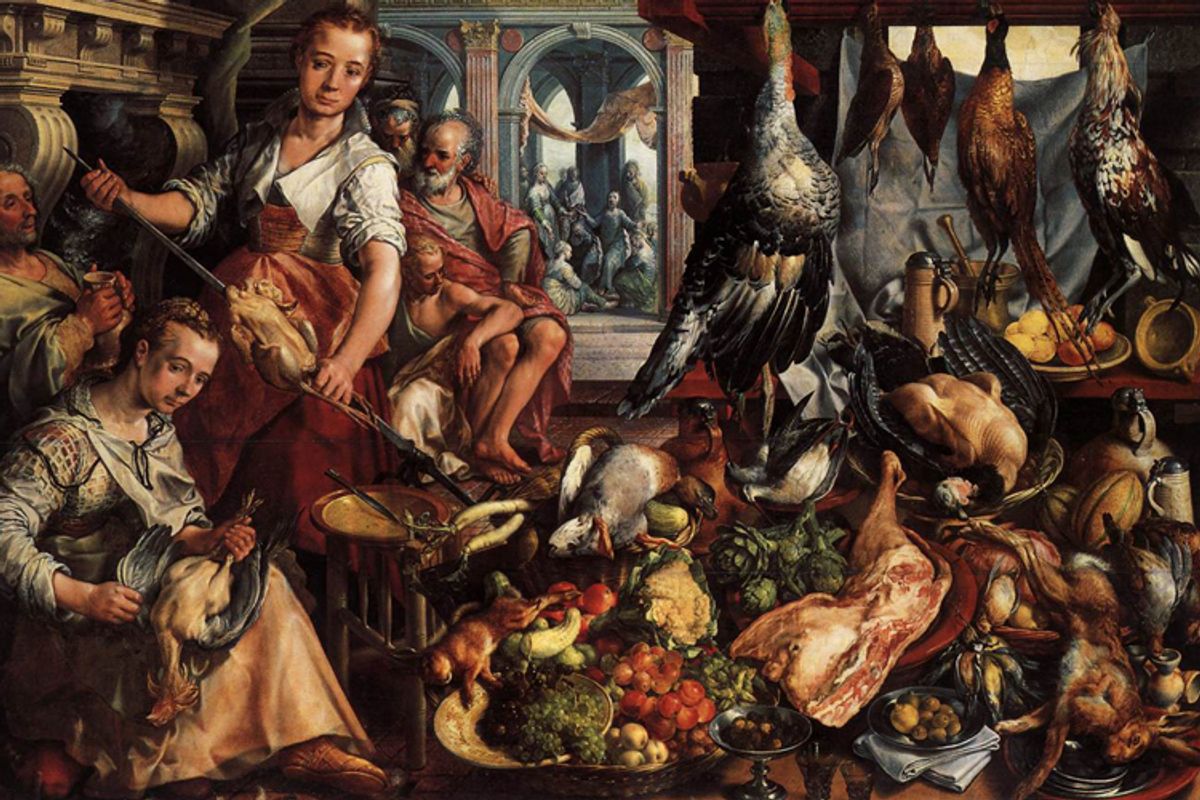 "The Well-Stocked Kitchen" by Joachim Beuckelaer
--

In an age of super-sized meals and obesity epidemics, food-shortage doomsday scenarios always seem a little surreal. Backed by half a century of agricultural abundance, it's easy to imagine that cheap food will permanently abound. But in a new book, "Empires of Food," academic Evan Fraser and journalist Andrew Rimas show us that we are not the first advanced civilization to have a hubristic, misplaced confidence that we'll always be fed.

By tracing the rise and fall of a number of preindustrial empires, the authors show us just how much trouble we're in. The Romans, the Mesopotamians and the medieval Europeans, for example, all had agricultural systems that, much like ours, were yoked to complex technology and highly specialized trade networks. And each of those societies eventually failed because they hadn't accounted for soil erosion, growing overpopulation and weather changes. Climate change, anyone?

Fraser and Rimas propose no easy solutions, advocating instead that we learn to store surplus food, live locally, farm organically and diversify our crops.

Salon spoke to Evan Fraser over the phone about agricultural patterns through history, the instability of our food system, and whether the solutions he proposes are ultimately unaffordable for the world's poor.

Your book focuses on how food can cause empires to rise and fall, and specifically, how this is an almost cyclical process that has been repeated through history.

A society has to go through the same steps to grow. For example, all complex societies have people living in cities who rely on country folk to produce their food. They have to transport the food over large distances, and they begin to use food as a tradable commodity. But usually this happens during a time of good weather. So the Romans, for example, grew because they specialized in wheat, but things got colder around 300 A.D., and the empire collapsed. The same thing happened with medieval Europe. In the 14th century, the medieval warm period ended, and there were huge famines.

In our case, we won't face a cooling, but either end of the thermometer is problematic for a farmer. As a global society, we've come to depend on food production that is largely reliant on good weather conditions and good soil. But with climate change, good weather will be a thing of the past and production failures will become common. This is my biggest concern.

You mentioned Europe in the medieval period. What else do we have in common with their food system at the time?

Structurally, our system looks a lot like the European system in 1300, just before the crises of the 14th century. In medieval Europe, monasteries were the centers of food production. As the population increased, the monks tried to increase the amount of grain produced by cutting down forests and expanding into the hills. This was a short-term solution because cutting down trees only loosens the topsoil. The medieval warm period ended around 1300 A.D. In 1315, Europe was faced with a bunch of bad late-summer storms. The wind and the rain caused the topsoil to wash away, and crops failed. There were widespread famines, and Europe lost some 20 percent of its population. Years of bad harvests and poor productivity followed, which in turn led to political upheavals, riots, anti-Semitism and hunger. They were also probably very weak. So when a new disease called the Black Death appeared in 1347, it wiped out another 30 percent of the population.

Interestingly, one of the first signs that things were about to go wrong in the medieval period was that food prices started rising. It happened with the Romans too. Demand began going up, and yields stagnated. We have a strong parallel with that today. Between 2006 and 2008, we had a threefold rise in the price of food. The price of wheat has risen faster in the last six months than at any time in the last 32 years. From 1950 to 2000, the price of food decreased every year, but since 2000, it's been increasing. Our system looks a lot like Rome in the year 250.

There are obviously several factors that can cause a food system to fail. You mentioned climate change earlier, but what else worries you?

All the safeguards against crop failures we've come up with in the last 50 years are fossil-fuel-intensive -- chemical fertilizers, irrigation systems and dams all take energy to produce. With oil prices set to rise in the future, these solutions will become increasingly more expensive.

Further, in order to maximize yields, we've started specializing our crops. So we grow the same crop over and over again on the same piece of land. This strips the soil really quickly of nutrients. It's a very efficient system, but history shows us that these crops are very water- and nitrogen-intensive.

What this means is that our system is already very brittle and fragile. Climate change, which we know will happen, will only weaken an already weak system.

In your book you also talk about the Mesopotamians and Sumerians who lived in the Fertile Crescent more than 2,500 years ago. It's amazing to think that our food system is as vulnerable as theirs once was.

Much like the Romans, the Mesopotamians grew into an extremely developed culture because their farmers produced excess food, stored it, transported it and exchanged it in the urban marketplace. They developed cities by creating irrigation canals, which allowed them to have high yields. But they made the same mistakes that we are making today: They relied heavily on food produced during good weather and they overspecialized their farms. One of the problems with irrigation is that it leaves behind a deposit of salt when the water evaporates. Over the years, the soil becomes salinized. The Mesopotamians had a sudden hot, dry spell that they countered with irrigating the soil even more heavily. This created a short-term yield boost, but in the long term, it was unsustainable. So eventually, yields dropped, the economy faltered, tax revenues dropped, and the military weakened. When other powers came up in the region, they weren't able to defend themselves.

The modern parallel with this, of course, is in our usage of chemical fertilizers. It has allowed us to boost our yield temporarily, but the underlying problem of soil erosion hasn't been fixed.

Some people argue that our ability to use fertilizers and pesticides has actually helped the environment, because we use less land to produce the same amount of crop. But you are suggesting that we wean ourselves off fertilizers and produce food locally.

Well, I think too much of anything is a bad thing. For instance, northern England is excellent as a grazing pasture, but it can't really sustain crops. So if its residents were to survive only on locally grown produce grown without fertilizers, they would manage to do it for exactly three years before the soil would start to erode. So it's obviously not practical. Yet, we've taken the idea of specialization and gone too far with it. We've become greedy.

What about the possibility that technology might get us out of this mess? What do you think about the cloned cows in England that produce more milk than regular cows? Won't they actually be beneficial for the environment because we will need fewer cows to produce the same amount of milk?

The high-productivity cow may produce more milk, but it will need more water, protein and energy than a regular cow. That energy has to come from somewhere. So these highly productive strains of animals and plants are actually a bit of an illusion.

It's the same reason that droughts have become increasingly difficult to manage. We now plant these highly productive varieties of wheat everywhere, but they actually require a lot more water. So now even a small drought creates extreme food shortage.

But we could be in a more tenable situation if we used technology differently. So for example, if, instead of creating high-yielding varieties of crops, we created drought-resistant varieties, we'd be better prepared for the future.

One of the things you suggested we needed to change to live more sustainably is the way we price our foods. You say we need to price our foods so that they reflect the real price of producing them, free of government subsidies. But isn't that eventually unaffordable for the poor?

One of the problems with the way we produce food right now is there are all sorts of hidden social and environmental costs. If pork chops included the price of water pollution and the cost of pollution caused by pig manure, we'd be paying a lot more for them and wouldn't eat as many. Hothouse vegetables, for instance, have a huge energy subsidy, while chocolates, coffee and tea have a social subsidy in the form of poor wages paid to producers, and livestock production has a huge environmental subsidy in the form of waste management.

But as you pointed out, this hurts the poor consumer.

Often, though, a poor consumer in the developing world is also a food producer. So if we began paying fair wages, they would earn more and as a result be able to pay more for their food. The real problem, then, is how this would affect the urban poor. So what we need to do -- if we decide to change our pricing policy -- is to focus on poverty reduction in urban areas.

But this doesn't mean that we shouldn't let affluent consumers in the Western world pay the real price for what they consume.

In the U.S., we've seen a huge shift in the way people see food. The foodie movement means that food has become a sensory pleasure — a luxury instead of a necessity. But the solutions you suggest indirectly involve our going back to seeing food as mainly a means of sustenance.

There is a really interesting tension at play here. In order for us to produce food locally or use fewer fertilizers or pay better wages, we need people to be more interested in what they're eating and where it's coming from. But in the West, this has turned food into a fashion item. Instead, we need them to be invested in food without trivializing it or turning it into a trend. We need to think about unsexy but ultimately more practical solutions, like food storage and maintaining food capacity, if we want to protect ourselves for the future.