Does Mehlman deserve our understanding?

Ex-RNC chairman out of the closet now, but hasn't clearly split with anti-gay agenda the GOP ramped up on his watch 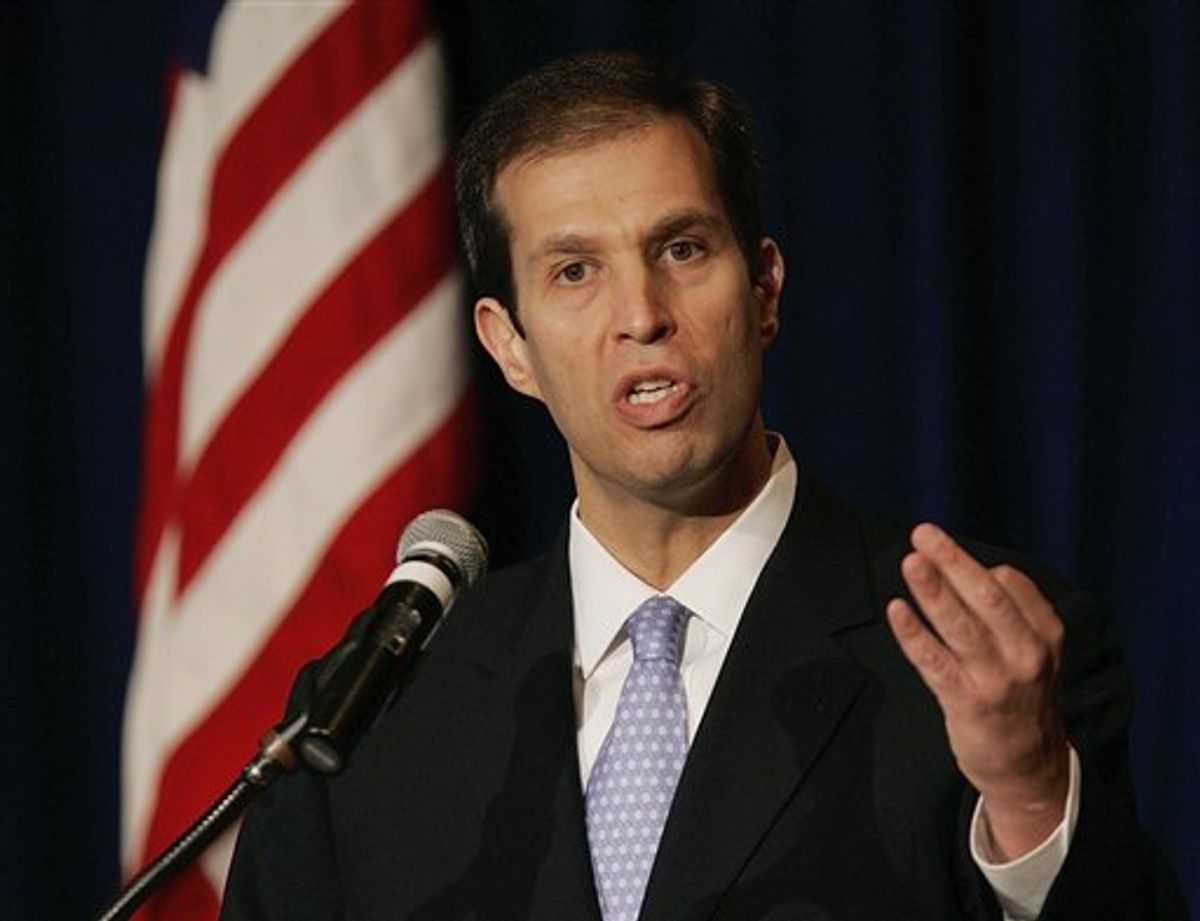 FILE - In this May 4, 2006, file photo, Ken Mehlman, then-chairman of the Republican National Committee, addresses the RNC state chairmen's meeting in Colorado Springs, Colo. Mehlman says in a magazine interview that he is gay. Mehlman, who was campaign manager for President George W. Bush in 2004, told The Atlantic that he came to the conclusion he is gay recently and wanted to talk about it publicly because he wants to become an advocate for gay marriage. (AP Photo/Ed Andrieski, File) (AP)
--

Sometimes, those stereotypes turn out to be true. Namely, that the more homophobic a man is, the more likely he is to be conflicted about his own sexuality. A secure man, the story says, doesn't care what gay men do in their bedrooms.

Unless he's the chairman of the Republican National Committee.

Ken Mehlman, President Bush's campaign manager in 2004 and a former chairman of the Republican National Committee, has told family and associates that he is gay.

Mehlman arrived at this conclusion about his identity fairly recently, he said in an interview. He agreed to answer a reporter's questions, he said, because, now in private life, he wants to become an advocate for gay marriage and anticipated that questions would arise about his participation in a late-September fundraiser for the American Foundation for Equal Rights (AFER), the group that supported the legal challenge to California's ballot initiative against gay marriage, Proposition 8.

I do want to say, now, that I admire Mr. Mehlman for finally coming out of the closet and claiming his gay identity. While most of my gay and lesbian friends came out in their teens, some did not acknowledge their sexuality until they were in the 40s.

But they weren't chairmen of the Republican National Commitee.

Mehlman's leadership positions in the GOP came at a time when the party was stepping up its anti-gay activities -- such as the distribution in West Virginia in 2006 of literature linking homosexuality to atheism, or the less-than-subtle, coded language in the party's platform ("Attempts to redefine marriage in a single state or city could have serious consequences throughout the country..."). Mehlman said at the time that he could not, as an individual Republican, go against the party consensus. He was aware that Karl Rove, President Bush's chief strategic adviser, had been working with Republicans to make sure that anti-gay initiatives and referenda would appear on November ballots in 2004 and 2006 to help Republicans.

Mehlman acknowledges that if he had publicly declared his sexuality sooner, he might have played a role in keeping the party from pushing an anti-gay agenda.

"It's a legitimate question and one I understand," Mehlman said. "I can't change the fact that I wasn't in this place personally when I was in politics, and I genuinely regret that. It was very hard, personally." He asks of those who doubt his sincerity: "If they can't offer support, at least offer understanding."

And here is where I get stuck.

Mr. Mehlman says that he understands those of us who can't offer him our support now that he has come to terms with his gayness. He admits that even as chairman of the Republican National Committee, he was just following orders when the Republican right launched attacks on the civil rights of gay people, attempting to turn them into pariahs who were not worthy of being American citizens.

Because that's what we're talking about. The full-scale attempts to deny gay people of their civil rights, even, in some cases, their very right to existence, all happened under the watch of a man who now acknowledges that he is gay.

If he was David Brock, he would not only disavow his past behavior, but he would leave the party that perpetrated these activities. But Mehlman, in one of those bizarre logical twists, thinks that gay people should join the Republican Party because it alone is facing off against Islam -- the greatest threat to gay people on the planet (according to Mehlman)?

Come again? If you read Harper's, then you have already seen Jeff Sharlet's chilling article about his recent trip to Uganda. You see, the Ugandan anti-gay bill, which would mete out death to "serial homosexuals," is a bill that has been pushed by members of The Family, the organization within the Republican Party that pushes an extreme Christian right-wing agenda.

The greatest threat to gays in the world?

Ken. Look in the mirror. Either change the party you're in by fighting the forces of evil within it (and I do call The Family evil deliberately), or take a real stand, denounce your past, those you led,  the agenda you were a part of, or leave the party and become an activist like David Brock has.

You want my understanding?

You have to earn it.

You spent a long time earning my contempt.