Hey, Glenn Beck, I was at the March on Washington 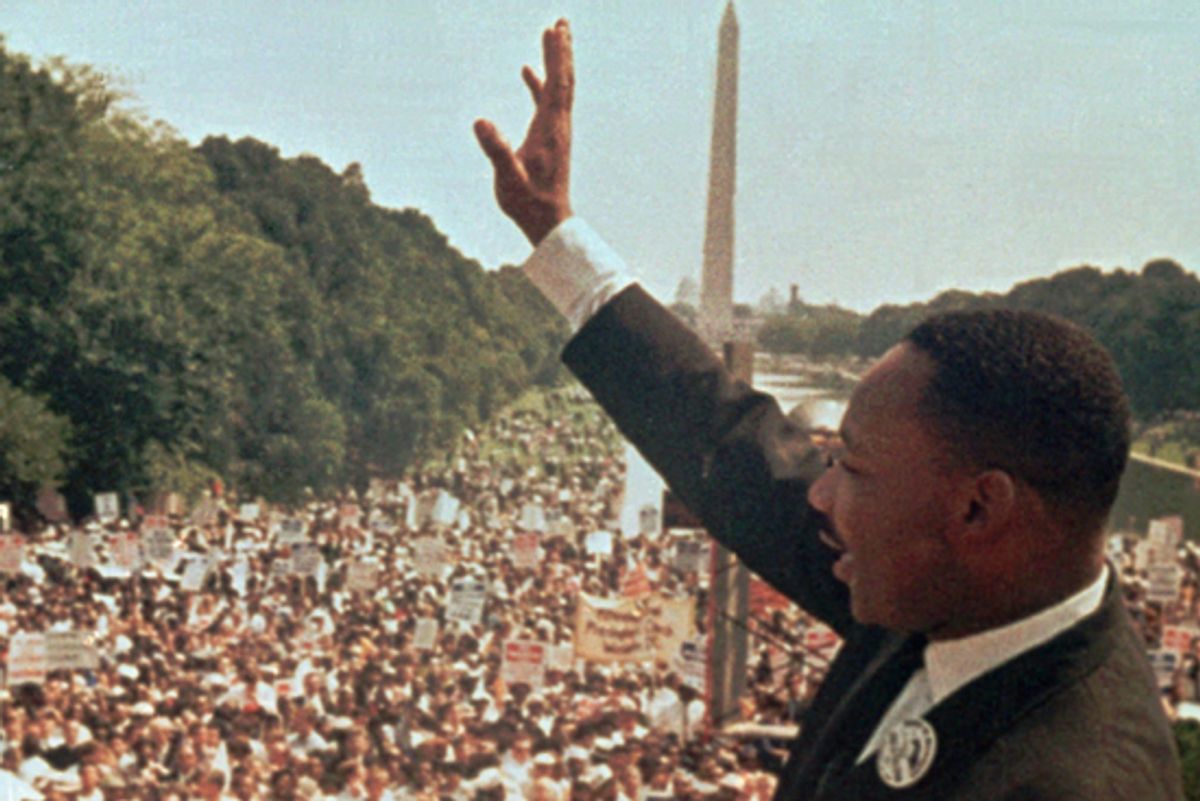 Several small groups of radicals, anarchists, civil rights movement people, crazies -- the quixotic among us at the time -- had concluded that the Great March on Washington had the potential to bring together a disparate group of Americans, mostly black Americans, and deliver a statement on the condition of the movement vs. American society. This had struck us (I was among this group of misfits) as just audacious enough to possibly soften some establishment hearts and maybe push the stone to a resting place at the top of the hill.

As the date grew near there was much chatter on the street to the effect that malcontents from far and wide intended to disrupt the event -- or worse. We, of course, were going to make sure they'd have to go through us first. This would, in the best case scenario, have resulted in a terribly bloody skirmish or perhaps numerous ones; in the worst, we'd all go down in a blaze of glory and there would be a riot of proportions not seen in the Republic, or at least its capital, in anyone's memory.

I was 18 and living in the throes of a "nothing to lose" mentality I had acquired over the preceding two years, for reasons that barely rate mentioning in hindsight. I guess it may be a marker of misfits that they often feel they have little or nothing to lose. We certainly felt that way, even though some of our number suffered from megalomania and several were potential plywood shack types, except that archetype (the Unabomber?) had not yet been coined by the media, which was still largely conservative and limited to print, the 5 o'clock news and Walter Cronkite. Actual journalism, in other words.

There were a number of groups of young people, well-intentioned liberal kids mostly affiliated with local church groups, planning to show up for the occasion. I'd started out that way myself, having been accidentally radicalized through my church, which operated under the loose banner of the National City Christian Church, Disciples of Christ. They'd not realized what they were loosing back in the fateful summer of 1960, but over the next three years our youth group was morphing into a radical-left cell capable of almost anything, whether it was a good idea or not. Quite often it was not, but arrival of the police usually only served to convince us it had been a great idea that just needed refining.

The summer of 1963, then, was marked by graduation from the liturgical approach of loose, liberal Christianity to the crazy quilt Moorish Orthodox Church of America, my natural next home. An offshoot or perhaps incarnation of the Moorish Science Temple, the MOCA comprised a group of jazz musicians, poets, artists, improvisational comics and a few deeply weird people like the guy with the mustache and cape (that's all I ever knew of his identity -- he much resembled Brian Stack's "The Interrupter" from the Conan O'Brien show decades later). As an acolyte of Salvador Dali (along with one of my close friends from school, who also taught martial arts and built explosive devices), the MOCA was a natural magnet for someone like me. It's served me well off and on over the years as it has waxed and waned as a force. The nominal headquarters still operate in Ong's Hat, N.J., in case anyone might conceivably be interested.

Via the MOCA I'd discovered an appendant underground group, which, out of consideration for possible warrants or lawsuits outstanding, will remain nameless here, and it was this group that developed the theory that there was potential for a big, bloody riot on the National Mall on Aug. 28, and that somehow a futile gesture by a bunch of young white guys might be just the thing to discredit those who came to bust up the party.

This is what guys think when they're 18, at least in the time locker that is marked 1963, and especially the subsection titled August in D.C.

Many of us had been involved in the civil rights movement since at least 1960, but we were the few now tired of singing "We Shall Overcome" and had begun instead chanting "We Will Overcome YOU!" That was the state of our mostly adolescent (and therefore not fully formed) brains as we began our slipshod, half-assed plan to position ourselves so as to turn back or at least befuddle the Forces of Evil on the day of the march. This is how I came to be on the Mall on the occasion of Dr. Martin Luther King's now historic and legendary "I have a dream" speech. This is how my associates and I graduated from singing Kumbaya to organized and aggressive activism. This is how we arrived at that moment when we realized some of us could actually -- no, really -- die for a cause.

It is also why less than all of us showed up that day. It takes a calm kind of crazy to accept the potential for death when one is only embarking on what we for a brief period believe is "real" life.

Some of us were armed when we arrived downtown. Virtually everyone who was, wound up secreting his weapon somewhere on the periphery. Many of those weapons were never retrieved.

In the process of making our way to the Mall, we had to pass through some small groups of rednecked, frog-faced bigots who'd come out to scoff. Once during such a passage I heard, from right behind me, the words "Nigger lover." I froze, considered my options, dismissed the urge to kill, turned around and found myself facing an older man (probably the age I am now, but of course he looked much older, and was in the company of others who looked to be of similar age -- hate has a way of putting years on a person) wearing VFW regalia. I stared at him for a long moment, his eyes dropped, and I said, through clenched teeth, "May God help you." No one spoke. I turned back around and continued working my way through the crowd.

And so I found myself separated from my partisans, not alone in the least, but awash in a sea of humanity, most of it varying shades of brown, all of it remarkably calm and assured in its certainty that there would be no trouble at this event. There was a magnetic cohesiveness in that mass of a sort I have not experienced before or since. There was no Us and Them, no You and Me. I have never felt anything quite like it.

The world was in the process of being changed, and I was, had I chosen to frame it this way, trapped in the event. I didn't feel trapped, however, but cradled.

The rest, of course, is history, one of the most stunning gatherings, public addresses and dramatic sociopolitical moments in the history of the Republic.

I shook hands, held hands, laid my hands on the shoulders and had other hands laid on mine, of people I'd never met and even a few I had, as we steadied each other. By that point if one was there, nothing else mattered. One was lost, absorbed in something vastly larger than a single self.

Less than five years later I would watch large portions of my city destroyed by the rioting we'd anticipated in advance of the great march. But that isn't this story. That is another story.

It is for this reason I am more than incensed by the lying "act of providence" that caused Glenn Beck to "accidentally" choose Aug. 28 for his "Restoring Honor" rally of right-wingers, Tea Partiers, neoconservatives, fascists, the delusional and the truly wicked, the New Kluxers disguised as patriots wanting something, something they cannot or will not identify openly.

Should Beck's rally start and end without incident I will be gratified. Should lightning strike it I will also be gratified, and probably converted to a belief in some sort of Zeus-like being who sits in the sky. Or maybe I'll just believe more in statistical probability than I ordinarily do.  At any rate, such an unlikely event would be interpreted by Beck's followers as some sort of indictment, and not anything they could possibly blame on us librul socialist Muslim commie perverts.

My plan is to follow the route of the Rev. Al Sharpton's group, which will walk from Dunbar High School to the site of the to-be-unveiled statue of Dr. King.

I know my place.

Would that Glenn Beck knew his. He'll find it soon enough, on the junk heap of history. But Beck is not the problem nor his undoing the solution. It is all on the people who watch, listen, whoop and holler at Beck's incomprehensible yammerings.