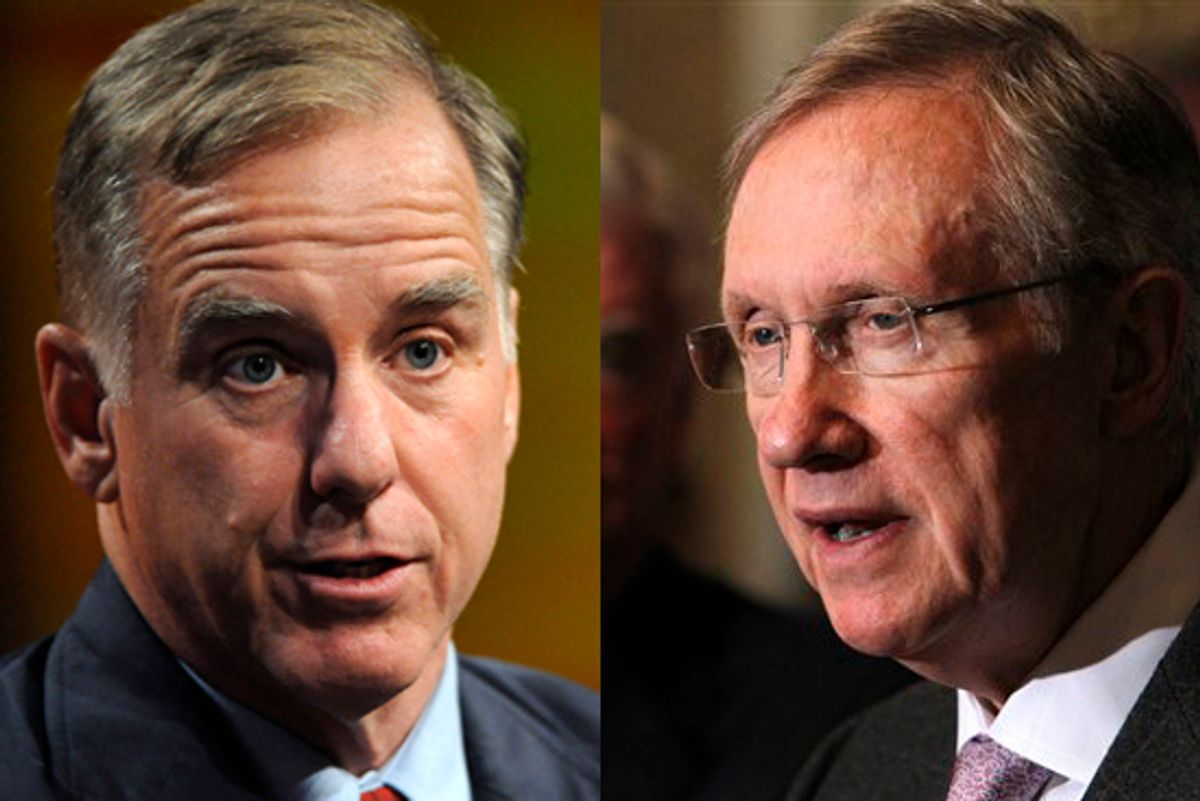 Harry Reid and Howard Dean had their reasons for coming out against the Park51 project in lower Manhattan last week. Well, at least Reid, who is locked in a tight reelection campaign in Nevada, did. Dean's motives are a little harder to discern.

But whatever they hoped to accomplish, one thing is indisputable: Reid and Dean both did an enormous favor to the right-wing fear-mongers who have been pushing the "ground zero mosque" hysteria, equipping them with a compelling talking point for the cable news circuit. Here's a sampling of how Reid and Dean have been invoked in the past few days, often (but not always) on Fox News:

Rick Santorum ("On the Record With Greta Van Susteren," Aug. 23):

I suspect Howard Dean and others have been saying this to the Obama administration for quite some time that the arrogance and the dismissiveness of the American public's opinion on a whole variety of things, including this one, is starting to corrode not just support for him but for the Democratic Party generally and is hurting candidates across this country.

And that's why you see Harry Reid stepping out and saying what he said. They are walking away from him because he doesn't seem to care what America thinks, and that is not good news for Democratic candidates across the country.

I think what's complicated the simple media narrative here, which would ordinarily be, and to some extent, has been that everyone opposed to the project at this particular place must be a bigot, as the fact that President Obama pointedly refused to endorse the wisdom of that location. And you had Harry Reid and Howard Dean coming out and saying they don't think it's a good idea to be there. So that's really complicated.

Now, if you're keeping score, it is Senator Harry Reid and Howard Dean against the mosque. Speaker Nancy Pelosi and the president okay with it. That is a Civil War within the Democratic Party, no matter how they try to spin it.

I mean, you had Nancy Pelosi on Tuesday say that we need to look into the funding of the opposition to the mosque. I mean, to the best of my knowledge, we're talking about Americans who are exercising their First Amendment right of free speech to say they don't like the mosque. They think it is as Howard Dean said an affront.

Mr. Horowitz informs us that the planned Islamic center has become "the prime target of national conservatives who, after years of disparaging New York as a hotbed of liberal activity, are defending New York against a mosque that will rise two city blocks from Ground Zero."

The hypocrisy! Have they no shame?

ANDY SULLIVAN: Well, I'm familiar about what he said. And it's kind of profound, actually, Howard Dean, very much the Democrat liberal, being on the side of moving the mosque. I find that pretty moving.

DON LEMON: What's your response to those who have said that -- who think this is a left-vs.-right issue or a conservative-vs.-Democrat issue?

SULLIVAN: Oh, I completely disagree. Just look at -- you have got the top Democratic guy, Harry Reid, saying it's not a good idea to put it there.

And then you have Obama saying, they should have the right to put it there. So, I think this goes beyond left-right, Democratic- Republican lines.

Let's just focus on the pundit sector. There's been a chance for them to demonstrate their moral superiority over the average American by taking this enlightened multicultural position. Now that's fine for the Democrats until they notice that Obama and Harry Reid and Howard Dean were not on board. And now, they're slamming them too. So they're living in their little isolated world -- ivory tower, where they reign.

MATTHEWS: You said this is an issue of security. Well, they don't agree with you.