A New York Times video slide show highlights the power -- or is it the sex appeal? -- of these top athletes 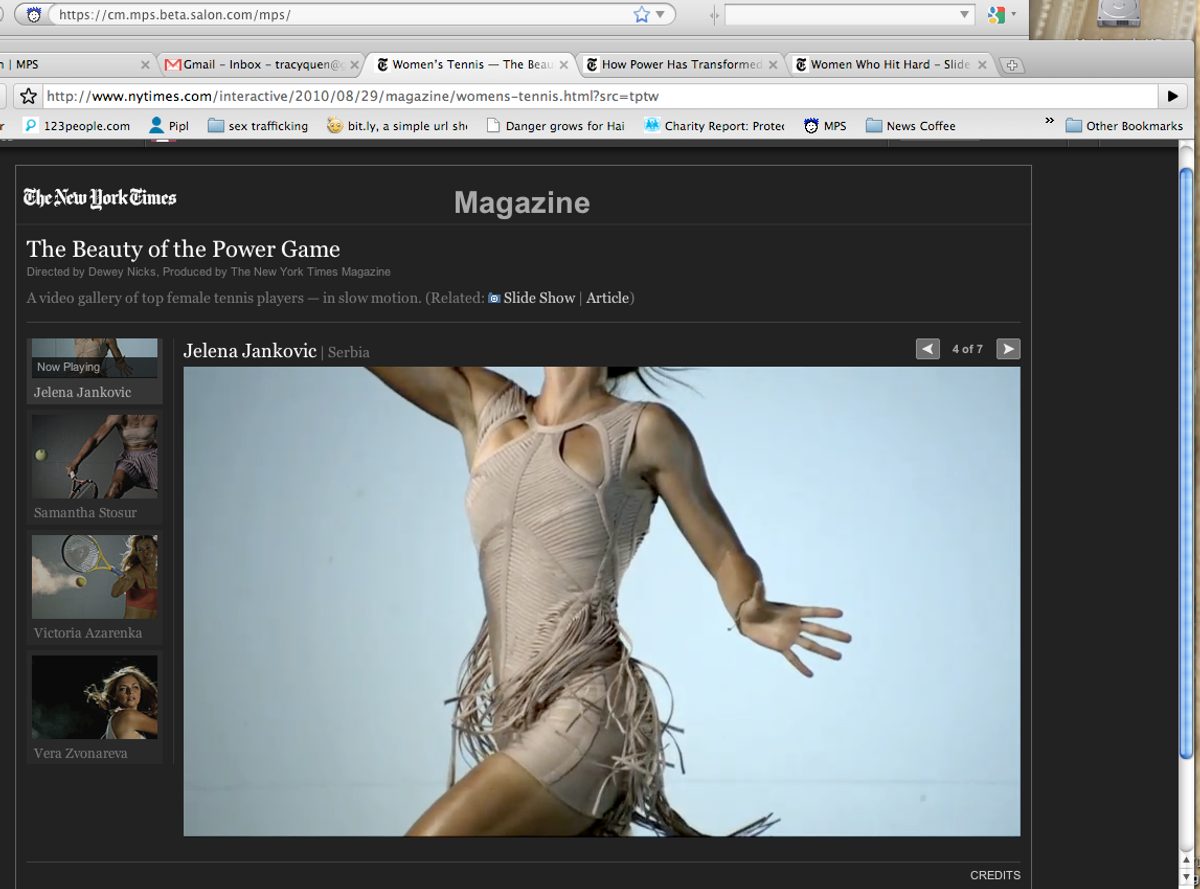 I was very excited to read a Web preview of a piece in this weekend's New York Times Magazine about, as the headline puts it, "Women Who Hit Hard." In the sprawling article, Michael Kimmelman writes that professional female tennis players are "stronger, bigger, faster, better trained and pushed above all by the example of the Williams sisters. Serena, glorious and musclebound, and Venus, long-limbed and tall, have redefined the sport around power." The point, you see, is to celebrate the strength and athleticism of the sport's top female players.

That's why I was surprised when a link to an accompanying video slide show titled "The Beauty of the Power Game" was forwarded to me by a co-worker with a note that he found it "kind of weird and creepy the way they glammed them up." Having glossed over the slide show when reading the piece earlier, I clicked the link and started watching the first clip of Kim Clijsters. In slo-mo, she bounds into the frame, muscles rippling, and nearly goes into the splits as she brings her racket to the ball. She looks like a lioness on the hunt — long blond curls falling around her face, a sneer on her lip, her eyes narrowed with a singular, predatory focus. She is an awesome sight to behold. I think: What's weird or creepy about this?

But then follow several more clips of various players, all in slow motion, with a swelling classical soundtrack. There is Serena Williams with her makeup meticulously done, her skin covered in glitter. She hits the ball and yet more glitter flies every which way. Elena Dementieva is up next wearing a bizarre strappy dress. She gracefully twirls in slo-mo, looking very much like a ballerina. Samantha Stosur's arms look cut from stone, and her movements send mesmerizing ripples up her powerful thighs, but she is wearing a dissonantly delicate bandeau bra top (which prompted a friend of mine to comment: "Hello, nipples") and a pleated lavender skirt.

I suppose part of the difficulty in fairly evaluating these videos is that we don't do so in a vacuum. The common critique when it comes to women in sports is that they get attention only for being sexy, and that is especially true with tennis. But the Times didn't toss Anna Kournikova in front of the camera in a teeny-tiny tennis outfit. These are truly some of the most powerful women in the sport, and they do challenge mainstream notions of femininity. (In particular, Williams, who has talked about past discomfort with her "super-curvy" body. Note, though, that she is one of two players who are filmed only from the chest up.) So, is it creepy or beautiful? A totally scientific poll of my instant-message buddies resulted in no clear consensus.

Personally, I find it to be a little bit of both. As a general rule, I'm not opposed to seeing female athletes as sexy or sexualized. That would make me quite the hypocrite, as I didn't complain when Vanity Fair came out with its issue featuring male soccer players in their underwear. (Quite the contrary — I ran out and bought a copy the first chance I got.) Athletes' bodies are in top form; they are exquisite and godlike. But the glamorous makeup and wardrobe — and that freaking glitter — in the Times slide show do seem a touch odd. As the co-worker who forwarded the link to me said: "The vibe seems to be 'we will show you that female power can be sexy' — which it can, of course. But then, they couldn't just trust that — they had to add this other stuff, as if to say, well, it can't be sexy on its own."