"I was wrong again!" What Ben Bernanke meant to say

The Fed chairman delivers a big, but boring, speech on the economy at Jackson Hole. Here's a translation 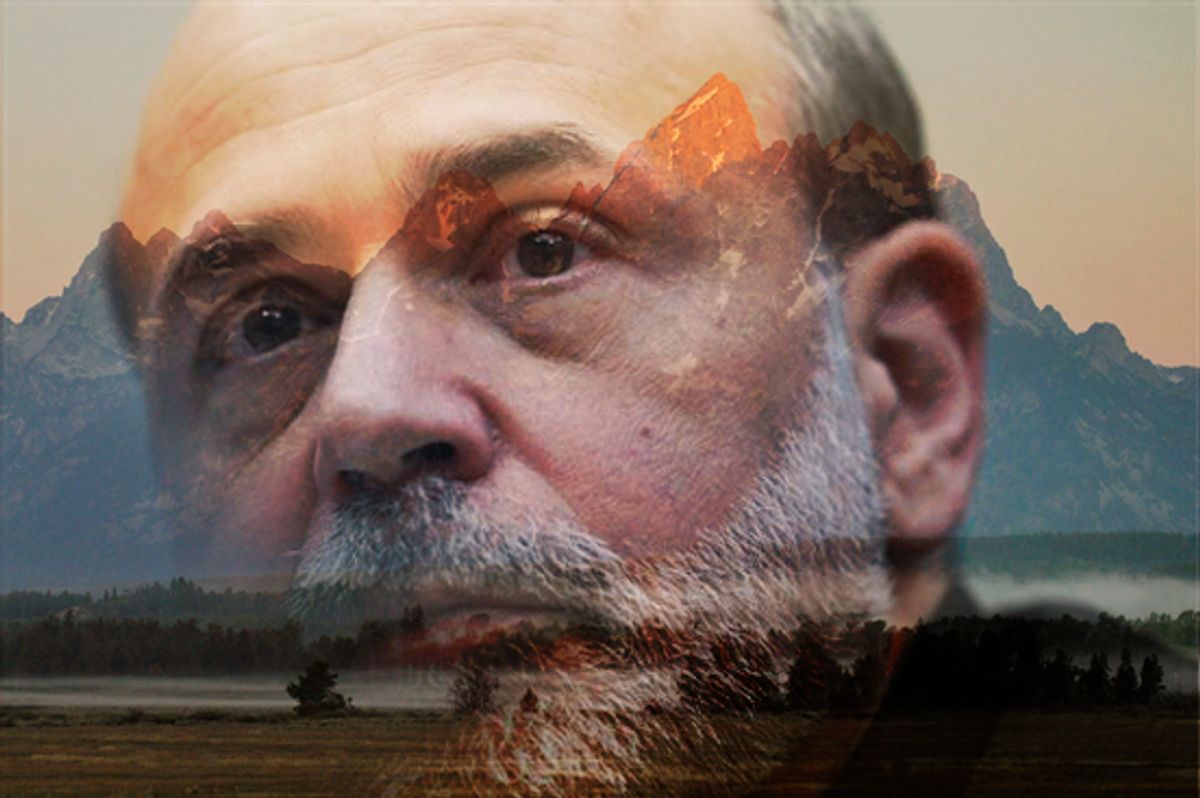 Early morning sunlight illuminates the top of the Teton mountain range in Jackson Hole, Wyoming August 21, 2009. The U.S. Federal Reserve is holding their annual Jackson Hole Economic Symposium with visiting bankers from around the globe meeting with Federal Reserve officials, academics and other financial experts. Federal Reserve Chairman Ben Bernanke on Friday said prospects for a return to global economic growth looked good "in the near term," the clearest signal yet the world's most powerful central banker thinks a recovery is at hand. REUTERS/Price Chambers (UNITED STATES BUSINESS) (Â© Str New / Reuters)
--

As a man, Ben Bernanke is prone to understatement, a tendency that was reinforced very early in his term as chairman of the Federal Reserve when a dinner-party comment he made to CNBC anchor Maria Bartiromo sent financial markets into a tizzy the next day. Therefore, any speech he gives -- in particular, major speeches on the state of the economy at a time of high national anxiety -- must be read through a special filter. I call this filter the Bernanke-Hype-ometer, and I have applied it to the address he gave at Jackson Hole, Wyo., Friday morning. (Bernanke comments in bold, followed by Hype-ometer translations.)

The annual meeting at Jackson Hole always provides a valuable opportunity to reflect on the economic and financial developments of the preceding year, and recently we have had a great deal on which to reflect.

Hey, just this morning, the Bureau of Economic Analysis downgraded the second quarter GDP growth rate to a miserable 1.6 percent! So, even after juicing the economy every which way but loose the last two years, we're headed in completely the wrong direction. Congress won't do anything to help, so now everyone wants me to stop the bleeding.

However, although private final demand, output and employment have indeed been growing for more than a year, the pace of that growth recently appears somewhat less vigorous than we expected.

Remember how I was the wrongest person on the planet when I said the subprime mortgage bust was "contained" and wouldn't cause a worldwide financial crisis? Haha, man that was dumb. Well, guess what, I was wrong again earlier this year, when I decided the time was ripe for the Fed to stop bailing out the economy.

Incoming data on the labor market have remained disappointing.

The working class is unbelievably screwed. This is kind of bumming me out.

Overall, the incoming data suggest that the recovery of output and employment in the United States has slowed in recent months, to a pace somewhat weaker than most FOMC participants projected earlier this year.

Despite the weaker data seen recently, the preconditions for a pickup in growth in 2011 appear to remain in place.

Come on -- do you know what would happen if I didn't say that things will get better, eventually? Wall Street would commit mass hari-kari.

At this juncture, the risk of either an undesirable rise in inflation or of significant further disinflation seems low.

OK, sure, unemployment is in the toilet, but don't expect us to do too much about it, because the only thing we really care about is inflation, and as far as we are concerned, everything's fine on that front.

OK, let me lay it out for you. The one thing the Fed is really prepared to do to help the economy is to keep purchasing debt, such as Treasury securities. By keeping our unbelievably monster huge portfolio of debt high, we theoretically lower the cost of borrowing throughout the economy. That should spur faster growth. We stopped doing this a while back, but so many people started refinancing their mortgages that our holdings of mortgage-backed securities began to disappear, which, ironically, meant that by not acting, we were actually contributing to a tightening of the money supply. That's a big no-no when economic growth is flat-lining. So when the economy started to go downhill again, we changed our strategy -- but not until after a big fight with members of the conservative faction of the Federal Reserve Bank's Board of Governors who believe that even such a cautious step was far too aggressive. These guys just don't care about unemployment. Some of them even think it's time to start raising interest rates! Hahahahaha.

By agreeing to keep constant the size of the Federal Reserve's securities portfolio, the Committee avoided an undesirable passive tightening of policy that might otherwise have occurred. The decision also underscored the Committee's intent to maintain accommodative financial conditions as needed to support the recovery. We will continue to monitor economic developments closely and to evaluate whether additional monetary easing would be beneficial. In particular, the Committee is prepared to provide additional monetary accommodation through unconventional measures if it proves necessary, especially if the outlook were to deteriorate significantly.

I am not going to be responsible for yet another market crash. So I stomped all over the reactionaries, because even a blind man can see investor sentiment is as fragile as a 2-year-old on a sugar crash. I really don't want to be remembered as the Federal Reserve chairman who presided over TWO recessions. So let me tell you plainly: If the shit really hits the fan, we're going to open the taps wide open, buy every Treasury bond in sight, drop money from helicopters, and keep the U.S. economy on life support.

This is why, incidentally, the Dow Jones Industrial Average is back over 10,000 points. Yay me!

A rather different type of policy option, which has been proposed by a number of economists, would have the Committee increase its medium-term inflation goals above levels consistent with price stability. I see no support for this option on the FOMC.

Paul Krugman, who is one hell of a pain in the ass, believes that the Fed is far too concerned with keeping inflation low. He keeps whining about unemployment, and thinks that if we just did so much as announce that we are prepared to accept higher inflation, and then pursued monetary policy along those lines, the economy would get a steroid boost that would finally shake it out of its doldrums. Sorry, but that is completely nuts and it is NEVER GOING TO HAPPEN. Ever! Please shut up, Paul.

I know, I know, the Federal Reserve is entrusted by Congress with two mandates -- promoting full employment and keeping inflation low. But everyone knows that we only really care about price stability, so never mind what I said before about the shit hitting the fan. As long as inflation is fine, we're only going to take baby steps.

Despite this recent slowing, however, it is reasonable to expect some pickup in growth in 2011 and in subsequent years.

Somewhere, over the rainbow, skies are blue.