The sad, sad demise of a right-wing star 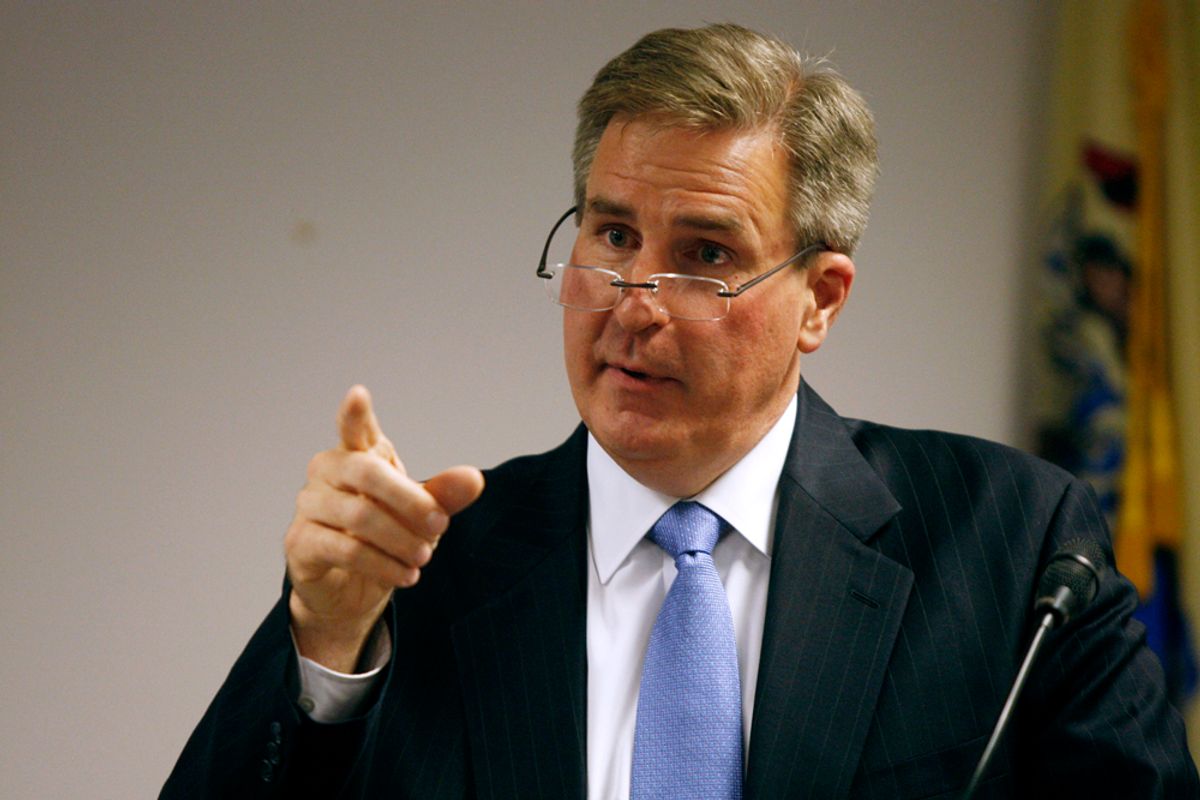 FILE - In this May 7, 2010 file photo, New Jersey Education Commissioner Bret Schundler gestures as he speaks to a group in Trenton, N.J., about plans for tying teachers' pay to how well their students perform. New Jersey Gov. Chris Christie announced he was firing Schundler Friday Aug. 27, 2010 , days after it was revealed that a simple mistake on an application form might have cost the state a $400 million education grant. (AP Photo/Mel Evans, File) (Mel Evans)
--

If you don't live in New Jersey, you probably aren't too familiar with Bret Schundler, the state education commissioner who was fired today for botching an application form that cost the state millions in Race to the Top funding. But you were supposed to be by now.

Back in 1999, William F. Buckley Jr. declared that Schundler, a rising star on the right since his unlikely election as the mayor of Jersey City in 1992, was one to watch for the GOP's presidential nomination in 2008.

This was hardly an uncommon view on the right back then. A former Democrat with a successful stint on Wall Street under his belt, Schundler took advantage of some truly extraordinary circumstances -- namely, the conviction of an incumbent mayor and the presence of 16 other candidates in the winner-take-all special election to replace him -- to claim the mayoralty of poor, heavily black and Hispanic Jersey City in '92. Then just 33, he was venerated by pundits nationally as a new generation's Jack Kemp, a true believer in the racially unifying potential of free market economics. The question immediately became when he'd make his next move and run for statewide office, and after that, when he'd jump to the national stage.

But, as today's news attests, that's not quite how things played out. Schundler's highly public dismissal from a state-level Cabinet post, complete with the humiliating detail (reported by the Star-Ledger) that he asked Gov. Chris Christie to fire him (instead of simply resigning) so that he could collect unemployment, almost certainly ends his career in public office. But while he ended up far, far from the national spotlight he once seemed destined for, it's worth remembering how close he came to getting there.

Not long after Buckley's '99 column ran, Schundler began running for his party's 2001 gubernatorial nod. The race was supposed to be wide open, with Republican Christine Todd Whitman prohibited from seeking a third term. But when Whitman left at the end of 2000 to serve as George W. Bush's EPA administrator, Republican Senate president Donald DiFrancesco was elevated to the governorship and immediately began running for a full term. Schundler stayed in the race, fighting a GOP establishment that considered him far too conservative to win statewide (and far too averse to deal-cutting to be of any use in Trenton if he ever got elected), and caught a break when an ethics scandal forced DiFrancesco from the race.

Desperately, the GOP establishment recruited a replacement candidate, former Rep. Bob Franks, and even changed the date of the primary to give him more time to campaign. But the move backfired, with the GOP grass roots rallying behind Schundler in protest. In the late June primary, he crushed Franks by 14 points. It was the first time since 1978 that the candidate of the right-wing grass roots had won a statewide GOP primary. Schundler began his victory speech with a line from "Good Will Hunting." "Do you like apples?" he asked his supporters. "Well, how about them apples?" Bill Buckley's boy was on his way.

But that's where things peaked. The GOP establishment had been right about Schundler's fall prospects. The Democratic nominee, another supposed rising star named Jim McGreevey, savaged Schundler for his views on abortion and gun control. Schundler fell behind early and his numbers never budged; McGreevey won easily. (In a humbling footnote, Jersey City -- which had embraced Schundler in nonpartisan municipal elections -- voted overwhelmingly for McGreevey.)

Not that he gave up on the dream. In defeat, Schundler immediately began preparing for a second gubernatorial bid in 2005. On the surface, this made sense: McGreevey, Whitman, Jim Florio and Tom Kean all needed at least two tries before winning statewide. But his strategy reeked of overcompensation for the trauma of '01: To avoid the cultural land mines that had killed him, Schundler crafted a complicated property tax reform scheme that, he believed, would appeal to all factions of the party and promoted it with McGreevey-like message discipline. But it failed to change the establishment's dim view of him, and it failed to generate the grass-roots enthusiasm that had propelled him four years earlier. Plus, the establishment behaved itself this time -- no messy DiFrancesco-for-Franks switches. Schundler finished second in the primary with 31 percent.

Then, things just started to get sad. Once the undisputed leader of New Jersey's conservative wing, Schundler's throne was soon claimed by Steve Lonegan, a right-wing small-town mayor (and one-time Schundler backer) who faulted Schundler for shying away from red meat issues, like immigration, abortion and gay rights. In the middle of last decade, it was Lonegan -- not Schundler -- who was in demand at right-wing gatherings across the state. And it was Lonegan who turned that interest into a gubernatorial campaign in 2009, though he lost the primary to Christie (and has since seen his own influence wane, as Christie has emerged as a national right-wing favorite).

As this played out, Schundler turned his sights back to Jersey City, hoping to relaunch his political career where it had started. In the summer of 2008, he announced that he'd run for mayor in 2009, challenging incumbent Jerramiah Healy, a former municipal judge who had previously made national headlines for scuffling with a police officer on the Jersey Shore and for being photographed nude on his front porch after drinking. But weeks later, the stock market collapsed, ravaging Schundler's portfolio. There would be no mayoral comeback, he reluctantly announced: He needed to make some money.

A year later, he seemed to catch a smaller break when Christie, after knocking off Jon Corzine in the general election, asked him to be his education commissioner. The teachers unions revolted; Schundler had long been an eager booster of charter schools. But he was confirmed anyway. It wasn't much -- a low-visibility Cabinet perch in state government -- but he was back in the game. It didn't last long. Months into his tenure, Schundler publicly contradicted Christie and was slapped down. Many expected him to quit or be fired, but he stayed on, until this week, when his department's clerical error generated perhaps the worst headlines that Christie has faced as governor.

And now he's out, and finished in politics -- and in about as humiliating fashion as one could imagine. Schundler's story is a sad one, unquestionably. Whatever you think of his politics, his heart was in the right place. As a young reporter in New Jersey, I still remember driving around Jersey City with him in 2004 as he excitedly pointed out abandoned properties and old crack houses that had been refashioned as businesses, homes and churches on his watch. The significance of his first election as mayor was always overstated by conservatives: It really was a fluke. But there aren't many ambitious Republicans who would even try to start their political careers in urban areas with large minority populations.

But his demise is also a reminder of how fine the line is in politics between glory and failure. Had the circumstances been different in 2001 and Schundler somehow won the governorship, he would,  indeed, have been on course for the White House run that Buckley prophesied. Christie's own example is instructive: Within three months of taking office, the 2012 speculation had begun. It's hard to believe that Christie's emergence as a national Republican star hasn't, on some level, been agonizing for Schundler to behold. This was supposed to be his fate.