My dog's visit with an embattled superstar

Before Harvard's Marc Hauser became mired in academic scandal, Milo and I spent time at his Canine Cognition Lab 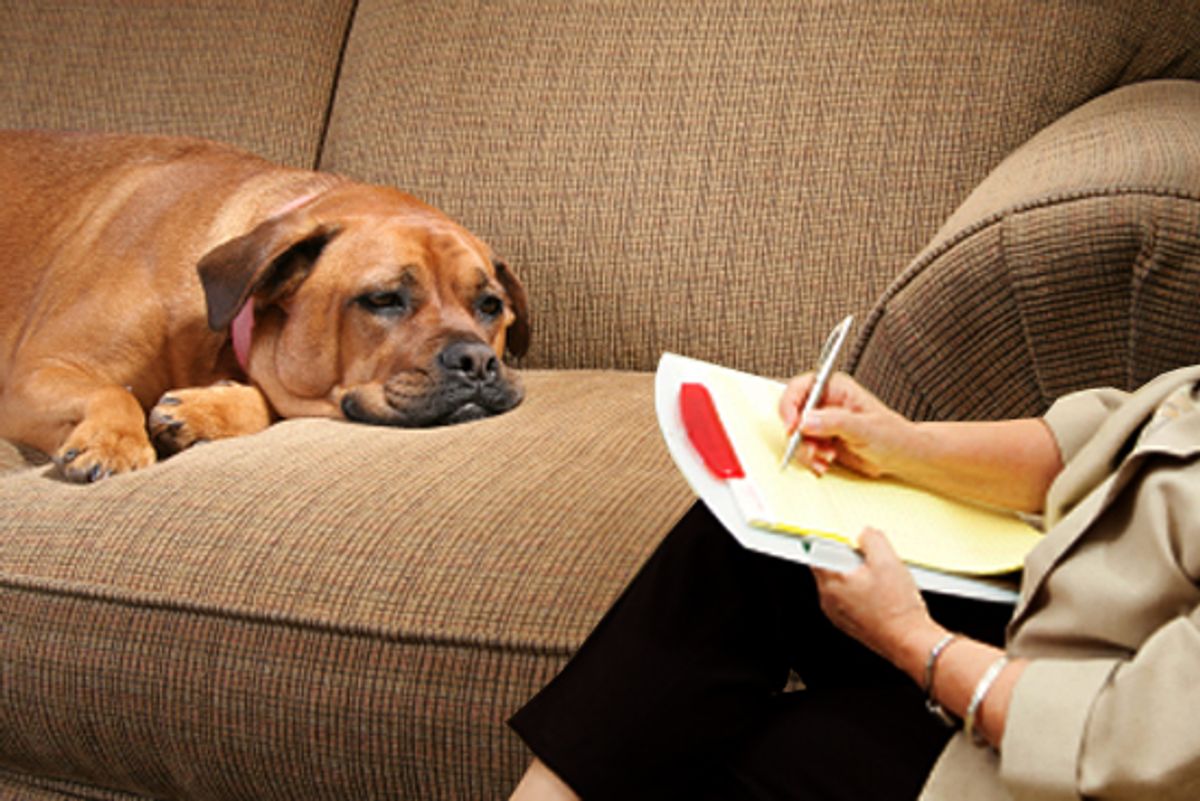 What kind of a pet owner voluntarily submits her dog for laboratory experiments? The kind who very much hoped that the scientists would give out bumper stickers that read, "My Dog Is an Honor Student at the Harvard Canine Cognition Lab," that's who. Now that the academic superstar behind the lab, Marc Hauser, has been brought up on eight counts of scientific misconduct (an imbroglio that's been followed by the Boston Globe and the New York Times, among others), the bumper sticker sounds like a bad idea. I'd have to scrape it off, for sure, like all those John Edwards supporters in our liberal Cambridge neighborhood.

I'd known about Marc Hauser's Canine Cognition Lab, and others like it, for years. I was trained as a research psychologist myself, though my own experimental subjects were undergraduates enrolled in introductory psych. (It's much easier to find undergrads to experiment on, and they don't usually shed.) Still, I was fascinated by work done by Hauser, Brian Hare, Frans de Waal and others on animal cognition. Animals, it appeared, could learn from each other's experiences. They had a sense of fairness: If you rewarded one dog for a trick but not another, the second dog would stop obeying. Such studies were beginning to break down the long-held belief that there was something qualitatively unique about human cognition and to suggest, intriguingly and controversially, that our sense of morality may have roots in evolution.

It certainly sounded plausible to me. As an advice columnist for the Boston Globe, I am constantly asked questions about territory disputes, mating rituals and conflict resolution. The more I learned about animal psychology and evolution, the more I realized that, regardless of species, we are all trying to solve the same social problems: finding a mate, becoming good at what we do, defending our personal space, figuring out whom we can trust and whom we can't. Etiquette, I came to realize, didn't begin in the sitting room, but in the savannah. We may be the only species that has words for concepts such as fairness, reciprocity, deference, cooperation and deception, but we certainly aren't the only ones who practice them.

Besides my intellectual interest in animal cognition, I also have a high-energy terrier mix with an insatiable appetite for novel experiences and chicken tidbits. So when the Harvard Canine Cognition Lab put out a call for volunteer subjects, I couldn't wait to sign Milo up.

Why study dogs and not monkeys? Because increasing evidence showed that while primates could solve problems better, dogs have a much better grasp of how humans think than even our closest relatives, chimpanzees, do. Dogs, for example, know that if you point at one bucket but not the other, the one you pointed at is probably the one with food in it. Chimps, not so much. I'd even cited such studies in my book as evidence of the long history of the dog-human bond. (Full disclosure: I also work part-time at Harvard Business School, which is not affiliated in any way with the Faculty of Arts and Sciences' psychology department, where the study was conducted.)

Milo and I were eventually called for two separate sessions at the lab. The basic protocol of all the experiments was the same. The owner (henceforth referred to as "I," since I am no longer an academic and therefore not obligated to write as though I don't exist) holds the dog ("Milo") between her ("my") knees. Milo is facing two buckets, sometimes with a barrier in front of them so that he cannot see them. A treat is placed surreptitiously in one bucket, and some kind of clue -- a motion on the part of the experimenter, a video clip, a picture on the bucket -- is given to the dog. Then the experimenter makes a gesture (in the two sessions we were in, either bowing the head or kneeling and bowing the head) at which point I release Milo.

The question is: Does the clue lead him to the right bucket?

Of course it bloody doesn't, he's a dog. His notion of cause and effect is immediate. He's not responding to what you did 30 or even 10 seconds ago, he's responding to the very last thing he experienced. Which was the signal to me to release him.

And the problem is, there is no such thing as a neutral human gesture where dogs are concerned. Even if you make a motion they don't understand, they will try to figure it out -- particularly Milo, which makes my evening yoga practice a challenge. And a human lowering his or her head and avoiding eye contact is not a neutral signal to dogs. Talking to other dog-owning friends, I learned that a neighbor's dog refused to approach the experimenters, because she had been well taught by her owners not to go near strangers who are acting funny. The dog of an emotionally sensitive friend turned out to be equally emotionally sensitive, and climbed in the lap of the apparently depressed lab assistant and tried to cheer her up. Milo, who gets experimented on a lot at home, assumed that the lab techs were trying to teach him a trick, and avoided the buckets entirely and scratched at the experimenters' legs so that they would show him again.

The experiments are based, you see, on the notion of giving a dog information and then setting it free to figure out how to best use that information. This might work with primates, but it's not how most dogs are socialized. Unless you have a high-level working dog, you generally do not want a dog to solve problems on their own. The last time Milo solved a problem on his own, we had taken him out on a rowboat and he didn't like being that close to the water. His solution was to jump out of the rowboat. Dogs aren't good independent problem-solvers; if they were, they'd still be wolves. They're good at replicating behavior they've been rewarded for in the past. Milo did brilliantly on the experiments in which people pointed to a bucket with their hands or feet, because he's been trained to. I've trained him so well to look where I point my feet, in fact, that when I dropped a glob of guacamole on my foot itself, I couldn't get him to notice it; he keep sniffing the floor in front of my toes. The experiments Milo and I participated in didn't reveal any information about how Milo thinks. They only showed what kind of behavior he'd been rewarded for in the past.

Marc Hauser isn't up on charges of designing bad experiments; unfortunately, you can't really get in trouble for that. (Instead, he's on academic leave following concerns about his research on primates.) But it's as though these experiments were designed by someone who didn' t know dogs at all. The very thing they were testing for -- the social sensitivity of dogs -- invalidated, as far as I could tell, many of the experiments' results.

One of the major goals of dog-cognition research is to figure out if dogs have a capacity known as "theory of mind." Theory of mind refers to the ability to understand that other people (or dogs) have a mind of their own, and are guided by the information and intentions they have. Children develop theory of mind around 4 years of age -- that's when they become able to lie convincingly, and understand that if Sally leaves the room and you hide her crayons, when she returns, she'll look for them the last place she saw them.

It's hard to test for theory of mind in an animal that can't speak, but there's some indication that dogs might have it (for example, dogs won't beg from a person who is blindfolded, presumably because they know the person can't see them). If dogs can be shown to have theory of mind, it would reveal important information about the effects of domestication on cognition, and possibly help develop better training protocols for guide dogs, or even diagnostic tests or teaching techniques that can be used for non-verbal people with developmental disabilities.

Hauser's experiments convinced me that the lab, at least so far, is not the place to test for such things. Imagine if you were to be tested on your social skills -- at a Japanese tea ceremony, a quinceañera, a Super Bowl party or some other situation utterly beyond your cultural ken. Would you easily divine the intentions and desires of others, or would you have a minor meltdown and start humping people's legs just trying to figure out what was going on?

Of course you would.

A few weeks after our first session at the Canine Cognition Lab, I got a chance to test Milo's theory of mind at home. I was dog sitting his best friend Hermione, to whom Milo was deferential. I started tossing treats to the dogs, either calling them by name or making eye contact before I threw the treat. Milo would not go after a treat that I'd intended for Hermione, even if it landed closer to him. If Hermione saw or sniffed her treat and rejected it (poodles are like that sometimes), then he would eat it, but only if he knew for sure that she'd decisively shown no interest. If she didn't appear to see the treat, and it was intended for her, he wouldn't eat it.

In other words, he was gauging, mostly by eye direction:

2. Whether or not Hermione knew she had been given a treat.

Maybe this sounds like nothing more than a cute dog story, but to a psychologist, it's a lot more. If my observations were correct, Milo was applying his theory of mind both to a human and another dog at the same time.

And it's highly unlikely you could replicate that situation in a lab. The nature of science is replicability, keeping things as neutral and context-free as possible; that is not the nature of dogs. Nothing is neutral when you are a dog.

Psychology in the 21st century strives mightily to be a science and has made some remarkable breakthroughs as such. But why fetishize the lab, the replicable experiment, as the be-all and end-all of research, if the subject matter -- or the subjects themselves -- aren't amenable to it? Many breakthroughs in developmental and clinical psychology were made by careful attention to individuals. Piaget famously kept extensive diaries on his own children. In this age of Flip cameras and YouTube, it would be easy enough to ask dog owners to videotape their dogs at home in particular situations, and then post the videos for experimenters to evaluate. Do social scientists really want the best data they can get, or do they want, more than that, the trappings of the hard sciences?

Me, I'm out of the game. I'll settle for the bumper sticker.

Robin Abrahams is the author of the book "Miss Conduct's Mind Over Manners: Master the Slippery Rules of Modern Ethics and Etiquette" and an advice columnist for the Boston Globe.

Robin Abrahams is the author of "Miss Conduct's Mind Over Manners" and an advice columnist at the Boston Globe.