The only reason to believe Harry Reid can survive 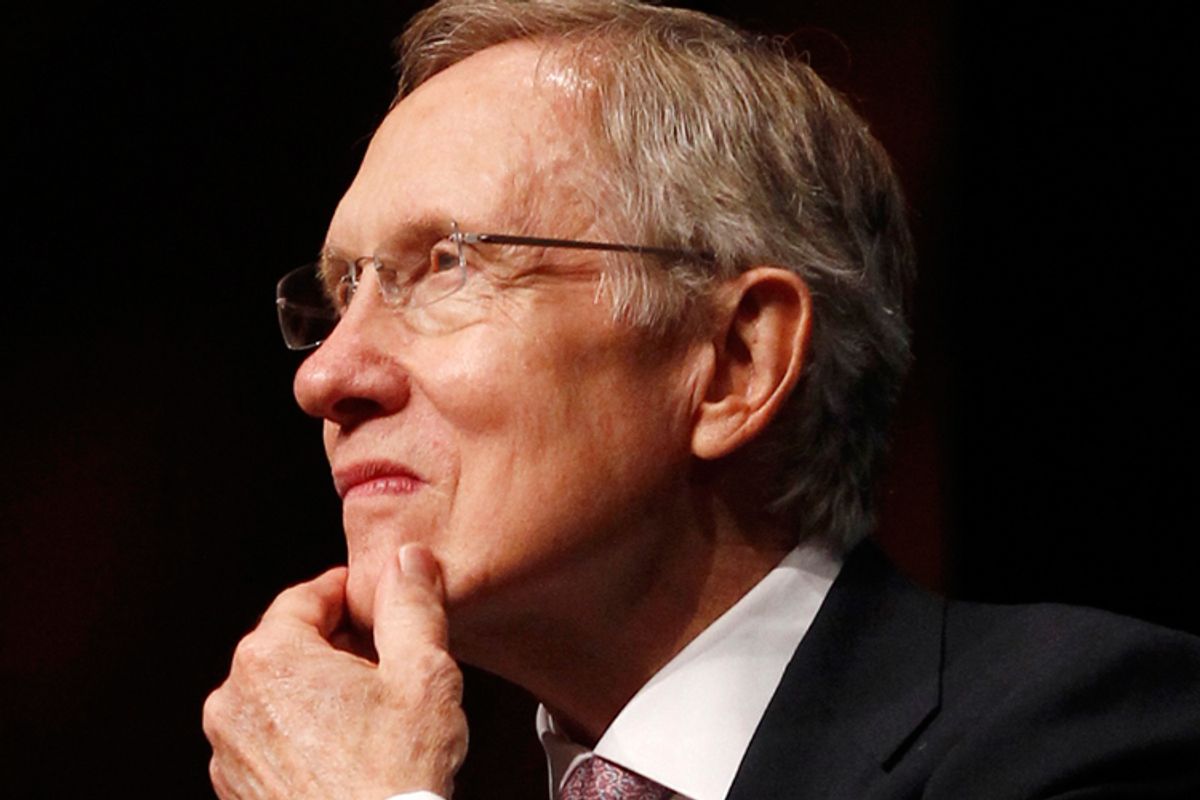 Greg Sargent has a good post up that illustrates a point I've been making all year: Harry Reid has absolutely no business winning reelection.

Sargent notes that Reid leads Sharron Angle by just one point -- 45 to 44 percent -- in a new Mason-Dixon poll, "in spite of the fact that Reid's ongoing attacks on Angle as extreme and dangerous are clearly working to keep her negatives high." Sargent rightly attributes this to Reid's own absurdly high negative ratings and the Nevada electorate's frustration with Barack Obama (both of which are mainly products of the miserable economy, plus the buyer's remorse nature of midterm elections). He concludes that Reid's only hope is to paint Angle as a "horrifyingly awful" option for voters.

The bad news for Reid is that it's exceptionally tough for an incumbent with his poll numbers to pull this off: As I've noted before, just about every senator in his position for the last 30 years has gone down to defeat. The good news, though, is that there is in the (fairly) recent past one Senate race with dynamics strikingly similar to Nevada's -- a race that was won by the embattled Democratic incumbent.

That would be Charles Robb, who who held off Oliver North in Virginia in 1994. Robb, like Reid, faced poisonously high negative ratings and was seeking reelection in an unusually hostile national climate for Democrats:  the year of Newt Gingrich's GOP revolution. Then, as now, Democrats controlled the White House and sizable congressional majorities and popular frustration with the president was mounting. Robb, his image tarnished by a wire-tapping investigation and lurid stories of marital infidelity and wild partying in the 1980s, should have lost easily.

But Robb pursued roughly the same strategy against North that Reid is now using against Angle, frantically painting his opponent as a "horrifyingly awful" opponent. North Iran-Contra past and his embrace of (and by) far-right elements gave Robb an opening to do this, just as Angle's fringe politics have aided Reid.

In June 1994, Robb was saddled with just a 30 percent favorable score in a poll -- with 37 percent of Virginians viewing him negatively. North was also viewed favorably by just 30 percent of voters -- but his unfavorable score was 47 percent. This basic dynamic persisted, more or less, throughout the campaign, with Robb and North trading the lead back and forth. Just before the November election, with polls showing the candidates in a statistical tie, both North and Robb had 39 percent favorable ratings. At the same time, polls found Bill Clinton's job approval rating in the state to be in the mid-30s.

By contrast, the new Nevada poll has Reid clocking in with a 39 percent favorable rating, compared to 52 percent unfavorable. Angle's favorable score is 32 percent, with 43 percent viewing her unfavorably. Two recent automated polls have shown Obama, who carried Nevada with 55 percent in 2008, with an approval rating in the mid- to high-40s -- but the Mason-Dixon survey also shows that nearly half of all voters in the state think his economic program is hurting the country.

On Election Day, Robb survived by three points, 46 to 43. The third candidates, Marshall Coleman, nabbed 11 percent. Some North partisans are fond of claiming that Coleman, a moderate  former Republican who ran with then-Sen. John Warner's backing, siphoned off votes that would have given North the win. While it's true that more of Coleman's voters identified as Republicans than Democrats, pre-election polling consistently showed Coleman's voters favoring Robb as their second choice by a two-to-one spread. (North would have needed 65% of Coleman's voters to surpass Robb.) In other words, North was simply too offensive and too extreme to voters outside the hardcore GOP base. Even a national climate that made Republican-friendly independents eager to side with the GOP couldn't persuade them to check off North's name.

Harry Reid's only hope is that the same will be true with Angle this fall.