From a North Korean hell to home 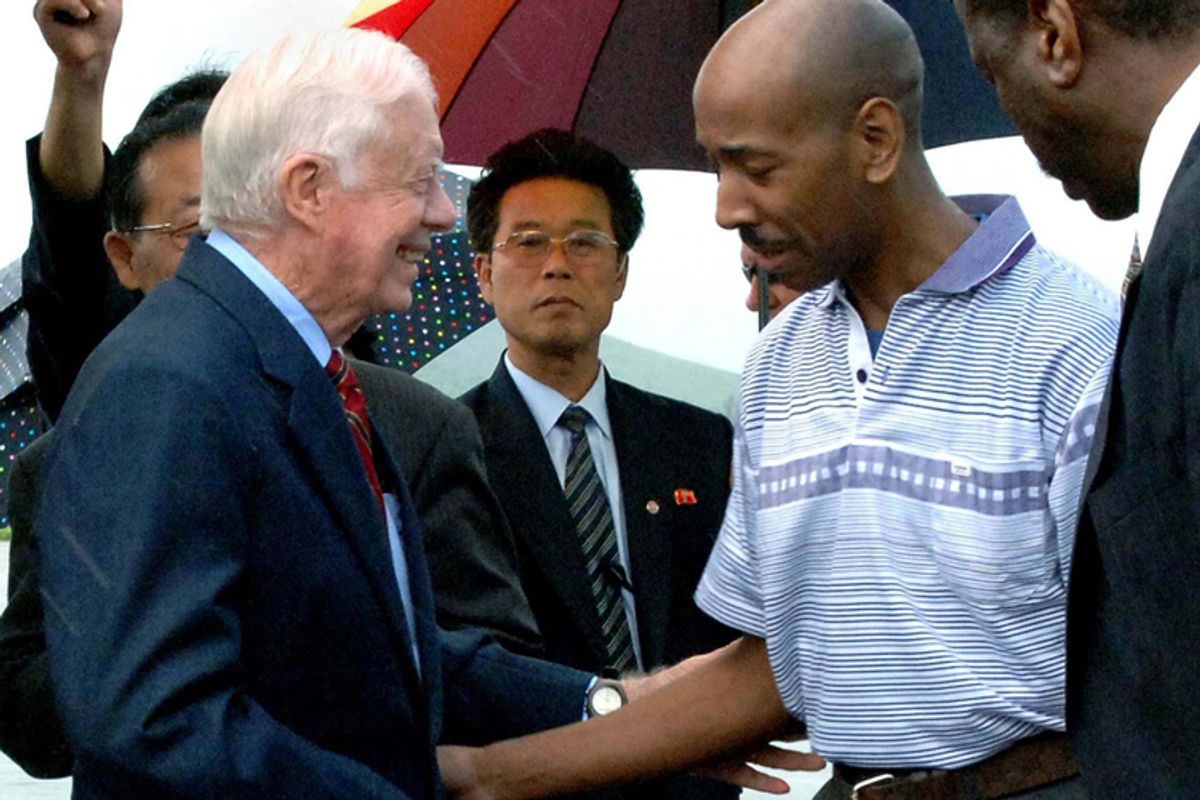 SEOUL -- In most countries, the typical penalty for an immigration offense like illegal entry is arrest, short-term detention and, ultimately, deportation, sometimes accompanied by a fine. But in North Korea, the penalty can be a lengthy prison term and a huge fine. And if you are an American, it may literally take the visit of a former president to secure your release.

Last year, former President Bill Clinton met with the North Korean leader, Kim Jong Il, to bring home two American journalists. And now former President Jimmy Carter has brought out Aijalon Mahli Gomes. Neither leader would have gone to Pyongyang if anything less could have saved the American prisoners from years of misery.

Gomes, a 30-year old American citizen from Boston, entered North Korea without a visa in January. The authorities tried him in a closed proceeding, sentenced him to eight years of hard labor and fined him $700,000. His crime? Illegal entry and unspecified "hostile acts" against North Korea.

Gomes’s friends and colleagues speculate that he went to North Korea to support Robert Park, another American who illegally entered North Korea in December to call for an end to widespread human rights violations by Kim Jong Il’s dictatorial government. After concerted international pressure, Park was released in early February. Gomes, who taught English in South Korea, had attended rallies calling for Park’s release. Park and Gomes, both devout Christians, participated in campaigns for human rights in North Korea.

North Korea has not tried to hide its intention to extort political concessions from the US for his release. In late June, the (North) Korea Central News Agency (KCNA) reported that the government was seriously considering applying wartime laws in his case, which could bring a longer sentence. In early July, KCNA reported that Gomes, disappointed because the U.S. had not come up with a plan to save him, had tried to commit suicide. Sorting threats and hubris from reality in the KCNA reports is a real challenge.

To most Americans, Gomes’s arrest and imprisonment may have read like something out of Orwell’s "1984." But Gomes faced a reality that tens of millions of North Koreans have been hostage to for decades. No matter how horrifyingly unfair his predicament seemed, his foreign citizenship may have prevented him from facing the worst abuses visited on North Koreans who run afoul of the law -- and their family members.

Take Dong-hyuk Shin (an alias). He was born in a forced labor camp in 1982, an automatic prisoner because his parents were. At 14, he was forced to watch the public execution of his mother and older brother, who were caught trying to escape. And that was after prison guards tortured him for weeks, hanging him upside down with his ankles shackled, burning his back with coal, and piercing his stomach and thigh with a metal stick, to extract a confession that he knew about the escape plan. We only know his story because he was lucky enough to finally escape North Korea.

How about Hae-sook Kim (an alias)? In 1975, at 13, she was sent to a mining camp for forced labor with her grandmother, parents and younger siblings because the authorities suspected that her grandfather had defected to South Korea. She spent 28 years there. Her grandmother died in the camp after years of hunger and her mother and younger brother were killed in work accidents.

Inside North Korean detention facilities, especially forced labor camps, humiliation, mistreatment and abuse are simply part of life. Kim told me how she was forced to work 16 hours a day at a mine and how guards would spit into the mouths of imprisoned children. She described the skeletal condition of adults and children alike.

Just as Shin was born a prisoner, so too was Kim imprisoned without a trial. While she was in the camp, Kim never knew why she was there. She only learned about her grandfather’s alleged defection after she managed to bribe camp officials and was released -- at age 41. Again, we only know her story because she made her way to South Korea.

It is difficult to imagine that Gomes’s trial met international fair trial standards. As every lawyer in North Korea is on Workers’ Party payroll, even if he were allowed to choose an attorney, it would have made little difference. There has been no report that Gomes was given the opportunity to appeal, and it is not even clear whether court proceedings were translated for him.

North Korea’s criminal justice system is a sham. The judiciary is neither transparent nor independent. Law enforcement agents and judges, prosecutors and lawyers, are appointed by the ruling Workers’ Party. Some of the most harshly punished crimes -- such as “hostile acts against North Korea” -- are vaguely defined, and appealing a court ruling is practically impossible.

The only effective remedy would be a total overhaul of the judicial system to free it from the government’s absolute control. If North Korea’s leadership were to have any hope for a credible judicial system, it should immediately start engaging U.N. human rights experts to rectify the many problems with its legal system. It is already long overdue.