The Emmys: Who should win?

Will the Academy go for real talent this year -- or just follow the "Glee" bandwagon? 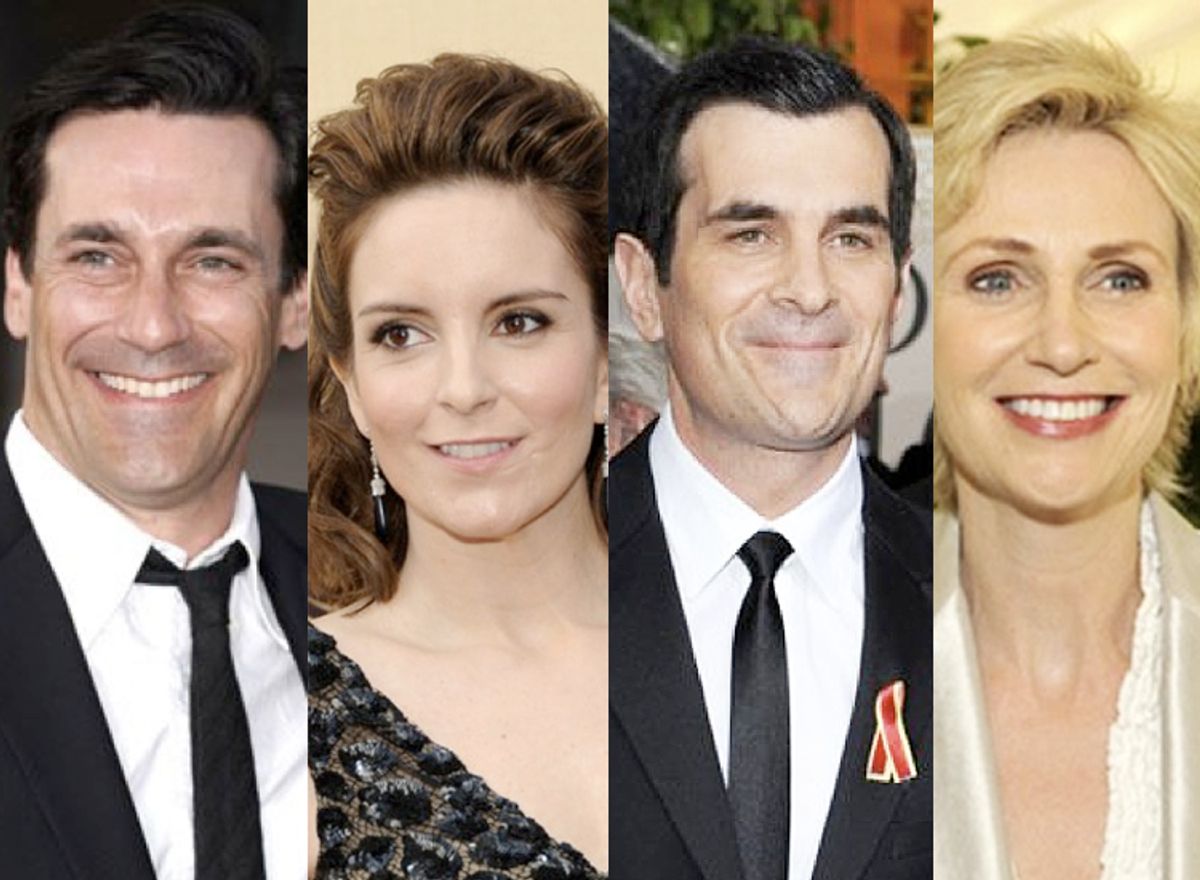 The Emmys, like the Grammys, once offered loyal TV viewers a chance to lament the poor taste of mainstream Americans. In the last few years, though, many of the most deserving TV shows and their stars have been nominated for Emmys. The big question is, will these remarkable shows actually win, or will we spend the next year haunted by the inconsistent yet wildly popular "Glee"?

My hopes remain high that some of the truly great new shows and actors will be recognized in favor of the usual suspects. Then again, in many categories, the usual suspects are also the cream of the crop. Take, for example, the nominees for outstanding lead actor in a comedy, which really begin and end with Alec Baldwin ("30 Rock") and Steve Carell ("The Office"). Given Carell's impending departure from his show, you can bet he'll win -- unless "Glee" fever hits Emmy voters and Matthew Morrison stages an upset for his portrayal of boy-band-hopeful-turned-chorus-teacher Will Schuester. Aside from unintended comedy provided by his repetitive funky white boy routine, though, Morrison's performance can't really touch Carell's twitchy, unsettling brilliance.

Likewise, Lea Michele of "Glee" doesn't come close to Julia Louis-Dreyfus ("The New Adventures of Old Christine"), Edie Falco ("Nurse Jackie"), Toni Collette ("United States of Tara"), Amy Poehler ("Parks and Recreation") or Tina Fey ("30 Rock"), but "Glee" appears in so many categories this year that it's hard not to be fearful of a sweep. The rest here are all immensely talented actresses, but my vote goes to Poehler for serving up the googly-eyed madness of Leslie Knope with increasing subtlety and sweetness. Poehler is an incomparable comedic actress, and "Parks and Recreation" just keeps improving as it matures.

In the supporting actor in a comedy category, it's basically impossible to choose a favorite. As Kurt in "Glee," Chris Colfer brought a prim, dignified air to balance out Kurt's mischievous impulses, and the episodes that featured his character prominently were always the best. But how do you choose between the costars of "Modern Family"? Jesse Tyler Ferguson was delightful as Mitchell, Eric Stonestreet made me laugh out loud at least twice per episode as Cameron, and Ty Burrell brought all of the joys of self-deluded idiot-dad Phil Dunphy to life – you just couldn't take your eyes off him. This one really must be a tie between Stonestreet and Burrell; each of their performances were just deliciously inspired, week after week.

Thankfully, the supporting actress in a comedy category is no contest: Jane Lynch as Sue Sylvester in "Glee" leaves the rest of the competition in the dust, and if they're actually stupid enough to imagine that they can hold a candle to her genius, they are cordially invited to eat her shorts (as Sue Sylvester herself might put it).

This leads us to the award for outstanding comedy series, in which HBO's "Curb Your Enthusiasm," Fox's "Glee," ABC's "Modern Family," Showtime's "Nurse Jackie," NBC's "The Office," and NBC's "30 Rock" are duking it out for the big prize. First, let's eliminate "Curb Your Enthusiasm," which, although occasionally brilliant, now lacks the liveliness and unpredictability of former seasons. "Nurse Jackie," while always entertaining and smart, is that strange hybrid of drama and comedy that never manages to be quite funny enough or quite dramatic enough. "Glee" started out with a bang, full of charm and wit and fantastic musical numbers, but the storylines sagged, the performances varied between dynamic and disastrous, and the dialogue devolved into awkward psychobabble. As great as "30 Rock" and "The Office" were this season, ABC's "Modern Family" was a true revelation. Christopher Lloyd and Steven Levitan dared to create a family sitcom that, unlike pretty much every other family sitcom on TV for the past few years, managed to feel utterly fresh and daring and deeply weird and fun each week, from the start to the end of the season. If "Modern Family" loses this one, I'll eat Sue Sylvester's shorts.

Onward, to the world of drama! Outstanding lead actress in a drama is a tight competition, as always. Nonetheless, I'm never really moved by January Jones as Betty Draper in "Mad Men," either because her character is so reserved, or because Jones doesn't quite show us the glimmers of emotion beneath the surface that other actors on the show do. While Juliana Margulies has been wonderful as Alicia in "The Good Wife" and Kyra Sedgwick is always delightfully off-kilter as Brenda in "The Closer," I think this one is a knock-down drag-out fight between Glenn Close ("Damages") and Connie Britton ("Friday Night Lights"). So which do you prefer, fierceness with hints of heart, or heart with hints of fierceness? Close and Britton are both the main reasons I watch each show, but I'm going to give this one to Close by a nose. Her enigmatic portrayal of Patty Hewes is so fluid and mysterious and full of pent-up rage; she's the force that drives the whole show forward.

Supporting actress in a drama: I'm probably a little biased here, based on my undying love for Christina Hendricks and her uncanny ability to shift between conflicted soul and polished mannequin within the course of each scene on "Mad Men." As talented as some of the other competitors are here, most notably Elisabeth Moss as Peggy Olson ("Mad Men"), I'd love to see Hendricks win this one. I think she'll probably cry if she wins, too -- and isn't it always nice to see a mannequin shed big salty tears?

The nominees for outstanding actor in a drama category aren't exactly surprising: Hugh Laurie ("House"), Kyle Chandler ("Friday Night Lights"), Michael C. Hall ("Dexter"), Bryan Cranston ("Breaking Bad"), Jon Hamm ("Mad Men") and Matthew Fox ("Lost"). As much as the warmth and humor Kyle Chandler brings to Eric Taylor really does deserve recognition, and as much as Jon Hamm has grown in his ability to show how regret and longing figure into Don Draper's picture, somehow Bryan Cranston's depiction of the tortured, flinchy desperation of Walter White always feel like the pinnacle of dramatic acting on TV. Cranston brings so much restraint and suppressed frustration to Walter; he can demonstrate Walter's remorse and dread just by lifting an eyebrow. It's pretty tough not to give it up for Cranston again.

At last "Men of a Certain Age" gets some love in the supporting actor in a drama category! Andre Braugher really deserves this Emmy for his poignant take on a man facing down the indignities of aging. Braugher is such a transfixing actor, he drags the conflicted, almost-defeated heart of Owen into every scene. The man seems to have an ability to make himself sweat on cue -- and that's not to mention his incredible comedic timing. Of course we all love John Slattery as Roger Sterling in "Mad Men," and Terry O'Quinn has always shone as John Locke in "Lost," even when that show was unraveling at the seams, but Braugher is really the standout in this crowd.

Finally, we come to the outstanding drama series of the year, and must choose between AMC's "Breaking Bad," Showtime's "Dexter," CBS's "The Good Wife," ABC's "Lost," HBO's "True Blood" and AMC's "Mad Men." There are some fantastic shows in the mix here, but let's be honest: "The Good Wife" isn't quite unique enough to touch the best shows in this group, "Lost" was a huge disappointment in its last season and doesn't even belong in the running despite the provocative storytelling of its peak years, and the bouncy, delirious camp of "True Blood" doesn't deliver much larger meaning beyond the irresistible lure of doing V with your trashy werewolf pals. Even the grueling agony of "Breaking Bad" and the dark wit of "Dexter" have nothing on Matthew Weiner's exquisitely rendered portrait of fragile souls trapped in the lives of repressed longing. "Mad Men" is the best drama of the year, hands down.

Now we just have to see whether the academy will award the most remarkable shows and brilliant performances of the season. Will they get it all wrong? Did I get it all wrong, as far as you're concerned? Well, as Don Draper would say, "I'm not here to tell you about Jesus. You already know about Jesus. Either he lives in your heart or he doesn't."