The big tent of love

Writers from "The Daily Show," the Onion and "Conan O'Brien" explain the sordid and magical world of intercourse

By The Association for the Betterment of Sex 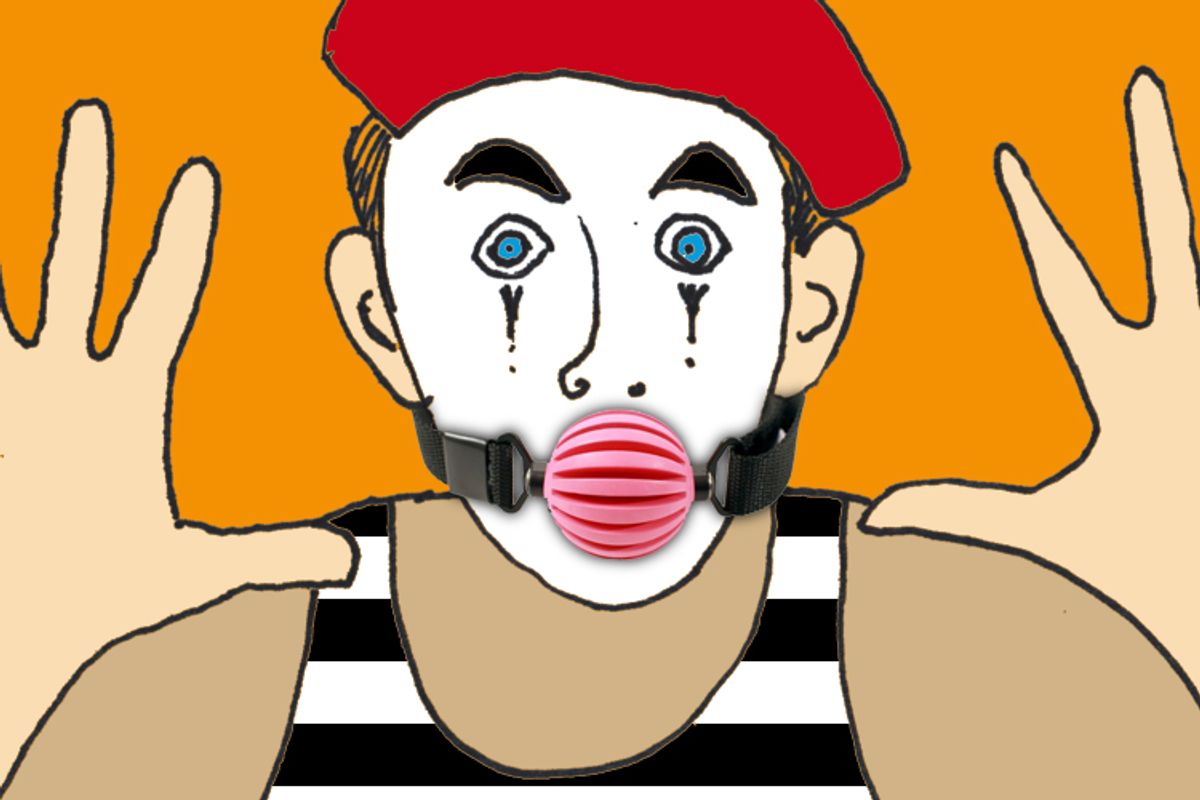 Most people are familiar with "vanilla" sex -- conventional non-freakiness that can be enjoyed by nearly everyone with waterproof flooring and stain-resistant slacks. You really could stop with that and be fine. Actually, nature kind of meant for you to stop there and be fine. But the human imagination is inexhaustible, and why should we expect the creative vision that invented astronaut ice cream and God to settle for standard penis/vagina fare? Once you have the basics down, you'll find there's a whole world of erotic variations for you to explore -- all it takes is an open mind and a junior-high-school (or equivalent) education.

Take fetishes, for example -- sexuality's big tent. Show a man with a shoe fetish a woman in high heels, and he will drop to his knees to kiss the patent leather. Remove the shoe, and a foot fetishist will jump in to worship every little piggy on that most intoxicating of extremities. Remove the foot and an acrotomophile stands ready to pay tribute to that heavenly absence, the amputation. In fact, there isn't a body part, inanimate object, or idea that someone hasn't found a way to eroticize -- one person's excuse to park in the handicapped spot is another person's masturbatory temple.

No overview of fetishes would be complete without a more thorough look at the most popular of them all: domination-and-submission. If you've ever been strapped to a crucifix and flogged for ejaculating before Mistress ordered you to, you're what's known as a submissive, the subservient partner in this sort of power-exploitation relationship. On the other hand, if you've ever found yourself in your customized dungeon, sipping from a champagne flute as you penetrate a client with a series of increasingly wicked dildos and RCA universal remotes, you're what's known as a dominant. Not sure which one you are? You'll know by the end of this story, sissy.

In short, with a little daring, sex doesn't have to be the stoic act of Depression-era penetration your grandparents constantly reminisce about. If you think you can handle something new, let us show you how.

PART ONE: "LITTERBOXING" AND OTHER HIGHLY RAREFIED SEXUAL FETISHES

Were it not for the Internet's extraordinary global reach, less common fetishes such as litterboxing (i.e., forcing one's cat to make prolonged eye contact while it performs its toilet, and then pleasuring oneself to the feline's expression of withering shame and humiliation) would never have experienced the popularity they enjoy today.

Although fetishism has become a largely accepted form of sensual expression, some rarefied sexual proclivities continue to lurk quietly along the shadowy fringes of human sexual behavior. There they remain, hidden, until some enterprising teenager in a high-school computer-science lab distractedly searches Google for "Howie Mandel + hand job + back of rented Geo + Baltimore + Band-Aid."

In order to find the absolute rarest of sexual fetishes, ABS has plumbed the depths of human perversion -- from ultra-private Internet message boards to the "staff picks" section of a German Barnes & Noble. What we discovered astounded even us. Some of these fetishes have only a handful of practitioners; some have none. But who knows -- any of these uncommon sexual obsessions could find its way into the mainstream and perhaps one day become as widely popular as a garden-variety Cabbage Patch Doll + miniature-prom-dress fixation (huge in Pennsylvania Dutch country).

These fetishists seek a particular pleasure in rented halls and church basements, refusing themselves sexual release until the moment someone signals a winning card by shouting "Bingo!" (More orthodox practitioners will prolong their relief further, timing their orgasm only after the bingo win has been confirmed by a church officiant, preferably flown over from the Vatican.)

These finicky fetishists are repelled by all forms of physical intimacy, and can only achieve sexual release by watching someone else roll their eyes and sarcastically mime a hand job.

PART TWO: DOMINATION AND SUBMISSION -- TASTE THE WHIP! GO ON, TASTE IT!

Walk up to someone and ask them to describe the first vivid scenario that comes to mind when they hear the word fetish, and they'll probably describe a stern, corseted woman administering some sort of punishment to a man kneeling at her boots, leashed to a post or manacled to an oversize houseplant. And with good reason. So powerful, so iconic is the dynamic between a mistress and her thrall that domination-and-submission is a fetish that's truly a category in its own right. But if you don't know what you're doing, it's all too easy to find yourself among the thousands admitted to the hospital each year with conditions such as tether burn or obedience rot, both of which can easily turn you against domination-and-submission forever. For the information you require, keep reading.

A primer for the aspirant Little Lord Fauntleroy:

You've just had sex. You've duly ejaculated inside the mutually agreed-upon orifice, and your partner, in full cuddling mode, moves in to spoon -- and yet, you feel strangely unfulfilled. Why didn't she call you a worthless insect? Did she fail to electrocute your prostate, or were you just not paying attention? And the meat-tenderizer hammers -- where were all the damn tenderizer hammers? If you find yourself mulling over these questions, you're probably not having your submissive needs met. You may want to explore your options for suffering.

An encounter with a mistress usually takes one of three forms:

In what's otherwise known as lifestyle slavery, the 170-pound pile of obedience you call a life belongs to Mistress 24/7. If she wakes you up at 4:00 a.m. because she wants you to give her a pedicure with a cactus stuffed in your mouth, you'd better be on the first train. If she texts you in the middle of a board meeting because it's time to shoot an indescribable YouTube video involving Raggedy Ann makeup and an inverted bowling pin, meeting adjourned. This is the real-deal immersive experience. Only true thumb-sucking weaklings need apply.

Of course, long-term subservience requires tremendous chemistry between the mistress and her submissive -- but who has time to go searching for that? We work nights, weekends and straight through our lunch breaks now, and the days when we could duck out of the office for a quick human-trampoline session are long gone. Enter speed submission. Launched in the 1990s, speed sub is a unique way for would- be submissives to sample the abuse from a variety of potential dominatrices. In a typical speed-sub event, equal numbers of men and women spend just a few minutes together before a bell rings and the man crawls to his next encounter. These encounters are entirely free-form and range from verbal belittlement to an abbreviated catheterizing session. At the end of the night, both men and women are given a card. The women mark an X next to the names of men they might consider receiving unflagging tribute from; the men's cards are immediately ripped apart and tossed in their faces. Hot appetizers and a house cocktail are typically included in the registration fee.

"Sex: Our Bodies Our Junk" is available from Broadway Books. "The Association for the Betterment of Sex" is: Scott Jacobson, writer from "The Daily Show"; Todd Levin, writer from "Late Night With Conan O'Brien"; Jason Roeder, humor writer whose work has appeared in The Onion, New Yorker and on Salon; Mike Sacks, humor writer, editor at Vanity Fair and author of "And Here's the Kicker: Conversations with 21 Top Humor Writers"; and Ted Travelstead, actor and comedy writer.


The Association for the Betterment of Sex

MORE FROM The Association for the Betterment of Sex