Sexual relationships are shockingly common between men and young boys, thanks in part to women's inequality 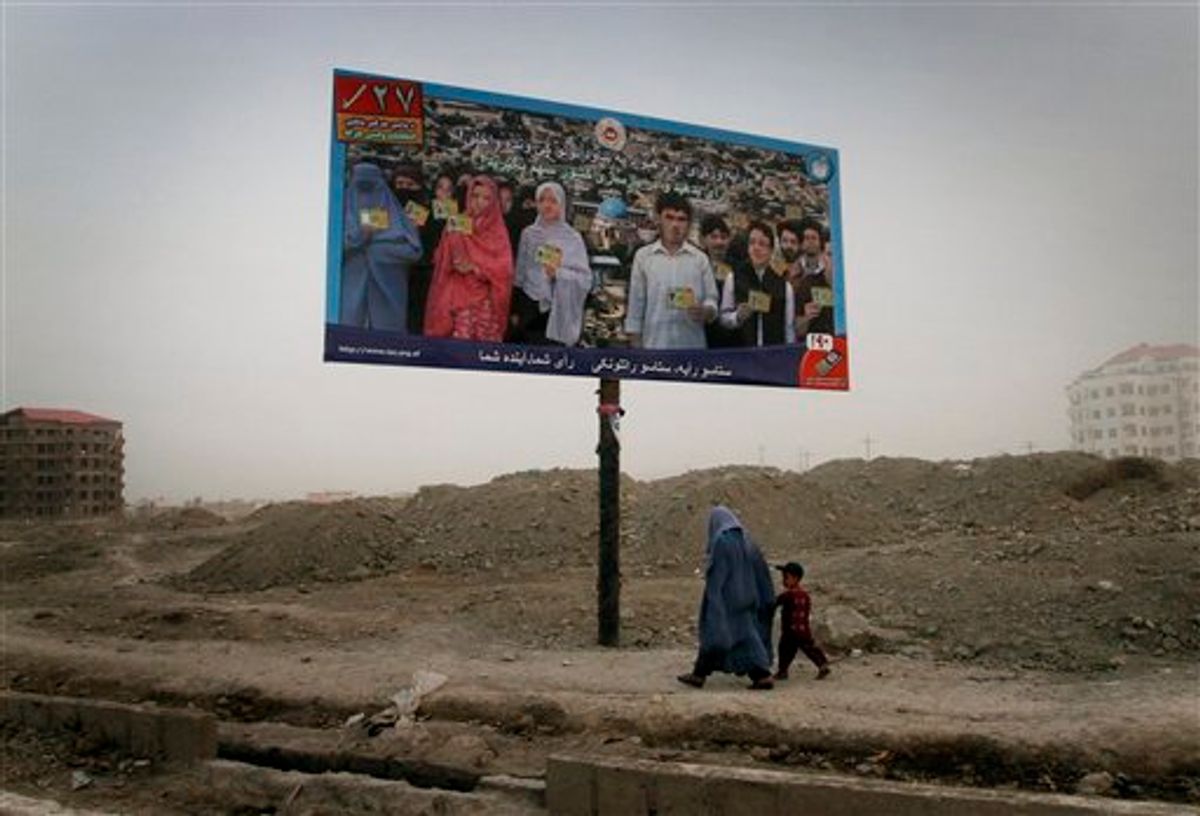 In this Monday, Aug. 23, 2010 photo, an Afghan woman walks with her son under an election billboard asking people to vote for upcoming parliamentarian election in Kabul, Afghanistan. Afghans will go to the polls for parliamentary elections in September. After a fraud-ridden presidential election last year that nearly undermined President Hamid Karzai's legitimacy and international support, the Sept. 18 parliamentary ballot is being watched closely as a test of whether the Afghan government is serious about reform. (AP Photo/Musadeq Sadeq) (AP)
--

As though we needed more reason to feel uneasy about the situation in Afghanistan, a piece in Sunday's San Francisco Chronicle detailed the shocking prevalence of child sexual abuse in the southern part of the country. Joel Brinkley, a journalism professor at Stanford University, explains that, according to a report commissioned by the Defense Department, many Pashtun men (half of the tribal members in Kandahar, according to some accounts) develop sexual relationships with boys as young as 9.

The technical term for these men is "bacha baz," which translates to "boy player" (although "pedophile" works just as well). In popular weekly events, "young boys dress up as girls, wearing makeup and bells on their feet, and dance for a dozen or more leering middle-aged men who throw money at them and then take them home," writes Brinkley. I could spill several hundred more words relaying fascinating details about this centuries-old cultural phenomenon -- but for our purposes on this here lady blog, the most interesting element of the story is the theory of why and how this practice came to be. Brinkley explains:

Sociologists and anthropologists say the problem results from perverse interpretation of Islamic law. Women are simply unapproachable. Afghan men cannot talk to an unrelated woman until after proposing marriage. Before then, they can't even look at a woman, except perhaps her feet. Otherwise she is covered, head to ankle.

It isn't just that women's bodies are kept under lock and key. Men are also taught that women, what with their monthly curse, are "'unclean' and therefore distasteful." Brinkley writes: "That helps explain why women are hidden away -- and stoned to death if they are perceived to have misbehaved." It also helps explain why boys are dressed up as girls for men's sexual entertainment: it allows for titillation without the female threat of contamination and corruption.

"Even after marriage, many men keep their boys, suggesting a loveless life at home," Brinkley explains. The man-boy relationships are seen as an exception to the Islamic ban on homosexuality, since there isn't "love" involved. As a local saying goes: "Women are for children, boys are for pleasure." There lies the justification for a cycle of sexual abuse spanning several generations. There are no easy words of wisdom here, but I will say that this seems an especially powerful reminder that women's inequality hurts more than just women.