Glenn Beck, Park51 and the politics of hallowed ground 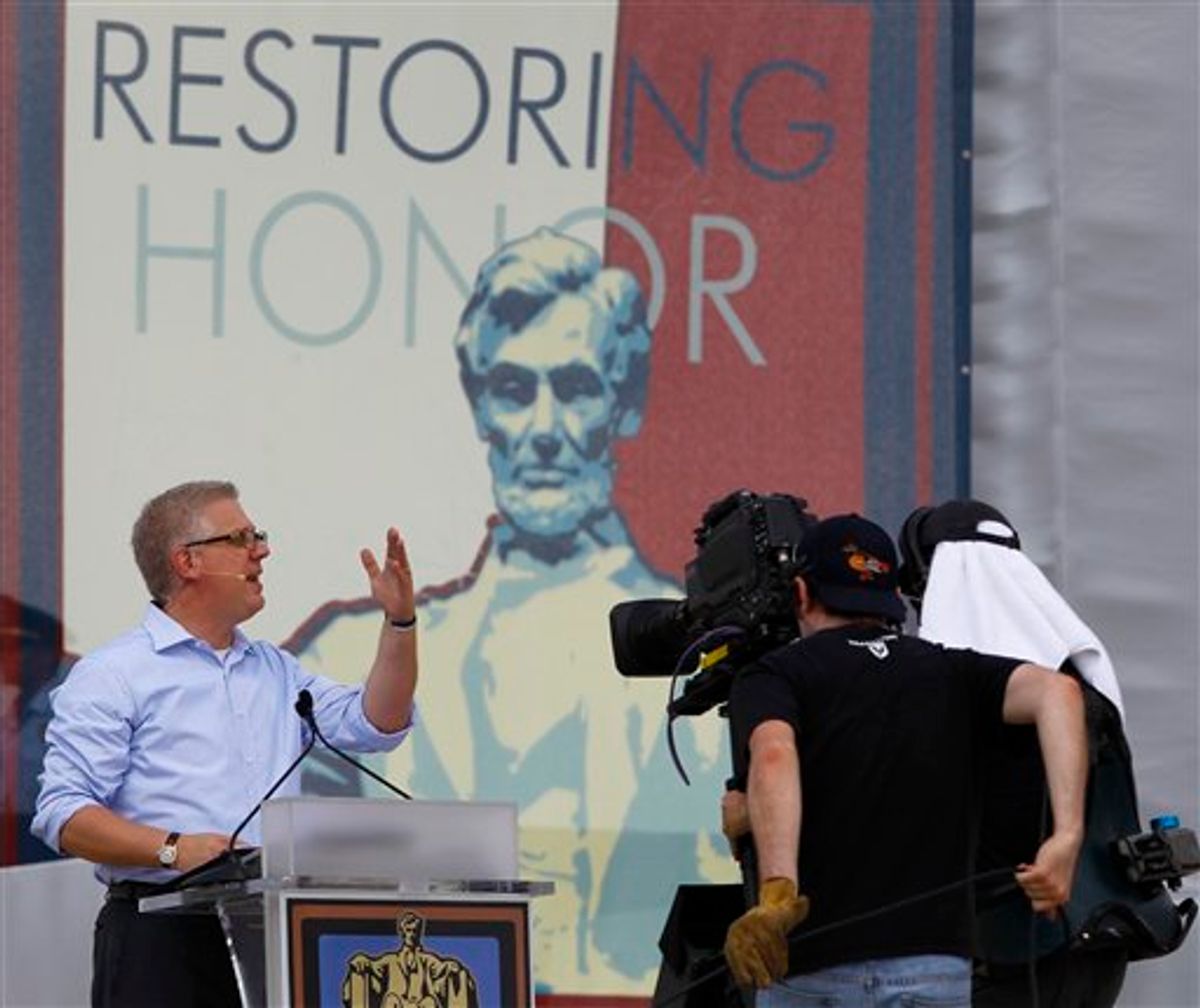 Glenn Beck speaks as a television camera moves around him as the "Restoring Honor" rally in front of the Lincoln Memorial in Washington, Saturday, Aug. 28, 2010.(AP Photo/Alex Brandon) (AP)
--

"Do not come any closer," God told Moses at the burning bush. "Take off your sandals, for the place where you are standing is holy ground."

Sometimes it seems like everyone in American politics is playing God. For the past few weeks, it's been the Islamophobic right, busy declaring that lower Manhattan (and maybe Midtown too!) is holy ground, upon which Muslim shoes must not tread. (Not that they wear shoes in the mosque.) Now, it's us on the left, outraged as we are at the appropriation of the Washington Mall -- and the footsteps of the canonized Martin Luther King -- by Glenn Beck and Sarah Palin.

So what makes for hallowed ground? The New York financial district is apparently too holy for a mosque, but not for strip clubs and bodegas and the rest of the features of a Manhattan neighborhood. (Nor, for that matter, does it seem to be too sacred for the financiers themselves. Aren't they the real bad neighbors?) And Palin and Beck and I could all agree that the Lincoln Memorial has transcendent symbolic importance. But the way it’s important to me and the way it’s important to them are different. If they thought their Saturday rally was about using the legacy of Lincoln and King to “restore honor” to America, it seemed to me to be about exploiting that legacy to smuggle in a different meaning about our history and national character. In other words, sacred places aren’t sacred in the same way to everyone. They’re contested terrain; when we see significance in a patch of dirt, we’re saying something about the meaning of past events there. And when we say something about the meaning of past events, we are always, truly, arguing about the present.

L.P. Hartley famously wrote that the past "is a foreign country. They do things differently there." It's tempting to say that for the Tea Partiers, this isn't true; their past is just America. But that's not quite right, because it's a kitschified, fictitious version: Americana-land. It's a place where everyone was in the right, and everyone got along, back when everything was sepia-toned and men were men and the whole town played baseball on Saturday mornings.

This is what Martin Luther King and the Civil Rights movement mean to the Tea Party folks who got together at the Mall on Saturday. It's what Abraham Lincoln and the Civil War mean too, and George Washington and the American Revolution. Utah GOP Rep. Jason Chaffetz described the attendees as "good old-fashioned Americans." For Palin, Washington and Lincoln and King are distinguished by their identical, ironclad faith in God, and their "steel spines." Beck himself has said, of himself and his followers, "We will reclaim the civil rights movement." This cuts straight against the grain of history: white conservatives were of course the bedrock of opposition to civil rights. No matter, though, to the Fox showman. "We will take that movement because we were the people that did it in the first place." This lost heroic past was somehow conveniently free of villains.

Unfortunately, this is a myth of white supremacy. The right wing is busy evacuating the real, troubling meanings from important historical sites, and replacing them with legends of self-flattery.

This is an ignoble tradition that began after the Civil War. David Blight, one of our leading historians of the era, has shown how the process of reconciliation between North and South entailed an agreement that what the war was about was the valor of the soldiers , the romance of blue and gray. Countless memorial events and battlefield reunions featured veterans shaking hands. At newly-sacred places -- cemeteries, battlefields and memorials that still dot the South and the border states -- white Northerners and Southerners forgave one another and dismissed the meaning of the bloodletting. "I think that we were both right and both wrong," wrote one soldier, capturing the essence of the moment. "Life and history, and right and wrong and minds of men look out of more windows than we used to think! Did you never hear of the shield that had two sides and both were precious metal?"

The true, central catalyst of the war, which lent it its moral meaning -- that is, slavery -- was pushed out of mind. Even Northerners came to believe in the myth of the South's noble, doomed "Lost Cause." Human bondage, wrote former Confederate President Jefferson Davis, was "in no wise the cause of the conflict, but only an incident." Northerners proved willing enough to go along, and to transmute their past into an ennobling myth; there's a reason that people in both regions, even now, try to deny what the war was about, or to say that slavery was going out on its own anyway, or that the Confederacy had black soldiers. "Gone With the Wind" and "Birth of a Nation," which in one way or another dramatize this argument, were enormous national hits for just this reason as well. Reconciling white people meant writing out black people. White Americans looked at their black countrymen and said, in effect, "This is our story now, not yours."

This is what's just happened at the Mall. Nobody was in the wrong during the civil rights years; King was a happy saint in the American tradition, not a dangerous radical.

The story with the hallowed ground of New York City is a little more complicated, but not too different. The real meaning of the disaster on September 11 -- the way violence begets violence and fanaticism begets fanaticism, the way geopolitical maneuvering makes victims of ordinary people -- is all gone. In its place is the vacuous sanctimony that it the place is "hallowed," but all that seems to mean is that it is not open to Muslims.

Appropriately enough, just a few feet behind Palin's podium on the Lincoln Memorial are Lincoln's own words, on just this topic, carved into the marble. At Gettysburg cemetery, he warned, "We can not dedicate -- we can not consecrate -- we can not hallow -- this ground."

What is the meaning of the tragedy of September 11 supposed to be, that makes the place holy? For what purpose did those people die? And who are Sarah Palin and Newt Gingrich to decide? What about the civil rights revolution? If conservatives can appropriate a movement that their ideological ancestors universally opposed, then surely, like the reunionists of the 19th century, they have warped its meaning.

Lincoln's lesson at Gettsyburg was that, while the willingness of Union soldiers to die sanctified the battlefield, so did the cause itself: the "new birth of freedom," the end of slavery. His words read now like an admonishment against sanctimony and narcissism. Don’t make this about you, he seems to say. "It is for us the living, rather, to be dedicated here to the unfinished work which they who fought here have thus far so nobly advanced."

In classic Tea Party fashion, Palin and Gingrich and Beck have been exaggerating their numbers. But they're padding the figures with an army of the dead, unwillingly conscripted. That's not just dishonest. It's ghoulish, and it's racist to boot. African-Americans and Muslim-Americans are being treated like supporting characters, not capable of their own citizenship, their own causes, their own struggles, and their own history. In the temples of Americana being built, the parts of our national past that don't belong to the white, conservative population are being sacrificed.