Tea Party out for fresh blood in Delaware, N.H.

Is Rep. Mike Castle about to become the next Lisa Murkowski? 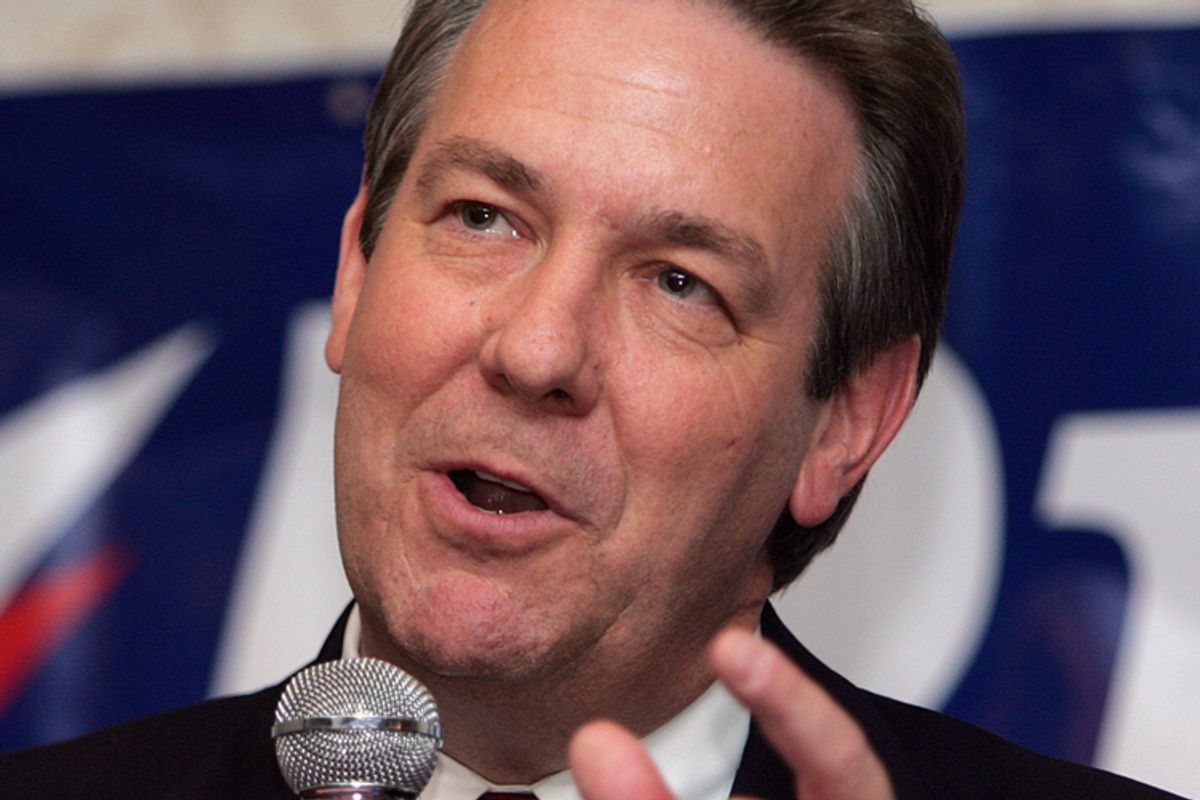 The Tea Party may not be quite done complicating the GOP 's chances of winning back the Senate this fall. In primaries in several states this year, the party's restive base -- a.k.a. the Tea Party -- has united to knock off establishment-backed candidates, nominating insurgents with dicey fall prospects. Sharron Angle in Nevada and Rand Paul in Kentucky are prime examples.

And the past two days have brought two fresh reminders that more insurgents could still sneak through.

In Delaware, the news is that the Tea Party Express -- whose $600,000 ad campaign helped key Joe Miller's apparent upset of Sen. Lisa Murkowski in last week's Alaska GOP primary -- is set to launch a TV and radio campaign on behalf of little-known Christine O'Donnell, who is running against longtime Rep. Mike Castle in a September 14 Senate primary. To date, the contest has attracted scant media attention (and polling), and it's been widelt assumed that Castle, who served eight years as governor before claiming the state's lone House seat in 1992, would prevail with ease.

But as last week's Alaska jolt demonstrated, it's not always easy to see these Tea Party upsets coming, and in Delaware the rough formula exists: an establishment favorite -- Castle is among the most moderate Republicans in the House -- who currently holds statewide office facing a right-wing outsider with some impressive conservative credentials (and now, thanks to the Tea Party Express, with some valuable outside help).

The small size of the GOP primary universe in Delaware could help O'Donnell, too, and if she does somehow win, it would severely complicate the GOP's Senate math. It has been assumed all year that Castle would be the state's next senator: The Democrats' biggest name, Beau Biden, backed out, and polls have consistently shown Castle comfortably ahead of the Democrat who did run, Chris Coons.  But O'Donnell would be a different matter. The same Republican-friendly (this year, at least) independent voters who are so comfortable with Castle might think diffrently of an right-wing insurgent with impeaccable Tea Party credentials. Just as Angle's extremism has given Harry Reid his only chance at surviving in Nevada, O'Donnell would present Democrats with their best -- and probably only -- bet in Delaware.

The rough formula also exists in New Hampshire, where on Sunday the state's largest newspaper, the Union Leader, endorsed insurgent Ovide Lamontagne, one of four Republicans running in the September 14 primary for the seat now held by Judd Gregg. Lamontagne's bid has seemed hopeless for months, with polls showing him running far behind state Attorney General Kelly Ayotte, the state and national GOP establishment's preferred candidate.

But the Union Leader's decision could provide Lamontagne with a spark. The fiercely conservative paper is unusually influential in right-wing circles and it tends to promote its chosen candidates more aggressively than other newspapers do. Plus, Lamontagne has been in this same position before. Back in 1996, he waged an insurgent bid for governor, running far to the right of Bill Zeliff, a moderate three-term congressman with strong establishment credentials. At this point in that campaign -- three weeks before the primary -- Zeliff led Lamontagne 46 to 19 percent. But as voters focused  on the race after Labor Day, Lamontagne surged, boosted by the Union Leader's loud support (and its equally loud condemnations of Zeliff). In the primary, Lamontagne prevailed, 48 to 43 percent.

That example is instructive because of what happened in November. Running against a Republican nominee who could easily be caricatured as an extremist, Democrat Jeanne Shaheen positioned herself as a tax-phobic moderate and won over the state's culturally moderate independent voters. She led wire to wire and posted a comfortable winning margin. Granted, the circumstances were ripe for a Democratic win in New Hampshire that year, with Bill Clinton cruising past Bob Dole by ten points at the top of the ticket. Shaheen may well have beaten Zeliff, too -- but the task wouldn't have been nearly as simple.

If Lamontagne were to knock off Ayotte on September 14, Democrats would have a similar opportunity. Polls have consistently shown Ayotte leading Rep. Paul Hodes, the presumptive Democratic nominee. With Ayotte as their candidate, the GOP is very likely to hold onto the seat, given the national climate. But a Hodes-Lamontagne race would be a far different proportion. Like Harry Reid in Nevada and Jack Conway in Kentucky, Hodes would have an opening to make the race, at least in part, a referendum on his opponent's extremism. The culturally moderate independents who are ready to swing back to the GOP in New Hampshire this year might get cold feet. The national implications are serious for Republicans: A loss in New Hampshire, which would cost them a seat they already have, would make the math of a Senate takeover nearly prohibitive

To be sure, it's possible the Union Leader's decision won't have much of an impact -- that the gesture was mainly an obligatory one and that fomenting a conservative backlash against Ayotte will be far more difficult than it was with Zeliff. For all of the paper's success in shaping GOP primaries, it has has some real clunkers too, like its 1988 endorsement of Pierre S. duPont IV for president. Ayotte may still win easily on September 14.

Similarly, O'Donnell's camapign against Castle may end up going nowhere. Not every moderate, establishment-backed Republican has faced primary drama this year: Mark Kirk in Illinois, for instance, had no trouble securing the GOP nod back in March. But in the wake of Miller's out-of-nowhere (apparent) triumph, Delaware and New Hampshire are worth watching a little more closely these next few weeks.