Obama just doesn't get it

Unemployment is a catastrophe, the recovery is stalling, but the president says his priority is "debt and deficits" 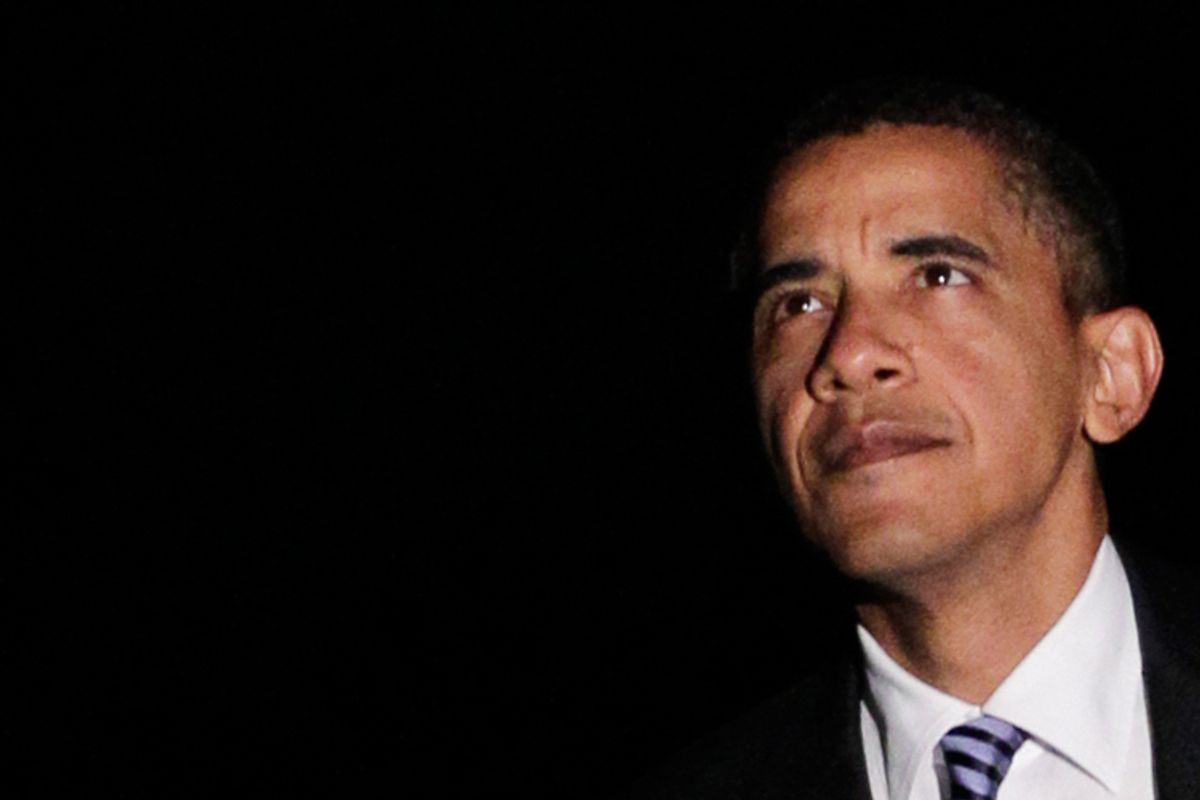 I have underestimated President Obama more than once, starting when he was candidate Obama. At a few points when his campaign seemed shaky -- the Jeremiah Wright fiasco, the serial defeats in Ohio, Pennsylvania, Kentucky and more at the end of the primary season; the post-Palin surge after the GOP convention -- he turned things around, becoming a tougher candidate better able to reassure voters he understood their anxieties about the country, and that he would fight for their future.

So I hope I'm wrong this time. But even after his Martha's Vineyard vacation, and what he described to NBC's Brian Williams Sunday as days of reading, thinking and relaxing, here's what Obama said were his priorities for doing his "job" for the rest of his term:

He mentions debt and deficits first, and emphasizes "private investment" as the way "to make the recovery stronger"? These disappointing remarks came the same day former Clinton economic advisor Laura Tyson declared with convincing detail, "Why We Need a Second Stimulus" in a New York Times Op-Ed, while the paper's main editorial, "Waiting for Mr. Obama," sounded a similar alarm about the economy. Running down the list of truly terrible recent economic news -- stubbornly high unemployment, weaker growth than projected, a surprising new drop in housing sales -- the paper suggested: "If President Obama has a big economic initiative up his sleeve, as he hinted recently, now would be a good time to let the rest of us in on it."

But so far, there doesn't appear to be one.

That Democrats are in trouble across the country as the midterm showdown nears is bad enough, for those of us who think the party has the best solutions to the global economic mess. What's worse is that, at the national level at least, they seem to be going down without much of a fight over their core principles. The New Republic's John Judis contrasted Obama and the Democrats' woes in 2010 with Ronald Reagan and the GOP's struggles in 1982, when a stubborn recession was depressing Reagan's approval ratings and portending midterm doom for his party. Did Reagan begin to parrot the concerns of his critics in the other party, the way Obama is now bleating about "debt and deficits"? Quite the opposite: As Judis explains, Reagan and his team called for voters to "stay the course" and blamed the nation's problems  on Democratic overspending. "We are clearing away the economic wreckage that was dumped in our laps," Reagan boldly declared. And while Republicans were expected to lose up to 50 House seats, they lost only 26 and broke even in the Senate. Equally important, Reagan's strong messaging kept voters optimistic he could eventually prevail. Just before the election, Judis notes, with unemployment still soaring, a CBS News/New York Times poll found that 60 percent of likely voters believed Reagan's economic program would eventually turn things around.

Given the mixed messaging coming from the White House, it's not surprising Obama is seeing no such optimism from voters this year. As Tyson complained in her Times Op-Ed calling for a second stimulus, "Our national debate about fiscal policy has become skewed, with far too much focus on the deficit and far too little on unemployment." Unfortunately, it's the president himself who's doing much of the skewing.

This is disastrous, for the Democrats and for the country. We are not out of the Great Recession, and as more economists warn of a double dip, the current economic crisis could ultimately be as cataclysmic as the Great Depression. And while liberal economists still lament Franklin Delano Roosevelt's decision to prematurely focus on the deficit and tighten spending in 1937, imagine if he'd done it in 1934 instead? Unfortunately, the Obama team never crafted a program or political message that was equal in ambition to the scope of the economic mess they inherited. Even if the initial stimulus had to be smaller than necessary to win 60 votes in the Senate, Obama and the Democrats should have said so, and promised a second bill if needed. Again, even if they lacked the votes to pass such a bill, they'd be promoting a coherent economic analysis -- if demand remains dangerously weak, government must stimulate the economy to create demand in a disaster; in a "jobless recovery," government must step in to save and even create jobs -- that might make sense to suffering voters, if not in time for 2010, then perhaps for 2012.

It's been written before: The Obama team seems to think 2012 will take care of itself, as long as they burnish that shining Obama "brand," which requires reaching out to Republicans and independents and ignoring the pesky left, with its old culture-war grudges and its subversive demand for greater economic fairness. I've heard some smart folks speculate that the White House may even welcome a Republican takeover, the better to "let Obama be Obama," and continue to play out his fantasy of being a Democratic Ronald Reagan, creating a generation of what he used to call "Obamacans" and realigning politics for his lifetime.

If anyone in the White House still believes that, they are delusional. If Republicans win back the House, they will tie up the president in subpoenas and bogus investigations faster than you can say Darrell Issa. The president hasn't created "Obamacans"; instead he's created a phenomenon best described as "Obamacan't." And still he cozies up to Republicans like Alan Simpson, who's determined to slash Social Security and its "310,000,000 tits" (in how many ways was Simpson's statement wrong? Probably close to 310 million). And the problem with Obama's milquetoast approach to the economy isn't just political: If Republicans get to reverse or obstruct the Democrats' inadequate but promising steps forward on healthcare and financial reform, while slashing government spending and extending the disastrous Bush tax cuts, we may yet see an economic collapse to rival the Great Depression -- the one that an earlier generation of brave and visionary Democrats vowed would never happen again.

It is too late for anything Obama says or does to materially improve the economy, or ease economic suffering, in time for November. In an e-mail today to Politico, Time's Mark Halperin laid out the list of Democratic problems that he says could lead to the party losing up to 60 seats in the House (that's still unlikely): "the enthusiasm gap, the state of the economy, the failure to materialize of a lot of what Democrats were counting on (health care law getting more popular, and 'recovery summer' taking hold)." The only thing on Halperin's list Obama and the Democrats have any real control over now is that so-called enthusiasm gap, the fact that Democrats are much less excited about the November election than Republicans are. Trust me, watching the president continue to mouth Republican platitudes about "debts and deficits" and a recovery built on "private investment" is only going to increase that gap, not narrow it.

Finally, Paul Krugman (long a critic of the president's economic centrism) lays out the GOP "witch-hunt" against the president, showing how it's similar to that faced by Bill Clinton, but worse:

Anyone who remembered the 1990s could have predicted something like the current political craziness. What we learned from the Clinton years is that a significant number of Americans just don’t consider government by liberals — even very moderate liberals — legitimate. Mr. Obama’s election would have enraged those people even if he were white. Of course, the fact that he isn’t, and has an alien-sounding name, adds to the rage.

By the way, I’m not talking about the rage of the excluded and the dispossessed: Tea Partiers are relatively affluent, and nobody is angrier these days than the very, very rich. Wall Street has turned on Mr. Obama with a vengeance: last month Steve Schwarzman, the billionaire chairman of the Blackstone Group, the private equity giant, compared proposals to end tax loopholes for hedge fund managers with the Nazi invasion of Poland.

And powerful forces are promoting and exploiting this rage. Jane Mayer’s new article in The New Yorker about the superrich Koch brothers and their war against Mr. Obama has generated much-justified attention, but as Ms. Mayer herself points out, only the scale of their effort is new: billionaires like Richard Mellon Scaife waged a similar war against Bill Clinton.

Meanwhile, the right-wing media are replaying their greatest hits. In the 1990s, Mr. Limbaugh used innuendo to feed anti-Clinton mythology, notably the insinuation that Hillary Clinton was complicit in the death of Vince Foster. Now, as we’ve just seen, he’s doing his best to insinuate that Mr. Obama is a Muslim. Again, though, there’s an extra level of craziness this time around: Mr. Limbaugh is the same as he always was, but now seems tame compared with Glenn Beck.

Krugman ends his column this way:

If I were President Obama, I’d be doing all I could to head off this prospect, offering some major new initiatives on the economic front in particular, if only to shake up the political dynamic. But my guess is that the president will continue to play it safe, all the way into catastrophe.

The entire Brian Williams interview, sadly, confirms Krugman's pessimism. Apart from accepting too many Republican prescriptions for the economy, Obama also waxes vague and platitudinous when asked about the extreme forces he's up against, like birthers, Beck and Limbaugh. He talks about "strong opinions" and "process" and "debate" all being good for the country. He tells Williams: "And there's -- you know -- a lot of folks who have very strong opinions about various issues. That process helps guide us in a better direction. That's part of the reason why this is a more dynamic society than others. This is one that is adaptable. That can change. That can recover. That is resilient."

In general, I share Obama's optimism about our country, but I think he sounds unprepared for the fight he's in. Repairing our economy and our political system requires a president who understands what he's up against. The forces of great wealth will use everything in their power to prevent fundamental change in this country, and one of their favorite tactics has always been "divide and conquer," propping up charlatans like Beck to distract people from the rate at which they're widening the gap between rich and poor. That's one of the things I worried about, watching the Obama phenomenon in 2008: that he believed his own rhetoric about bipartisanship and underestimated the right's determination to defeat even centrist efforts at leveling the playing field. Unfortunately, I'm starting to think I was right about that one.