Is Glenn Beck mobilizing the religious right for November? 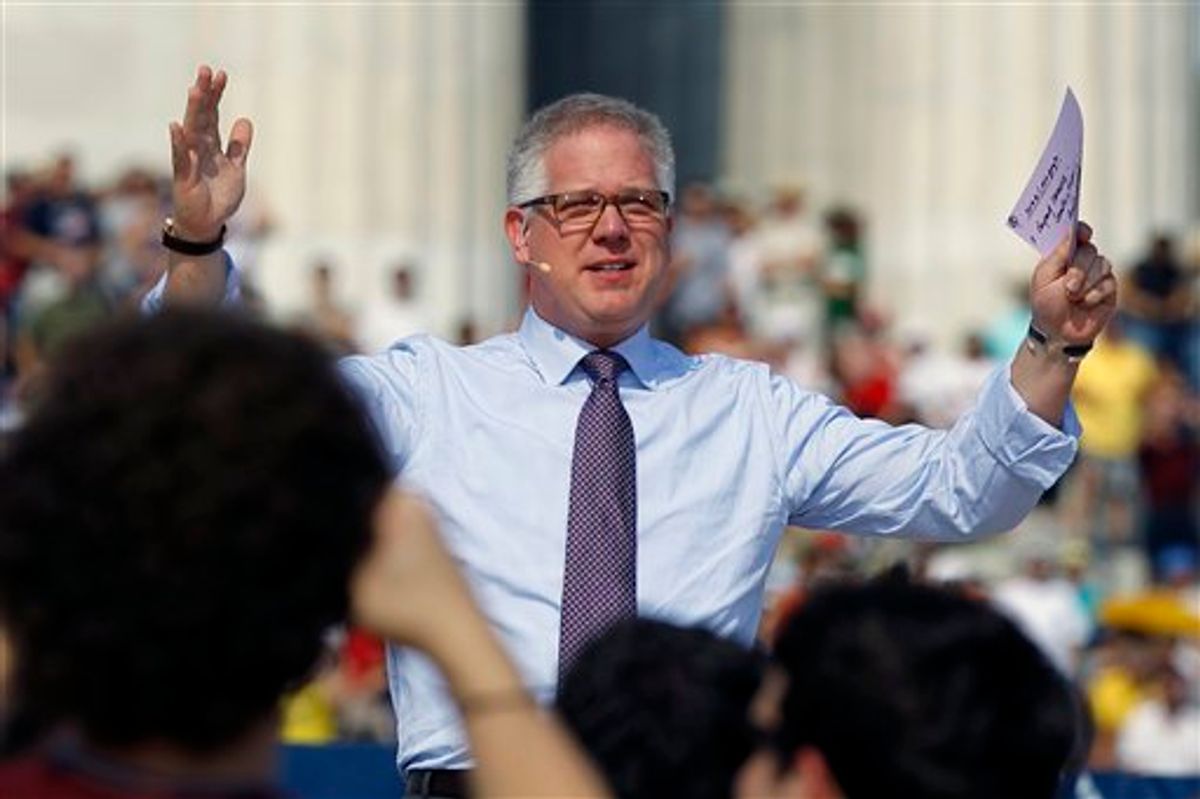 If Glenn Beck's Washington extravaganza seemed strangely empty of political content, filled with vacuous pieties and fetishes rather than protest, then perhaps it should be seen as the opening act in a renewed campaign to assert the power of the religious right. A series of four mass prayer events, featuring many of the most prominent figures in the Republican Party's theocratic wing, will occur between Labor Day and Election Day, starting with an arena rally in Sacramento, Calif., and ending with perfect symmetry on the steps of the Lincoln Memorial.

Behind these events, under the rubric "Pray and A.C.T.," is Newt Gingrich's organization, Renewing American Leadership, although the frontmen for this particular initiative are former Watergate conspirator Charles Colson and evangelist Jim Garlow, who now works for Gingrich. Endorsers include top evangelical and political leaders such as Focus on the Family's Jim Daly, who took over from James Dobson; Princeton University professor Robert George; Fox News host and former presidential candidate Mike Huckabee; Cindy Jacobs of the Generals of Intercession; Southern Baptist leader Richard Land, who attended the Lincoln Memorial rally at Beck's invitation; Tony Perkins of the Family Research Council; and Tim Wildmon, who is taking over the American Family Association from his father, Don. Also among the endorsers of Pray and A.C.T. or Renew America are Alveda King, the niece of Martin Luther King Jr., who was featured at the Beck rally, and David Barton, the pseudo-academic who argues that America was founded as a "Christian nation" and is often touted by Beck on television (and who headlined Beck's "Divine Destiny" pre-rally Friday evening at the Kennedy Center in Washington).

The tenets of Pray and A.C.T. are straightforward and traditional: opposition to gay marriage and any manifestation of tolerance for homosexuality; opposition to reproductive rights for women, especially abortion; and opposition to anything that violates "religious liberty" as defined by Christian ultras (which evidently doesn't cover the right to construct an Islamic center on Park Place in Manhattan).

According to the Pray and A.C.T. website, prayer is vital but not sufficient to becoming "authentically Biblical," which requires "voting in all elections only for candidates who affirm the sanctity of life in all stages and conditions, the integrity of marriage as the union of one man and one woman, and religious liberty and respect for conscience ... The foundational moral principles ... must become a guiding force in every local, state and national election -- year after year -- including this year's election."

If that isn't clear enough, the schedule for Pray and A.C.T.'s pre-election crusade starts with a sports arena prayer service, led by the radical theocrat Lou Engle, and then moves on to a countdown event at a church in Washington on Sept. 12, followed by an official launch event in Washington on Sept. 19, concluding with the Lincoln Memorial rally on Oct. 30 -- two days before Election Day.

Fred Clarkson places Pray and A.C.T. in recent historical context on Talk2Action, discusses why it marks an important moment in right-wing politics, and explains what may be different this year:

The Christian Right has often sought to stay the hand of God, angry with our failings as a nation, by 'standing in the gap' at large prayer rallies and pleading for mercy. They have made a special point of doing so in the run up to national elections since 1980, praying for godly government and righteous candidates, and this year is no exception. The beneficiaries are almost always Republicans and this year is probably no exception in that regard as well. But there is also an ominous element that mostly transcends parties and is on vivid display as we enter the fall campaign season.

On Labor Day weekend, Lou Engle, head of the fiery neo-Pentecostal group, The Call, is leading a worship service in a sports arena in Sacramento, California and a "solemn assembly" at the state Capitol the next day. These events were initially billed as a tenth anniversary of The Call's first youth rally on the national capital mall which drew a claimed 400,000 people. Since then, the Sacramento event has been repositioned as the kick-off of a major Christian Right fall political campaign initiative. Engle says it will be the "hinge of history" opening the door to "the greatest awakening" and "returning our nation to its righteous roots."

There are several important dimensions of this effort. One is that this is an effort at reaching and mobilizing evangelical young people into Republican politics, particularly in California; another, is that it represents a new stage in the long term cooperation between conservative Catholics, fundamentalists and the neo-Pentecostals. And finally, the militant rhetoric of Engle's armies of activists is escalating, and their organizational infrastructure seems to be increasing, especially in cyberspace.

... The eminence grise of this initiative appears to be former House Speaker Newt Gingrich, whose organization Renewing American Leadership (ReAL) is apparently the force behind a series of Christian Right events being organized under the rubric of "Pray & Act." This is politically important, but as Gingrich's role becomes more public, it may also become morally dissonant, since Gingrich is well known (and has been recently highlighted in the news) as a thrice-married serial philanderer. This certainly makes him an unlikely guide for a religious political movement whose leaders believe that the fate of America hinges on the health of heterosexual marriage. (His recent conversion to Catholicism not withstanding.)

…At this writing, details are still emerging, but the list of Religious Right leaders involved is impressive, and their intention to lead people from a state of fervent prayer to acquiring state power is unambiguous.

These events may fairly be seen in the context of the ongoing transition of the Religious Right as the founding generation of movement leaders passes from the scene. R.J. Rushdoony, Jerry Falwell, D. James Kennedy, Bill Bright, and John Giminez (among others) have died. Pat Robertson, Don Wildmon, James Dobson, and Beverly LaHaye are in varying stages of passing the torch; and each of their designees are coalescing via Pray & Act, which in turn is appealing to and seeking to register young people to vote.

Clarkson's analysis of the deeper Dominionist and Christian Reconstructionist roots of this latest manifestation is troubling, not least because Lou Engle, who is kicking off the election-year festivities in Sacramento, has given tacit support to the execution of homosexuals in Uganda, among other extremist positions. The entire post is well worth reading.