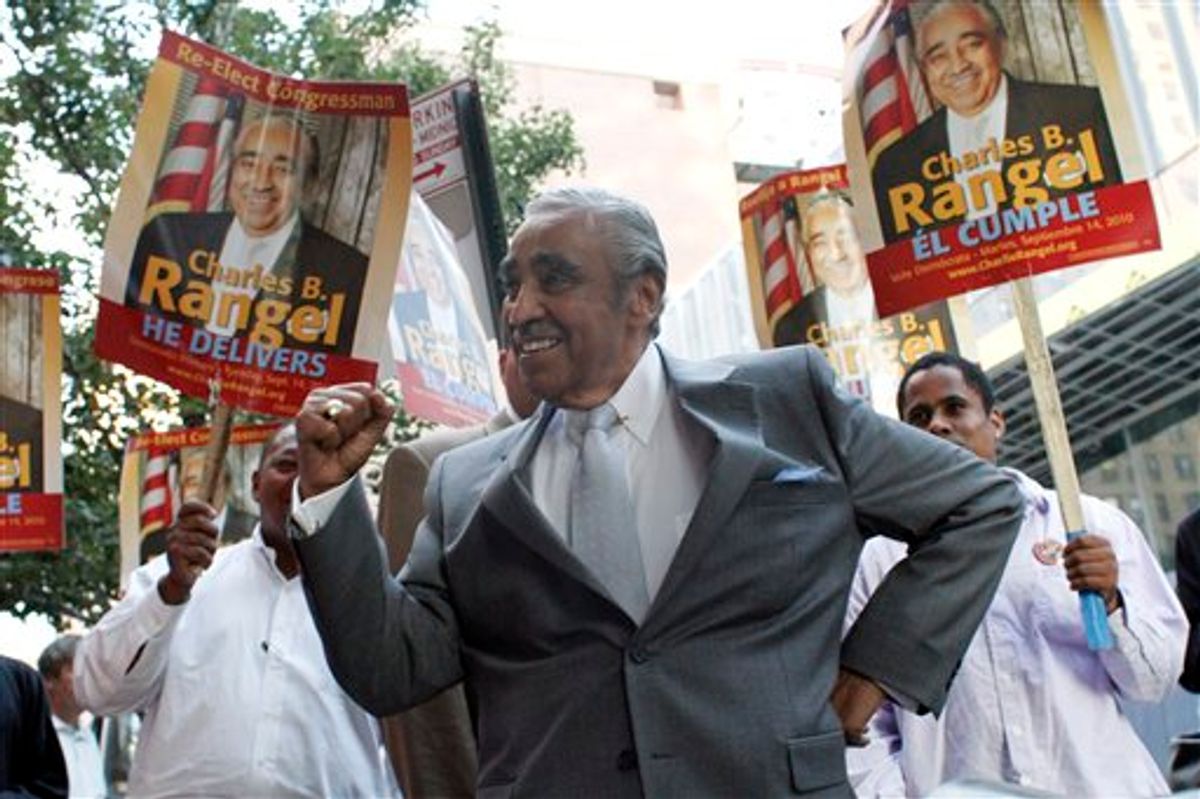 Congressman Charles Rangel pumps his fist while surrounded by supporters after attending a debate sponsored by the League of Women Voters, Thursday, Aug. 26, 2010 in New York. (AP Photo/Mary Altaffer) (AP)
--

On one side is severely ethically-challenged Rep. Charlie Rangel, who seems to be trying his best to hurt his party's chances in the midterms. On the other is his main opponent, Assemblyman Adam Clayton Powell IV, who has a recent conviction for driving while impaired, has not introduced a single bill in the state legislature in the past five years, and has been accused of (but never charged with) rape twice -- once by an intern.

This is the choice faced by Democratic voters in the 15th congressional district of New York on primary day Sept. 14.

Today the New York Times profiles Powell, who is the most prominent of several Democrats challenging Rangel and whose father, Adam Clayton Powell Jr., was unseated by Rangel in 1970.

Both of the rape accusations came in 2004. The first, by a 19-year-old Assembly intern, was later recanted. Powell admitted to having consensual sex with the woman. He told the Times the relationship was innapropriate explained that "inappropriateness is a lot of things":

Mr. Powell conceded that the relationship with the intern was “inappropriate,” but added that “inappropriateness is a lot of things.” He welcomes comparisons with Mr. Rangel. “If the worst I have is a violation because somebody thinks I had one too many, I will take it,” he said of his conviction for driving while impaired.

A couple months after the May accusation by the intern, a 38-year-old woman claimed that Powell raped her in her Central Park West apartment after a night out. He vehemently denied the charges and prosecutors investigated and did not bring charges.

Apart from his tarnished reputation, Powell's legislative career has been less than impressive. Again from the Times:

Over the last five years, he has not introduced a single bill, according to a legislative database. He disputed that figure, though he seemed fuzzy on the details. “I passed one this year, or maybe last year. But within the last term, certainly,” he said.

He said he had chosen his battles carefully: He recalled sponsoring a bill that exempts many elderly people from paying rent increases. “In the type of district I represent, people have bigger concerns than what kind of bird will be the official bird for New York,” he said.